Disruptive Reliance Jio on the road to 4G leadership

Continuing from our earlier post on India in October.

According to this BGR news report:


2017 was a significant year for Indian telecom during which 4G became the new norm. Usage exploded riding primarily on Reliance Jio — the 15-month old network that is already the world’s fastest-growing telco — and the effects trickled down to other operators too. Nearly 4 million TB of 4G data has been consumed by Indians this year, according to a TRAI estimate. Consumers relished swathes of data sometimes “effectively free” and sometimes at incredibly low prices, and hordes of first-time smartphone buyers were inducted into the world of mobile data. The year came to be defined by the stiff price war between incumbent telcos and disruptor Jio.

According to this tweet by Neil Shah, Counter Point: 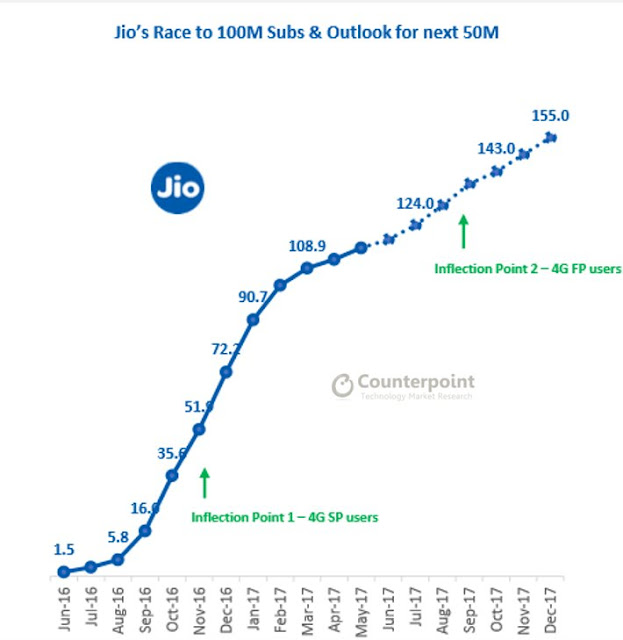 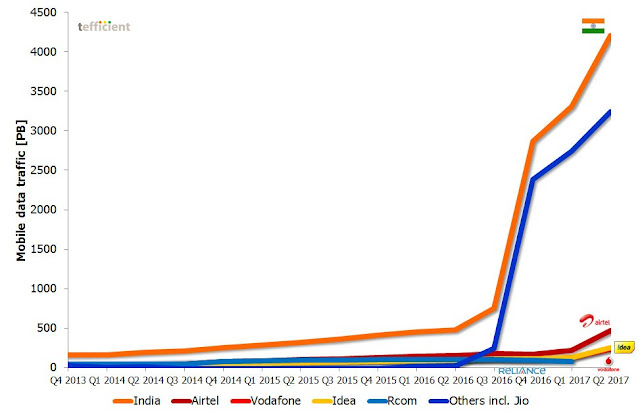 A similar picture was reported by Tefficient:


These customers generated 3780 petabyte of mobile data. It's by far the biggest network in the world. The graph suggests that might be around 80% of India's total - Q3 isn't reported by the others yet. Per subscription, that is 9,6 GB per month which means that Jio might challenge the global usage leaders of the world - 3 Austria, DNA and Elisa Finland and FarEasTone and Taiwan Mobile from Taiwan.


Its interesting to note that no only are Reliance Jio's users the highest data consumers in the world, its also driving India's infrastructure building activity. According to the newspaper report below, Reliance Industries has been responsible for 45% of capex spend in India in the last 3 years.


India's current mobile data subscriber penetration stands at 40 per cent which is expected to double to 80 per cent by 2022, according to Crisil's predictions.

"LTE services have taken the leading role in the unprecedented increase of data users in the past year, in large part thanks to Jio," the report said.

The 3G4G Small cells blog has a post on small cells rollout in India here. In addition, Tareq Amin, Senior Vice President, Reliance Jio Infocomm recently spoke in the TIP summit. His talk is embedded below.


One could argue that rolling out 4G can only be considered successful if the end users can reliably make use of it. According to Opensignal blog:


As we saw in our latest State of LTE report, published in November, LTE availability in India is remarkable: users were able to connect to an LTE signal over 84% of the time, a rise of over 10 percentage points from a year earlier. This places India ahead of more established countries in the 4G landscape such as Sweden, Taiwan, Switzerland or the U.K.

While LTE availability saw a meteoric rise, the same cannot be said of 4G speeds. In our latest State of LTE report, India occupied the lowest spot among the 77 countries we examined, with average download speeds of 6.1 Mbps, over 10 Mbps lower than the global average.

Meanwhile Jio trended the opposite direction in 4G speed. In our April report Jio had the slowest 4G speed in our India tests, but as soon as Jio’s freebie plan ended in April 2017, we recorded an astonishing 50% increase in their speed (from 3.9 Mbps to 5.8 Mbps) over the course of six months, which still placed Jio at the lowest end of the speed spectrum but with a significantly narrower gap.


When it comes to mobile internet speeds, where 3G and 4G LTE are considered together, India comes in the 109th place in the world according to data collected by Ookla.


Doug Suttles, co-founder and general manager at Ookla said, “Both mobile and fixed broadband internet in India are getting faster, that’s good news for all Indian consumers no matter which operator or plan they use to access the internet. India still has a long way to go to catch up with countries that have top speeds around the world, however, we at Ookla are highly optimistic about the capacity for growth that is available in the Indian market and looks forward to watching how the market grows in this coming new year.”


2018 may probably be the year India gradually transitions from being a developing 4G country to become a full-grown 4G power.

Posted by Zaffareen Khan at 18:23 No comments:

Turkey has had its fair share of drama regarding mobile networks and technology. For example fourth-generation (4G) mobile data network didn't arrive in Turkey until April 2016 thats nearly eight years after arriving in Scandinavia and South Korea.Turkish mobile phone users had to wait for bureaucratic issues and uncertain market conditions to clear up before they could use faster data connections. Moreover in 2015 Turkish President Recep Tayyip Erdogan claimed that his country does not need to upgrade to the 4G system. Instead, Erdogan said, Turkey should leap forward to the more advanced 5G network in two years. This was a rather bizarre statement considering 5G technology does not exist and will not for a few more years.

One expert, a senior engineer and product manager at Turkey’s leading mobile phone company, Turkcell, talked to Al-Monitor on condition of anonymity. He said that the most optimistic estimate for 5G’s first use around the world would be 2020. “The hope is to use 5G at the Tokyo Olympics,” the expert said, adding that Erdogan’s estimate of two years “does not appear to be technically possible.” The lack of a 4G network would slow down every facet of the Turkish economy — business, industry, transportation, communication and government — and undermine Erdogan’s ambition to turn his country into one of the top 10 global economies by the next decade.

So why this delay in bulding 4G? According to Fusun Sarp Nebil, one of Turkey’s leading telecommunications experts, Turkey's adoption of 4G is not the first time that Turkey has been late to adopt an innovation in telecommunications.

“Turkey always follows technology belatedly. It took [four years] before ADSL Internet came to Turkey,” while “3G [mobile networks] arrived nine years after it did in the rest of the world.”

Central and local governments’ delays and inadequacy explain why the development of wireless and landline Internet is moving at a snail’s pace in Turkey. For Nebil, a major problem is the extremely high tax burden on consumers. The Finance Ministry recently admitted that an exorbitant 60% of what Turkish consumers pay on their mobile phone bills goes to taxes. That is, for every 40 Turkish liras ($15) of minutes and data that customers pay their mobile service providers, they pay 60 Turkish liras ($23) to the Turkish government. (By comparison, US customers pay about 17% in federal, state and local taxes.)

However Turkey has now launched its self-declared '4.5G' network. Turkish mobile operators have engaged in even more impressive marketing stunts to sell new phones and data plans. The market leader Turkcell appeals to popular and patriotic sentiments with its “bagliyiz biz” (we are tied / connected / loyal to each other) campaign. Vodafone, with its “4 bucak g” (4 corners g) campaign, showcases folk dancers from the four corners of Turkey performing their own regional dances as well as those of other areas. Former telecom monopoly Turk Telekom (previously Avea) takes a different route and uses Portuguese soccer star Cristiano Ronaldo to emphasize its 4G network’s speed.

Currently Turkcell is the leading mobile phone operator of Turkey,based in Istanbul. In February 1994, Turkcell started Turkey’s first GSM network. In Q3 2012, it had a market share of 52,4%. Its competitors were Vodafone with a market share of 27,9% and Avea with a market share of 19,7%. The introduction of this '4.5G' infrastructure and an increased smartphone ownership, mobile-based internet and data services in Turkey have grown, this, in turn, has boosted revenues for the country's mobile operators.

As of June 2017, Turkey had some 76.6 million mobile subscribers, including machine-to-machine communication (M2M) subscribers, which corresponded to 96 percent a penetration rate.

Since April 2016, there was a quick transition from 3G to 4.5G subscriptions and at the end of June 2017, the number of 3G subscribers dropped to 13.2 million, while the number of 4.5G subscribers reached 59.8 million. So much so, internet and data accounted for 71.1 percent of Turkcell's, 61.2 percent of Vodafone's and 51.4 Türk Telekom's total revenues in the second quarter of this year.Online music and video streaming services, internet TV, and social media applications have mainly driven the growth in mobile data usage.

However Subscription plans also do not come cheap. Modest plans with 2 gigabytes (GB) of data, 1,000 text messages and 1,000 minutes of phone calls vary between 35-50 Turkish lira ($12 to $17). But some plans with 15 GB of data can reach as high as 159 Turkish lira ($55), including taxes and other fees. For a country where the net minimum wage is 1,300 Turkish lira ($457), even the cheapest data plan seems like a luxury. To boost consumer demand and usage, Turkey must create a mature 4G network and, more importantly, a robust Internet infrastructure.

As a result Kozan Demircan, one of the country’s leading technology experts, calls the new '4.5G' an “April Fool’s joke” because Turkey simply does not have the fiber optic network to support the promised connection speeds. High levels of fiber optic penetration (an area in which Turkey comes up short) enable high-quality connections between personal computers, mobile devices and cell towers.

These shortcomings slow connection speeds. Demircan points out that “whereas the targeted speed with 4.5G is around 330 to 400 megabits per second [Mbps], average connection speeds are 30-40 Mbps.” Although those figures are a respectable improvement over actual speeds of 14 Mbps on the 3G network, even those limited speeds are not available to Turks who live in major cities such as Istanbul and Ankara. (According to Akamai Technologies, a global content delivery company, Turkey’s average Internet connection speed was 6.2 Mbps in the third quarter of 2015.) As Demircan warns, there is a positive relationship between high broadband Internet penetration and its contribution to high levels of national income.

So why does Turkey not dedicate itself to a truly viable and progressive 4G that would help to grow its economy?

One major problem is the Turkish state’s inability to open up the market to competition. In particular, Turk Telekom, which owns most of the fiber optic network thanks to its former status as Turkey’s telecom monopoly, does not want to share its property with service providers. Also Turkish municipalities continue to charge exorbitant fees whenever service providers attempt to lay new fiber optic cables.

A bigger challenge is the allegation that the Turkish state and the ruling Justice and Development Party (AKP) view high-speed Internet with suspicion. One Turkish Internet expert and former government employee told Al-Monitor alleges that Gezi protests of 2013 and the Gulen-AKP fallout in early 2014, the state — especially the national security apparatus — has become wary of very high Internet connections. “You cannot upload high-quality videos or extended audio files on the 3G,” said the expert. So there is not much enthusiasm to improve conditions through the 4G network.

Due to the delays and problems in 4G there is unfortunately a real possibility that Turkey will also be late in adopting 5G and that means falling further behind in economic development. Hopefully this can still be remedied.

Posted by Zaffareen Khan at 12:00 No comments: