The political unrest, civil war and violence in Iraq has battered the telecommunications sector and created a very challenging environment for mobile operators.  The unstable economy combined with a decrease in consumer spending – along with the destruction of telecoms infrastructure; has resulted in declining mobile subscriber rates and revenues.


However the Iraqi telecom market made a recovery starting in 2016, and is forecast to reach 34 million subscribers by 2017, exceeding its 2014 pre-Daesh level, according to GlobalData. 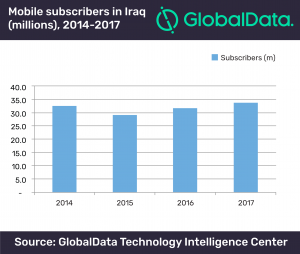 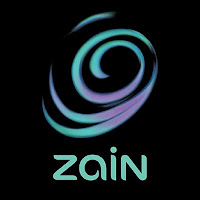 Zain is the largest mobile phone operator in Kuwait but also has operations in Bahrain, Iraq, Jordan, Lebanon, Saudi Arabia and Sudan and manages a unit in Morocco. Zain Iraq is the largest mobile operator in Iraq by subscribers that amount to 13.7 million by end of 2017. The company is headquartered in Baghdad and covers 97% of the Iraqi population nationally. 3G services were first launched by Zain in 2015, followed by the other mobile operators, all using the 2100 MHz band. LTE services have been deployed in northern Iraq in the 1800 MHz band by Alcatel-Lucent and Regional Telecom. 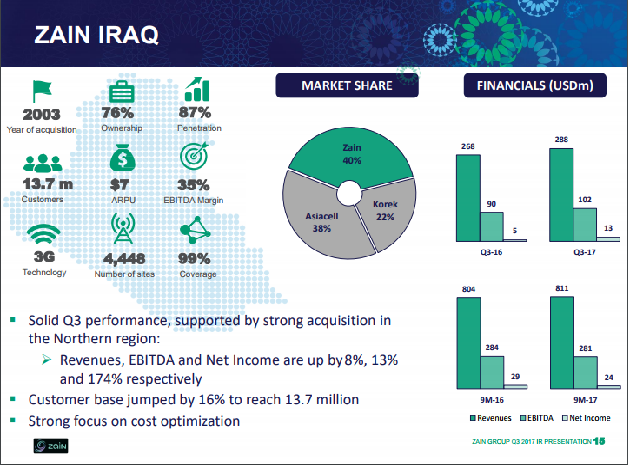 A deal has been made with Nokia who will modernize and expand Zain Iraq's 3G and 2G networks with a special focus on the holy cities of Karbala and Najaf, to support the expected increase in data and voice traffic during Zeyara/pilgrimage as millions of people converge on the region.

Zain Iraq has also been instrumental in rebuilding the network infrastructure and ensuring that the newly liberated regions of Anbar and Mosul receive the best data coverage in terms of 3G. 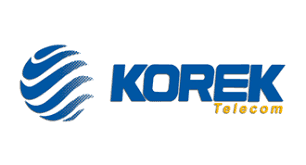 Korek Telecom: Korek, in which Orange has a stake, started operating in 2000, earlier than any other operator in Iraq. It has had an Iraq-wide licence since 2007 and its network is nationwide was reported as of January 2016 to employ about 2,500 people, to have deployed 3,500 towers and to be serving 7 million subscribers, giving it just over 20% of an estimated national Iraqi subscriptions base of about 34 million and showing a roughly doubled market share since 2011. Korek has some advantages, i.e. a relatively secure base in Kurdistan, where it has been reported to have a 70% share, and a good relationship with the local government, which now has an assured income from its 17% share of national oil revenue. Through further market share gains, Iraqi national growth, diversification into markets like banking and social stabilisation, as well as the lack of fixed infrastructure in Iraq, it is possible that Korek could double in size in the next five years.

Asiacell claims nearly 12.5 million customers with a network that covers 99.06% of the Iraqi population. Asiacell was the first mobile telecommunications provider in Iraq to achieve nationwide coverage, offering its services across all of Iraq’s 19 governorates including the national capital Baghdad and all other major Iraqi cities.

Asiacell is also claims to be the best internet provider with its 3.9G data services, offering the best network coverage in the entire of Iraq since January 2015.

Future challenges development:
Despite the challenges there is high international interest in the Iraqi market with its potential to recover economically pinned on its large oil and natural gas reserves. Iraq offers much potential for telecoms infrastructure development with many under-served areas requiring better coverage and/or reconstruction. There will also be opportunities in developing both 3G and 4G deployment, with early signs that mobile data revenues are already increasing on the back of existing 3G networks.

Prior to the more recent unrest 4G LTE had been deployed in some areas of Iraq and there was also a progressive fibre optic network underway across parts of the country. While it is unknown how widespread the damage to this infrastructure has been, the country is still moving forward with the Ministry of Communications (MoC) recently launching a Fibre-to-The-Home project. This will see an initial 90,000 lines deployed across selected governates.
Overall the current security situation is severely and negatively impacting telecommunications development in Iraq. However, there are positive signs for a future of improvement, stability and reconstruction.
Posted by Zaffareen Khan at 08:47 No comments: Links to this post

Mobile Operators in the sprawling archipelago nation of Indonesia are transitioning their networks  to meet the demands of the latest technologies and an increasingly connected population.

Indonesia, a country with nearly 410 million mobile connections, experienced rapid uptake of 4G services over the past year, with connections increasing 2.5-times and LTE penetration hitting 21 per cent.
The country’s 4G connections jumped from 34 million in Q3 2016 to 85.5 million in Q3 2017, according to data from GSMA Intelligence (GSMAi). LTE penetration in Q3 2016 stood 7.9 per cent.
To support the growth, mobile operators almost doubled the number of 4G base stations deployed in the opening six months of 2017, with 55,700 sites at end-July compared with 26,000 at end-2016.

In developed countries, the internet is everywhere. In homes, if not then readily available in schools, coffee shops and libraries. In developing countries this is not the case, if it were not for mobile phones, millions of people would be left on the losing side of the divide. As we can see in this chart, the vast of majority of people in Indonesia (and other countries) use the internet exclusively on mobile devices

The country’s mobile market was characterised for many years by the large number of players licensed by the local regulator. Seven mobile operators are competing for revenues in the Indonesian market: Telkomsel, Indosat, XL Axiata, 3 Indonesia, SmartFren, Bolt and Bakrie Telecom (BTel). Market leader Telkomsel continues to maintain a huge presence but is under increased threat from the competition. 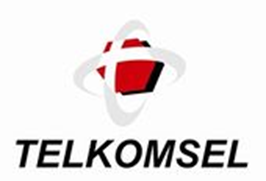 Telkomsel has a market share of about 44% in Indonesia and is the only operator which is active in all provinces. It had 180 million users in late 2017 making it the 6th largest cellular provider in the world. It is 65% owned by the state through Telekom Indonesia, the remainder owned by Singapore Telecom.

The operator, with a 44 per cent market share, sourced network equipment for the deployment from Ericsson, Huawei, Nokia and ZTE. It is using 20MHz of 1.8GHz spectrum combined with 4×4 MIMO technology in the country’s capital city Jakarta and also Medan, Bandung, Denpasar, Mataram, Pontianak, Makassar, Manado and Ambon.

Telkomsel paid Rp 1.01 trillion ($74.7 million) to secure a license for a 30-megahertz band on the 2.3 gigahertz spectrum, which will enhance its capacity to offer wireless broadband services across the country.The new license means that Telkomsel now has a total band of 77.5 MHz on the 2.3 GHz, 2.1 GHz, 1.8 GHz, 900 MHz and 800 MHz spectrums.

The operator said they have deployed at least 5,200 4G base stations in 180 cities across the country to date. It had about 12 million 4G subscribers in Q3 2017 and expects to have 15 million by the end of the year, accounting for nearly 9 per cent  of its mobile users, according to GSMA Intelligence.


According to Open Signal Telkomsel was well ahead of its rivals in 4G speed, averaging downloads of 14.6 Mbps in their tests. However 4G availability was where they fell behind their rivals.

Indosat, Indonesia's second-largest telecommunications operator had about 82 million mobile subscribers last year, compared with Telkomsel's 180 million.  It has a good coverage on the main islands of Java, Bali, Kalimatan, Sulawesi and Sumatra, at low prices. 4G/LTE has started in Jakarta, Bandung, Yogyakarta and Bali and is available in about 94 cities at the end of 2016 on 900 and 1800 MHz with speeds up to 185 Mbps: 4G coverage map. In 2017 they bid for further spectrum on 2100 MHz.

XL Axiata is the 3rd provider in Indonesia. According to its website they have 46.5 million subscribers.  It is owned by Axiata Ltd. and has about a 90% coverage on these islands: Java, Bali and Lombok. Furthermore, it covers cities on Sumatra, Kalimatan, Sulawesi and a very limited coverage on Papua. Where it has 3G, speeds are often faster then Telkomsel. 4G/LTE has started in Jakarta, Medan, Yogyakarta and is spread to other regions like Bali, Lombok, Surabaya and East Kalimatan and Sulawesi on 900 and 1800 MHz.

As at 31 October 2017, XL Axiata says it had  rolled out 4G LTE services to around 100 towns and cities in Indonesia and had more than 20 million 4G subscribers nationwide, using a network comprising 16,000 BTS. At the same date, its total number of ‘on-air’ base stations had reached nearly 100,000, of which more than 44,000 were 3G-equipped. 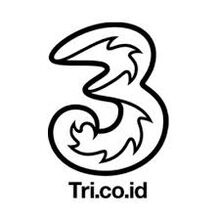 3 called Tri in Indonesia is now the 4th provider with approximately 21 million  subscribers  previously with the lowest coverage, but the cheapest rates. However the mobile operator controlled by Hong Kong-based CK Hutchison, has revealed that its in-deployment 4G LTE network is now available in 227 cities and districts, including 1,769 sub-districts and 7,296 villages in 25 provinces. Their coverage extends from Lhokseumawe to Manado, and includes the islands of Sumatra, Kalimantan, Sulawesi, Java and Bali. Commenting on the development, Tri Indonesia President Director Randeep Sing Sekhon said:

‘Digital and multimedia services are expected to experience rapid growth this year. And in future the success of these services is reliant on [Tri rolling out] mobile internet infrastructure to support growth, as it is expected to become the main channel to carry such services’.

People wishing to sign up to the Tri 4G LTE network will need to buy a suitable 4G LTE SIM card and handset. Customers can exchange their old Tri 3G to 4G SIM card without extra charge at any 3Store.

Smartfren owned by Indonesian PT Smartfren Telecom Tbk is a major player in the country. It had around 13 million customers in 2016 and has now migrated entirely to LTE. In 2016 Smartfren started the most widespread andfastest LTE in the country so far. It employs LTE Advanced that reaches higher speeds through carrier aggregation. But two rare frequencies are used: 850 MHz FDD (Band 5) and 2300 MHz TDD (Band 40). Already 5 million customers have been migrated to LTE.

Smartfren's coverage is on the islands of Java and Bali, parts of Sumatra, Sulawesi, Lombok and Kalimantan. It started 4G/LTE in 25 centers so far and reaches 188 cities in 2016.

Since Smartfren phased out its 3G network, it has an impressive 4G network in terms of reach for those 2G and 3G customers to migrate to. According to Open Signal Smartfren testers were able to find an LTE signal more than 90% of the time, winning Smartfren their 4G availability award. 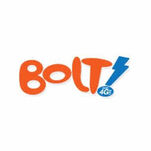 Bolt! owned by Internux is an Indonesian wireless broadband provider based on TD-LTE. It started in 2014 and has already 3 million customers in 2017. It uses the rare 2300 MHz TD-LTE (band 40) that is not covered by usual devices. That's why you are likely to buy new hardware for them. It only operates so far in the cities of Jakarta and Medan. Therefore it's more like a substitute for a landline ADSL-provider than a travel option.

The smallest and troubled mobile operator owes the government millions of dollars in licence and frequency rights fees. It originally launched CDMA service in 2003 in Jakarta, West Java and Banten and started to offer fixed wireless service in 2007. It had about eight million subscribers at its peak. Last year the Ministry of Communications and Information Technology revoked its fixed wireless access (FWA) and fixed licences. Huawei have recently acquired a near 17 per cent stake in Bakrie Telecom.

Questions for the future: Can the Indonesian market sustain this number of mobile operators? Who will win the 4G and subsequent 5G race?
Posted by Zaffareen Khan at 08:56 No comments: Links to this post