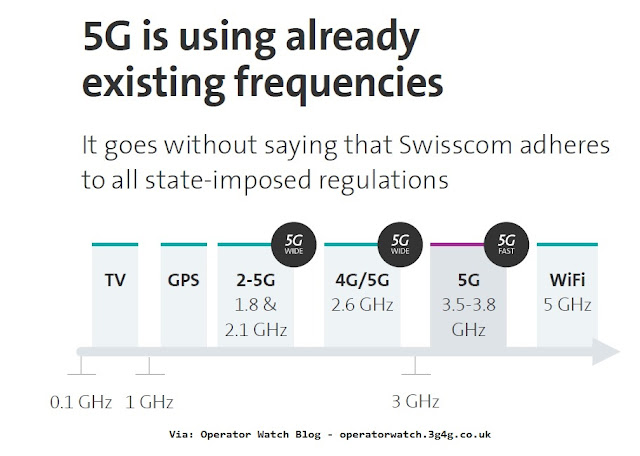 We wrote a detailed post about 5G Spectrum auctions in Switzerland earlier this year. Now Swisscom has recently announced the launch of its 5G network this month (May 2019):

Long-awaited and available from May: Swisscom presents the first commercially available 5G smartphone in Switzerland. The Oppo Reno 5G is set to make the 5G mobile telephony standard a reality for residential customers. The range of 5G-capable devices will continue to be expanded.

Following the first prototypes at the end of 2018, Swisscom can now announce four end devices for sale. The very first 5G device in the Swisscom shop comes from the manufacturer Oppo, followed by other brands such as LG (from May), Samsung (from July) and Huawei (third quarter). 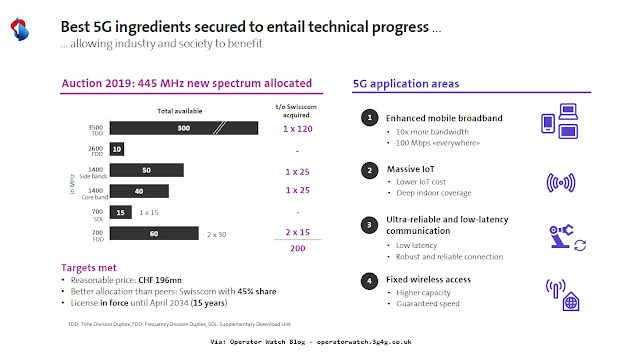 As can be seen in the picture on the top and the one above, Swisscom has a variety of spectrum available but is also refarming 2G & 3G to use 4G. This way Non-Standalone (NSA) 5G could be used with 4G. So what is happening with Swisscom 2G & 3G:

As soon as the Federal Office of Communications grants the licence, Swisscom will activate the 5G network which it has established with technology partner Ericsson. The first 5G devices run on a proven frequency in the 3.5 gigahertz band, which was previously used for outdoor TV reports and has now been approved by the federal government for mobile communications. This frequency is designed to achieve speeds of up to 2 Gbit/s (5G-fast). During the media event, Swisscom demonstrated a peak speed of 1.86 Gbit/s. "As number one, we are responsible for our country and must think ahead," says Urs Schaeppi. "We invented prepaid in 1996, introduced Mobile Unlimited as a world first in 2004 and were the first to build a 4G network in 2012. We intend to ensure Switzerland remains an innovation location. We have therefore been shaping the development of 5G in international committees since 2016 and are working on a modernisation of NIRO." By the end of the year, Switzerland will be supplied with 5G; this includes cities, the countryside and the mountain regions. Known as 5G-wide, this stage of the expansion uses frequencies that permit extensive coverage. Customers everywhere will benefit from faster response times, greater bandwidths and, thanks to technology sharing with 4G, higher speeds.

It should be noted that Swisscom also won 700 MHz spectrum in the auctions earlier, so it's a matter of time before we see 5G Ultra-wide or something similar later on.