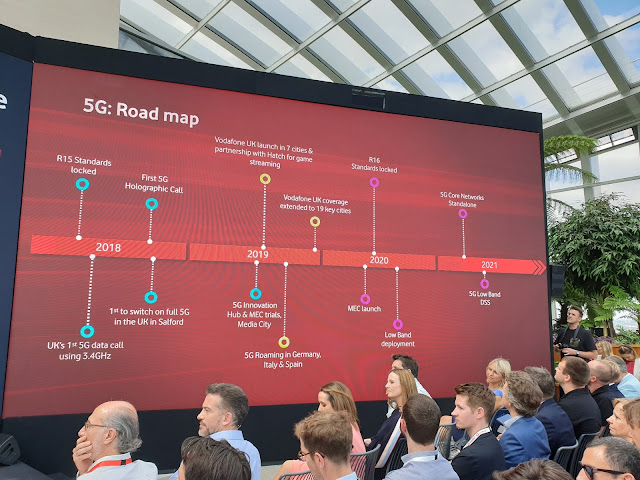 When we looked at the UK Operators 5G plans on this blog last year, we didn't expect the operators to innovate in pricing and business models the same way they are innovating in technology. There were some nice surprises in Vodafone's 5G launch event yesterday.

Let's start by looking at the roadmap shown above. Initial 5G network is launched in 7 cities including London. The service will be available from July 10 on Vodafone’s unlimited mobile data plans at no additional cost for 5G. Over the summer, 5G roaming will be available in the U.K., Germany, Italy and Spain, more countries will be added to later on.

Next year, 2020, it's launching MEC and low band (coverage layer) 5G. The initial 5G is on Capacity layer, C-Band as we detailed in this post earlier. In 2021, Standalone (SA) core network and Dynamic Spectrum Sharing (DSS) will be launched. DSS allows refarming of existing LTE bands in a way that LTE & 5G can both operate simultaneously.

According to TMN, The most notable thing is that Vodafone is deploying sites where ever it can with 64T/R Massive MIMO. Even though it is only using 40MHz bandwidth of its 3.5GHz spectrum (as per EE), this gives it the ability to extend coverage if it needs to, but also generate an effectively increased capacity via increased spectral efficiency. EE does have some 64T/R Massive MIMO sites, but it is generally speaking using an 8T/R setup for the majority of its sites. Vodafone will have some 8T/R sites where it cannot get enough site space for the larger and heavier, and more power hungry, antennas. But its default seems to be to go for the more extensive optoin. Three has also deployed 64T/R, and it has much more midband spectrum than the other two operators – but the Vodafone launch shows that Three is by no means the only UK operator to deploy massive MIMO across most of its sites, as it appeared to claim at its launch earlier this week.

According to Fierce Wireless, In London, Vodafone is using 5G equipment from Ericsson’s Radio System portfolio, including Ericsson’s Baseband 6630 and Massive MIMO 6488 products to enable 5G on the 3.5 GHz frequency. Vodafone is tapping Ericsson’s dynamic spectrum sharing (DSS) technology, which allows Vodafone to combine 5G with LTE in the same spectrum band. Dispensing with the need to separate out sections of spectrum for 5G, Vodafone has been able to quickly extend 5G coverage over a wide area. When in use, the 5G technology delivers speeds 10 times faster than LTE. 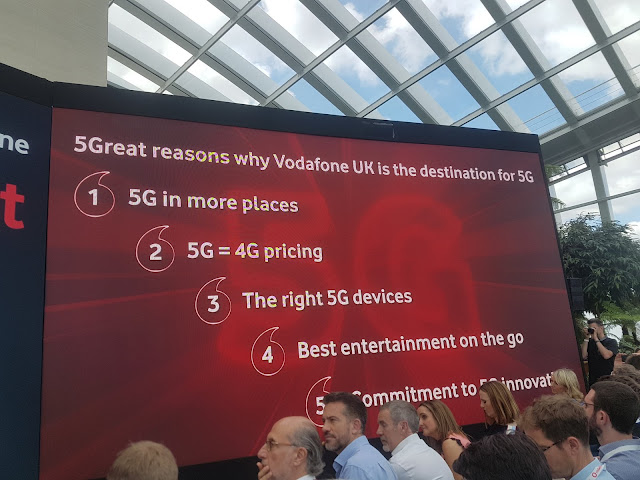 As the picture above shows, 5 Great reasons why Vodafone UK is the destination for 5G. I guess the main reason is 5G = 4G pricing.

Also, this is the first time a UK operator has all plans with unlimited voice & SMS (nationally only) and unlimited data. The pricing is set on what maximum speeds a user can get. Most people would go for the Unlimited Max package.


Here's the demo. A use case you didn't know you needed 😄 pic.twitter.com/MYMHHT4XeP
— Phil Kendall (@philkendall_SA) July 3, 2019

This is a good demo to show low latency that 5G will provide.