Africa: The Race For No. 2 Operator

MTN is the largest mobile operator group in Africa with roughly 168 million subscribers, but who is number 2?

Airtel just crossed 100 millions subscribers in Africa and many news sites have started calling them the second largest operator group in the region. Livemint for example reported:

Bharti Airtel’s Africa arm has crossed the 100-million customer mark across its operations in the continent, the company said in a statement on Wednesday.

This is significant for the company, which entered the continent in 2010. Airtel Africa is currently the second-largest mobile operator in Africa by the number of active subscribers; South Africa’s MTN is the largest.

Airtel Africa is the holding firm for Bharti Airtel’s operations in 14 countries in the continent across three regions — Nigeria; East Africa, comprising Kenya, Uganda, Rwanda, Tanzania, Malawi and Zambia; and the rest of Africa, including Niger, Gabon, Chad, Congo Brazzaville, the Democratic Republic of the Congo, Madagascar and Seychelles. Nigeria alone accounts for almost half of its earnings before interest, taxes, depreciation and amortisation (Ebitda). 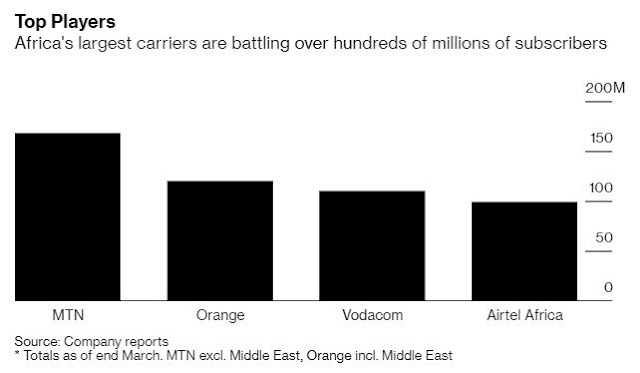 According to this Bloomberg article, back in July 2019, Airtel was the 4th largest by subs numbers.

There is a small caveat though. While MTN does not include Middle East, Orange does. Again, Vodacom includes Safaricom in which it has around 35% stake. Vodafone, Vodacom’s parent (64.5% stake), had an additional 49.3 million customers in its operations in Egypt and Ghana at the end of June. If we include Vodafone, Vodacom and Safaricom, it would be going head-to-head with MTN for the top place.

The Guardian, Nigeria has a good summary of the top 4 mobile operators in Africa here.