BT's Converged Core to Launch in 2023


Howard Watson, CTIO, BT lays out a vision of convergence where fixed, mobile and WiFi networks are being enhanced to deliver a next generation experience to the end users #TTCongress @totaltelecom pic.twitter.com/YTUa3Qtl3a
— 3G4G (@3g4gUK) October 30, 2018


While those slides are not publicly available, a similar set of slides are available here on BT's homepage from Barclays CTO Conference earlier this year.

This year, Howard Watson was able to expand further on their vision for converged core of the future.


The slides in the tweet above gives a good idea of BT's vision of convergence where their fixed broadband customers and mobile customers from BT, EE, Plusnet & Wholesale along with Wi-Fi can get the same consistent experience regardless on where and how they access the network. 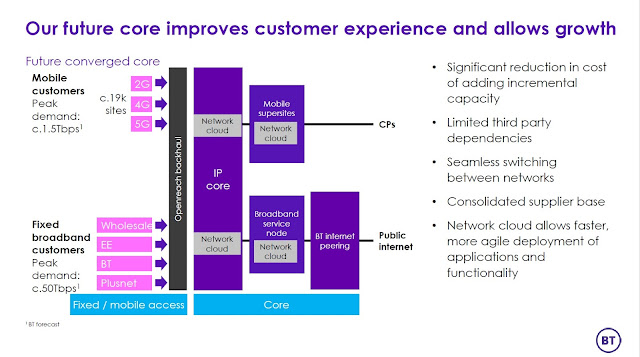 Total Telecom wrote a nice summary from the congress, part of which is reproduced below:

BT’s Hybrid Network, to be launched in 2023, will be comprised of the company’s mobile, fixed line and WIFI networks, offering customers ever present, gigabit connectivity
Consumers in the UK are increasingly intolerant of complexity, even as they begin to demand ubiquitous, gigabit capable connectivity, according to BT’s CTIO.

Speaking at the Total Telecom Congress in London on Tuesday, Howard Watson said that while consumers were essentially technologically agnostic as to how they received their connectivity, they were becoming increasingly demanding about the speed, quality and reliability of that connection.

At last year’s Congress, Watson announced that BT would be launching a fully converged, hybrid network that would offer seamless connectivity across the company’s mobile, fixed line and WIFI networks, with the aim to have all of its customers signed up to the network by 2023.

This year, Watson stressed the crucial role that WIFI and mobile connectivity would play in this hybrid next generation network.

“Whether you are connecting through fixed, mobile or WIFI, bound by intelligence and software driven common infrastructure, we truly believe we can transform the customer’s experience and deliver that seamless connectivity that they demand. We are in a unique position to do that because we are the only operator in the UK to build this type of network.”

“Making this happen is not east or trivial and we need to push the boundaries of the available technologies in terms of what they can do in terms of coverage, capability and interoperability. We need to rollout new technologies like 5G and WIFI 6 across the whole of the UK.”

BT was the first operator in the UK to launch 5G mobile network services through its mobile subsidiary, EE, which now has a 5G presence in 20 towns and cities cross the country. BT has subsequently launched 5G for its own brand customers and Watson said that EE and BT would try to provide 5G network coverage in an additional 25 towns and cities across the UK by the end of 2019.

Earlier I wrote about how the new 5G Core Architecture promoted Fixed-mobile convergence (FMC) and also another feature called Access Traffic Steering, Switching and Splitting (ATSSS) would play a key role in convergence. It is very likely that BT is moving in that direction for their converged core.

While the slides from Total Telecom Congress is not publicly available, they are present in BT's Technology’s Business Briefing here.