Turkmenistan:Finally opening up to the future? 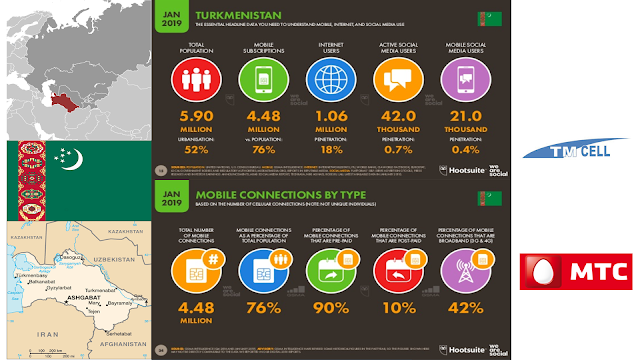 There has been slow growth in telecom services in Turkmenistan which is attributed to the slow development of the private sector and state control over most economic activities.

Turkmenistan’s mobile market had experienced extraordinarily strong growth over 2007 to 2012 period. Over the 2013 to 2018 the mobile market increased at a much slower pace, as the market has moved closer to a saturation phase there has been an inevitable slowing in the growth rate. However there has been a strong increase in mobile broadband penetration over the past four years however the mobile broadband market is still at an early stage of development and penetration remains relatively low compared to other Asian nations. Very strong growth is predicted over the next five years to 2023.

Turkmenistan has experienced a number of problems relating to communications technology. Despite efforts to upgrade the country’s telecom infrastructure, the telephone network remained poorly developed and many villages have been left without telephone services. Fixed line penetration over the past four years has been increasing slowly from a relatively small base.

Altyn Asyr is the only operator in Turkmenistan. It's state-owned and works under the TM CELL trademark. Its 2G/3G coverage is pretty good and reliable all over the country. 2G GSM is on 900 and 1800 MHz, 3G up to DC-HSPA+ on 2100 MHz. 4G/LTE started in Ashgabat and Türkmenbaşy in 2013 on band 7 (2600 MHz), is in active development nowadays, already available for all users including prepaid without any surcharges.

MTS Turkmenistan (MTS TM) was historically the first mobile operator of Turkmenistan. It was fully owned and controlled by Russian MTS. It has been previously shut down in 2010 by the government after a dispute and re-opened again in 2012. In 2017 it served nearly 2 million subscribers, before it was shut down again in September 2017. In 2019 Russia-based Mobile TeleSystems (MTS) is said to have begun the process of dismantling its equipment in Turkmenistan with a view to fully withdrawing from the country.

In 2017 Turkmenistan’s Ministry of Communication is preparing for the launch of a new operator to offer services under the ‘Ay Nazar’ brand over infrastructure owned by TM-Cell (Altyn Asyr), which is a subsidiary of state-owned fixed line incumbent Turkmentelecom. Ay Nazar is being created within the structure of another state-owned telecoms provider Ashgabat Shaher Telefon Ulgamy (ASTU or Ashgabat Urban Telephone Network).

Turkmenistan is one of the most secretive nations in the world, all satellite TV reception was banned. That's why the internet remains the only accessible media from out of the country. Internet access in Turkmenistan is censored and heavily regulated available only to a small fraction of the population. Censorship is ubiquitous and extensive. Surveillance is significant, and the few citizens who benefit from access to the internet are closely monitored by state agencies.

While there is no 'firewall' like in China or 'blacklist' like in Russia, websites run by human rights organizations and news agencies are blocked. Moreover, ordinary citizens have no access to the WWW and instead are limited to the use of the Turkmenet, an online community in Turkmen language, but effectively a censored version of the internet. Social media and well-known western (and even Chinese) websites and services are blacked out, including LiveJournal, Facebook, Twitter, YouTube, WhatsApp, WeChat, Line etc. are not accessible through the Turkmenet. Note that attempts to get around this censorship by VPNs or proxys can lead to grave consequences.

In 2019 Turkmenistan has launched its own Biz Byarde (We Are Here) social network. All other social networks remain blocked in the country, including Facebook, Twitter, Instagram, Оdnoklassniki and VKontakte. Also VPN applications have been blocked in Turkmenistan from January 2019. Internet services are switched off when the VPN applications are activated on smartphones by Turkmenistan users. Then it's necessary to replace the SIM in order to continue using services.

Turkmenistan has also recently signed a MOU with South Korea who will share their know-how in 5G network technology with Turkmenistan and contribute to the Central Asian and Caspian region country’s commercial satellite development plan.