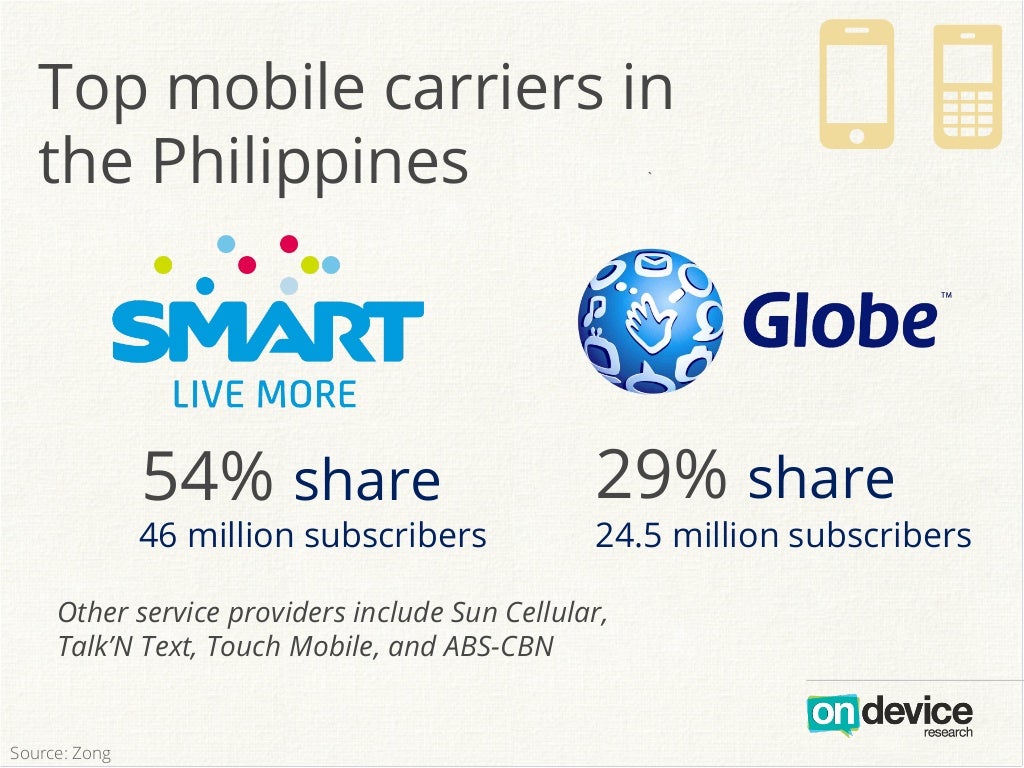 With the second-largest population in South-east Asia after Indonesia, the Philippines has a large consumer base for its mobile market. Penetration in 2012 reached 106%, or 102.3m subscribers, according to a report by PwC. Filipinos are also among the world’s most prolific texters, accounting for 10% of global SMS messages.

The two major network operators for mobile internet in the Philippines are Smart Communications and Globe Telecom, which combine to make a total of 83 percent of the market share. Sun Cellular is a distant third.


3G services
The roll out of the 3G network began in 2005 when the government opened bidding on five new 3G licences. Despite having five licences on offer, the NTC ultimately granted only four, as it argued that the remaining applicants lacked the capacity to effectively provide 3G services. The four successful companies included Globe Telecom, Connectivity Unlimited Resource Enterprise (CURE), Smart Communications (owned by PLDT), and Sun Cellular. Smart Communications, having acquired CURE in 2008, was itself acquired by PLDT in 2011. As a condition of the latter deal, PLDT agreed to relinquish its CURE licence.


Delays in spectrum allocation have been a drag on the region’s 3G uptake, which has been relatively slow. Low penetration of smartphones that are equipped for mobile broadband have also dampened growth.
All the same, growing data demand and the introduction of low-cost smartphones, such as the Nokia Lumina series unveiled in the Philippines in March 2014, paint a bright picture for the future of the industry.
LTE
Smart Communications was one of the first operators to introduce 4G LTE services in the Philippines. In August 2012, it launched LTE service at bands of 850 MHz and 2600 MHz, adding additional capacity at 1800 MHz the following month. These services are already available in larger cities such as Manila, Caloocan, Las Piñas, Makati, Quezon City, San Juan, and Valenzuela, according to Telegeography, a telecoms research firm.
The company is also set to expand this service further. In March 2014, it unveiled plans to extend its 4G LTE network to all major cities by the end of 2014 – areas including Bohol, Bacolod, Davao del Sur, Tagaytay and Ilocos Norte – thus reaching 50% of the population. In addition, the P32bn ($714m) of planned capital expenditures for 2014 will include expanding Smart Communications’ 3G coverage from its current coverage of 71% of the population to 100%.
Globe Telecom, too, is widening its networks. In November 2011, it launched a $790m programme to modernise its services, including the roll-out of a 4G LTE network in Makati, Manila, Pasig, Muntinlupa, Mandaluyong, Cebu City, Boracay and Quezon City. The company’s president and CEO, Ernest Cu, told OBG that the existing network infrastructure in the Philippines was built primarily to handle SMS traffic, which requires considerably less backbone capacity than data-intensive services. Now, in addition to expanding the company’s fibre optic network, Globe Telecom is seeking to standardise the communications protocols used for voice, SMS and data in order to further improve network capacity and help in future proofing the system. In 2014, capital investment in excess of $200m has been earmarked to further expand the data network and build additional capacity, which is becoming more important given high-end customers' growing mobile data needs.

Globe narrowly leads for LTE download speed, with an average speed of 6.1Mbps., slightly faster than Smart's 5.9Mbps. Internationally, however, both speeds are comparatively slow – with Australia ranked as the fastest country for LTE in the world, averaging 24.5Mbps earlier this year.

For upload speed the results are again very close, with Smart edging ahead of Globe with speeds of 7.2 Mbps. With speeds this close, as with the close download speeds above, most mobile users will not notice a significant difference unless they are downloading particularly large files, or using some other data-intensive service.

Smartphone penetration is expected to more than triple to 50 percent by 2015. Another positive: 88 percent of the total mobile internet population is below the age of 34.

The battle for smartphone supremacy will be fought (and won) largely on price, given that 20 percent of the population lives on less than US$1.25 a day (54 PhP). For example, local brands Cherry Mobile, My Phone, and Star Mobile offer Android phones priced between US$50 and US$250 (2191 PhP to 10,958 PhP). This range is expected to be the sweet spot that will drive further adoption of smartphones.

International brands are also getting in on the action. Chinese brands Oppo and Xiaomi plan to expand into the Philippines, while Huawei is already offering their Ascend G6 to Filipinos. Priced at US$228 (9,994 PhP), which is half the cost of the previous model known as the P6, the Ascend G6 represents the Chinese firm’s bid to capture 10 percent of the market for mid-priced smartphones.


The race to be the cell phone brand that dominates the Philippine market is wide open. At the moment, Samsung leads at 43 percent. No other cell phone manufacturer has larger than a 10 percent market share. Sony and Cherry Mobile each have seven percent, Lenovo has five percent, and LG, Alcatel, and MyPhone each have three percent.

The rising prevalence of smartphones will likely be the main driver of mobile revenues going forward, as consumers alter their preferences by reducing voice and SMS usage and increasing reliance on alternatives such Skype and instant messaging. While this may cause revenue losses with respect to these more traditional offerings, the wider range of data-driven services, such as applications, video-streaming and mobile gaming, will likely compensate over the longer term.


Posted by Zaffareen Khan at 12:50 No comments: