AT&T and Verizon are now tied for the rank of largest U.S. mobile carrier

Who leads the U.S. in mobile subscribers? According to mobile analyst Chetan Sharma, it’s now a neck-and-neck race between AT&T and Verizon who collectively controls 68 percent of the market. 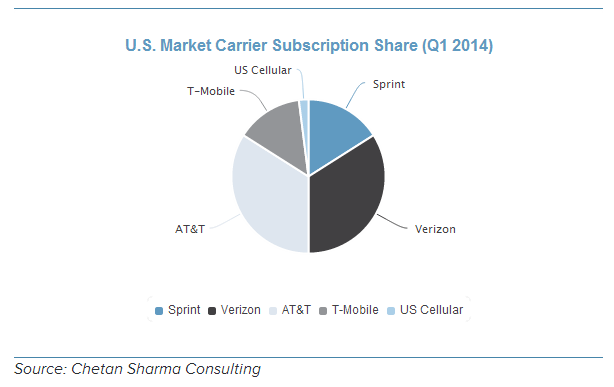 At the end of March, AT&T had 116 million total connections, but that number includes all of its wholesale subscribers (those that connect with one of AT&T’s mobile virtual network operator partners) and machine-to-machine links attached to cars, gadgets and other devices in the internet of things. Verizon doesn’t report any of those numbers. It only reveals business and consumer retail subscribers buying their service directly from Verizon. That number totaled 103 million.
If you only factored in AT&T’s retail prepaid and postpaid customers you would get 85.1 million, but AT&T has a substantially larger wholesale business Verizon. So by Sharma’s calculations just as many people are connecting their phones and tablets and hotspots to AT&T’s network as Verizon.
Any way you look at it, these two carriers are huge. They collected control 68 percent of the U.S. wireless market. It’s also interesting to note that if Sprint were to merge with T-Mobile – as Sprint’s new chairman Masayoshi Son is so keen on doing– the two would hold a combined 30 percent of the U.S. mobile market.
That’s still smaller than either Big Red or Ma Bell, but definitely qualifies as a mega-carrier. And it doesn’t leave much room for the other guys. The 125 or so regional and rural carriers in the U.S. accounted for a meager 2 percent of all mobile subscriptions.
Source
Posted by Zaffareen Khan at 09:48