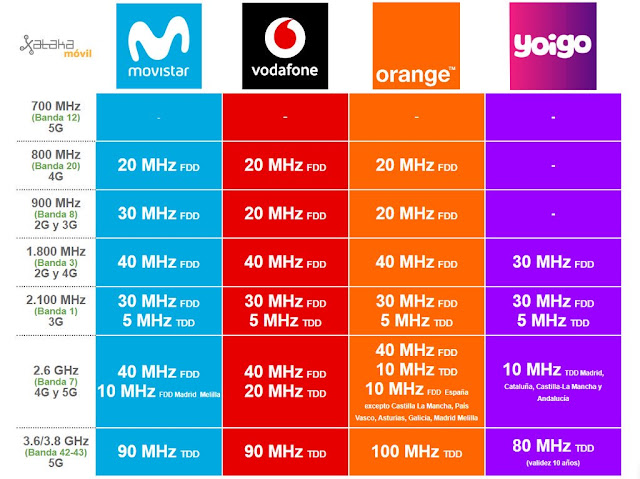 The above picture summarises the total amount of spectrum holding by all Spanish mobile network operators. Movistar is a major telecommunications brand owned by Telefónica, operating in Spain and in many Hispanic American countries. Yoigo, legally Xfera Móviles S.A., is the fourth largest mobile network operator in Spain, subsidiary of the Spanish telecommunications company Grupo MásMóvil.

Telefonica, Orange Spain and Vodafone Spain took the spoils in the country’s auction of 200 MHz in 5G-suitable frequencies, which netted authorities more than four times the original asking price.

Vodafone Spain won the largest allocation on offer, securing 90 MHz in the 3.7GHz band for €198 million. Telefonica paid €107 million for 50 MHz across the 3.6GHz-3.8GHz bands, while Orange Spain paid around €132 million for 60 MHz also across the frequency range offered.

Each operator will pay in annual installments, with the balance accruing interest each year. Including interest, spectrum reservation costs and other previously levied fees related to the auction, the Ministry of Economy and Enterprise said the treasury would earn €1.4 billion from the tender.

Spain’s other operator, MasMovil, competed in the auction but didn’t add any further 5G-suitable spectrum to the 80 MHz it obtained earlier this year from two separate deals.

The operator acquired 40 MHz from satellite company Eurona and then matched that allocation as part of its acquisition of B2B service provider Neutra Network.

The auction total surpassed the €100 million reserve price with ease and MasMovil and Telefonica were quick to note rivals had paid a greater sum for their allocations.

In a statement to Mobile World Live MasMovil said it had paid an average of €0.57 million per MHz, while the average in the auction was €2.2 million for the same amount.

Telefonica said it “applied criteria of rationality in the auction that has allowed it to obtain the desired spectrum by paying the lowest price per MHz of all the bidders in it.”

All licences are valid for 20 years.