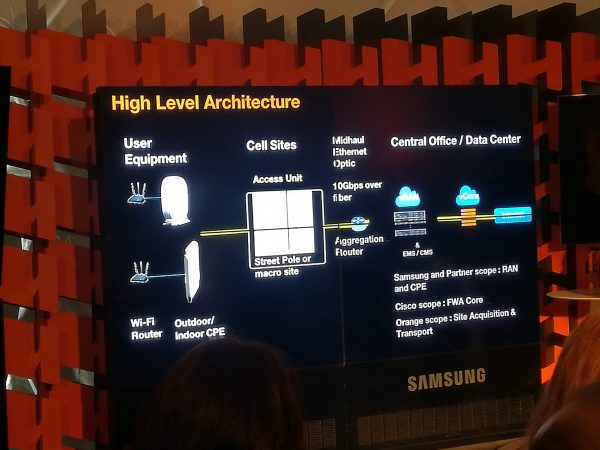 According to The Mobile Network Magazine:

Orange has been trialling 5G Fixed Wireless Access (FWA), using the 5GTF specifications, with live customers in Romania. It is the first such trial in Europe, although other trials of the same radio access technology are much more advanced in the USA with Verizon, Sprint and AT&T.

Orange sees FWA as a likely use case for 5G in markets where fibre and fixed broadband availability is constrained. It said that in Romania it could see potential for up to 10% of the overall broadband customer base to have a FWA connection

In Floresti, Orange has two Samsung Fixed Wireless Access points operating over 500MHz of experimental 26GHz spectrum. The access points have 128 element MIMO antennas. Orange has one access point on a tower on top of a hill and one on a lower, 20m, tower. The trial runs from the start of June to mid July.

About 30km away in an Orange data centre the operator has sited vBBU capacity from Samsung on COTS server hardware, and a dedicated Virtual Core from Cisco. Arnaud Vamparys,  Orange Senior VP Radio Networks, said the operator would not necessarily deploy vRAN to support FWA deployments, but that it was important to do so in this instance to explore the potential flexibility and efficiency benefits that such an architecture could support. “We are not saying that FWA will be on virtual radio, but we are doing it in the beginning because it is important to understand the choice.” The operator had deployed a high layer split between the access point and vBBU, he added.

More details are available in TMN mag. Below is the official video about the FWA testing.