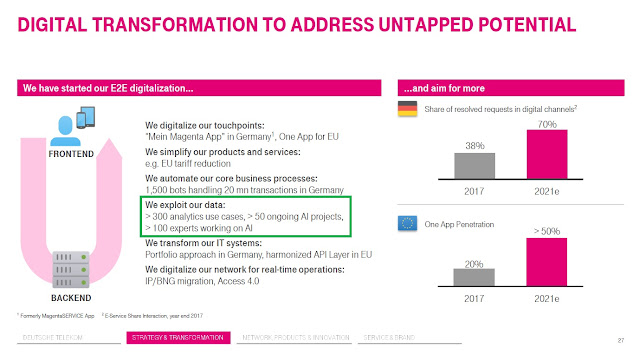 Earlier we wrote about Telefónica Deutschland working with Big Data & AI, so today we are looking at another German operator working with Artificial Intelligence and Analytics.

From a news item on their website last year:

Instead of buying "off-the-shelf" AI systems and robots, which can be expensive, Deutsche Telekom is developing its own AI solutions – via its developer teams, and with the support of partners. And it is testing AI-based software, computers, voice control functions and chatbots, with a view to making customer service more efficient, for consumers and corporate customers alike.

Standard queries from corporate customers can easily call for a thousand manual actions in various software systems – actions such as entering bookings and process commands, and initiating orders. By developing its own smart software for such tasks, the company can thus save considerable time and expense – and nerves!

Chatbots can make customer service more effective and efficient. They can handle routine tasks, and they can be available around the clock. Deutsche Telekom has a range of different digital assistants, most of which are recognizable as such to customers. While they will not be able to replace real human service agents in addressing complex concerns, AI systems will increasingly be able to relieve human agents of standard tasks – and thus give human agents more time for the tasks that only they can do. With this perspective, AI systems are being designed to be able to solve specific customer problems. Virtual assistants such as Tinka, Sophie and Vanda will soon be able to "learn" from chat logs and from real conversations between service agents and customers. They will be able to glean the best solutions and approaches, to remember what they have learned and to apply a growing fund of knowledge. They are also being designed to communicate with customers in ways that sound and feel "human." Significantly, in the interest of coordinating its efforts in this area, Deutsche Telekom has launched an overarching AI program, eLIZA, for the purpose of linking all AI solutions within the Deutsche Telekom Group. 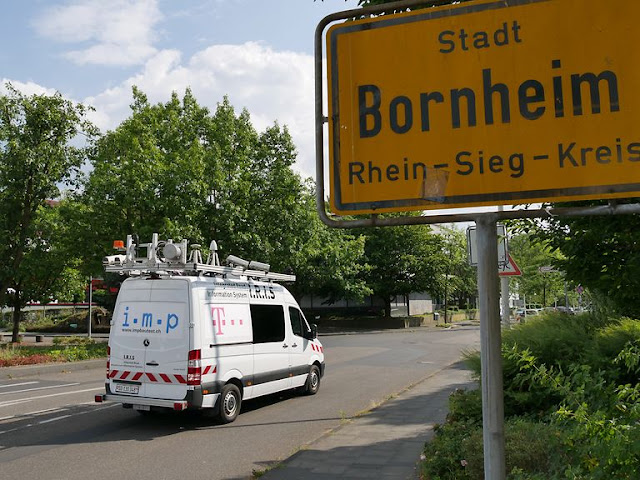 In the recent news, Deutsche Telekom announced that it has been using artificial intelligence for fiber-optic roll-out:

Deutsche Telekom is breaking new ground in its fiber-optic roll-out: It has become the first network operator in Europe to plan a pilot project using artificial intelligence. Thanks to faster and optimized route planning, the roll-out can cover more ground, faster. And customers will feel the benefits.

"The shortest route to the customer is not always the most economical. By using artificial intelligence in the planning phase we can speed up our fiber-optic roll-out. This enables us to offer our customers broadband lines faster and, above all, more efficiently," says Walter Goldenits, head of Technology at Telekom Deutschland. It is often more economical to lay a few extra feet of cable. That is what the new software-based technology evaluates using digitally-collected environmental data. Where would cobblestones have to be dug up and laid again? Where is there a risk of damaging tree roots?

A measuring vehicle was sent out in Bornheim (near Bonn) this summer, equipped with 360° cameras and laser scanners as part of Deutsche Telekom's FTTH (Fiber-to-the-home) project. It collected detailed environmental data using GPS technology. Depending on the terrain, the vehicle can cover 50 to 80 kilometres per day. All told, it collects approximately 5 GB of surface data per kilometer.

The effort and thus costs involved in laying cable depend on the existing structure. First, civil engineers open the ground and lay the conduits and fiber-optic cables. Then they have to restore the surface to its previous condition. Of course, the process takes longer with large paving stones than with dirt roads.
...
The neural network used for this recognizes a total of approximately 30 different categories through deep learning algorithms. This includes trees, street lights, asphalt and cobblestones. Right down to the smallest detail: Do the pavements feature large pavement slabs or small cobblestones? Are the trees deciduous or coniferous? The trees' root structure also has a decisive impact on civil engineering decisions.

Once the data has been collected, a specially-trained artificial intelligence is used to make all vehicles and individuals unidentifiable. The automated preparation phase then follows in a number of stages. The existing infrastructure is assessed to determine the optimal route. A Deutsche Telekom planner then double-checks and approves it.

Telefónica Deutschland leveraging DT's high-performance fiber-optic cable network to connect at least 5,000 mobile base stations to support 3G and LTE networks and prepare for 5G. According to Broadband World News it was unclear whether its AI use will apply to the work slated for Telefónica Deutschland.