Telefónica's AI based assistant, Aura, is serving more than 1.5 million customers per month in Brazil 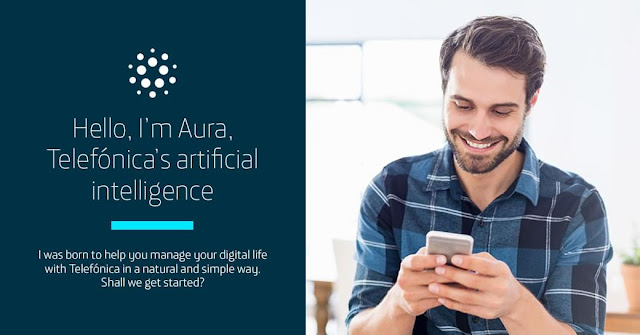 In an earlier post, I talked about Telefónica's launch of Aura at MWC 2018. Aura is an artificial intelligence-powered digital assistant that is designed to transform the way customers interact with Telefónica and manage their digital life with the company. They first release of Aura was made available in Argentina, Brazil, Chile, Germany, Spain and the United Kingdom.  Aura is available on customer devices via a mobile application and also via other third-party channels including Facebook, Google and Microsoft.

Anyone interested in details of Aura can check out the official page here.

In a recent news by Vivo (brand of Telefónica) Brazil, Aura is already serving more than 1.5 million customers per month. Accroding to the press release (translated via Google translate):

About to complete its first year of life, Aura, artificial intelligence of Vivo, already serves more than 1.5 million customers per month, responding in a personalized way on services, data consumption, account, recharge, among other questions of the subscribers. And since its launch in February 2018, Aura has already made approximately 20 million calls.

The Aura retention rate is higher than 80%, that is, eight out of 10 customers are satisfied with the response given by Aura and do not need other information. Aura is available in different service channels, among them Facebook Messenger, My Vivo Mobile, Meu Vivo Fixo and Meu Vivo Empresas, and the Vivo site, among others.

Since the end of 2018, Aura also serves the call center - hourly, in a pilot project in a DDD of the State of São Paulo. And, to further improve the quality of service provided by Aura, Vivo inaugurated its Bots Training Center last year. The new area looks at whether Aura correctly understands customer doubts and generates inputs to correct and train the bot, and assess whether Aura's response really clarifies the customer's question, thereby ensuring continuous improvement of the customer experience. users.

There is also an official YouTube video demonstrating Aura but it doesn't say much. There is an unofficial one that demonstrates how Aura works.


Just a matter of time before majority of customer services are handled by bots and AI assistants.
Posted by Zahid Ghadialy at 00:01