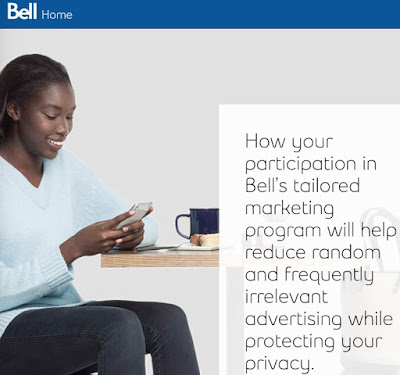 Bell Canada began asking its customers in December for permission to track everything they do with their home and mobile phones, internet, television, apps or any other services they get through Bell or its affiliates.

In return, Bell says it will provide advertising and promotions that are more "tailored" to their needs and preferences.

If given permission, Bell will collect information about its customers' age, gender, billing addresses, and the specific tablet, television or other devices used to access Bell services.

It will also collect the "number of messages sent and received, voice minutes, user data consumption and type of connectivity when downloading or streaming."

"I mean, in a perfect world, they would give you discounts or they would give you points or things that consumers would more tangibly want, rather than just the elimination of a pain point — which is what they're offering right now," Toronto-based consultant Charlie Wilton, whose firm has advised Bell and Rogers in the past, says.

Teresa Scassa, who teaches law at the University of Ottawa and holds the Canada Research Chair in Information Law and Policy, says Bell has done a good job of explaining what it wants to do but there are also privacy and security concerns to consider.

At the macro level, Bell's data security could be breached by hackers. At the micro level, she adds, there's the potential for family friction if everybody starts getting ads based on one person's activities.

Ads for pornography, birth control or services for victims of abuse could trigger confrontations, for instance.

"Some families are open and sharing. Others are fraught with tension and violence," Scassa says.

Wilton says a company in Bell's position also runs the risk that customers will feel betrayed if their information is leaked or the advertising they receive is inappropriate.

Back in Oct. 2013, CBC reported another similar news item on Bell about Privacy commissioner to start investigating Bell's data collection as Canadian telecom giant was about to begin highly targeted advertising program in Nov. What Bell said back then:

"What's new is that we're giving Bell customers the option to receive internet advertising that's relevant to them rather than the random online advertising they're receiving now. The number of ads customers see won't increase and they can opt out anytime by visiting bell.ca/relevant ads. We're giving customers advance notice before we start offering relevant advertising on Nov. 16."

iPhoneInCanada has more details on this topic.

The Relevant Ads Program was eventually phased out in 2015 after the Privacy Commissioner of Canada ruled the advertising violated Canadian law, as it automatically opted-in customers.

Now, Bell’s current version of this ad tracking program recently asked customers last month to gain more access to personal information for improved “tailored marketing.” This data would arise from a Bell’s customers wireless or landline, internet, television, or anything related to Bell apps and the company’s affiliates.

The Canadian Press reports a notice sent out last month by Bell explained, “Tailored marketing means Bell will be able to customize advertising based on participant account information and service usage patterns, similar to the ways that companies like Google and others have been doing for some time.”

Bell says it wants to gain data such as a customer’s age, billing address, gender and specific devices used to access Bell services, on top of the “number of messages sent and received, voice minutes, user data consumption and type of connectivity when downloading or streaming,” for the sake of delivering more targeted ads. 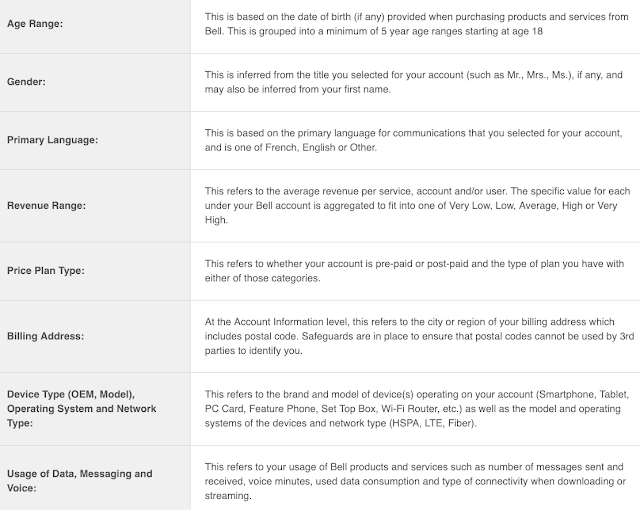 Both pictures above are from iPhoneInCanada. You can read more details about this story there.
Posted by Zahid Ghadialy at 07:54