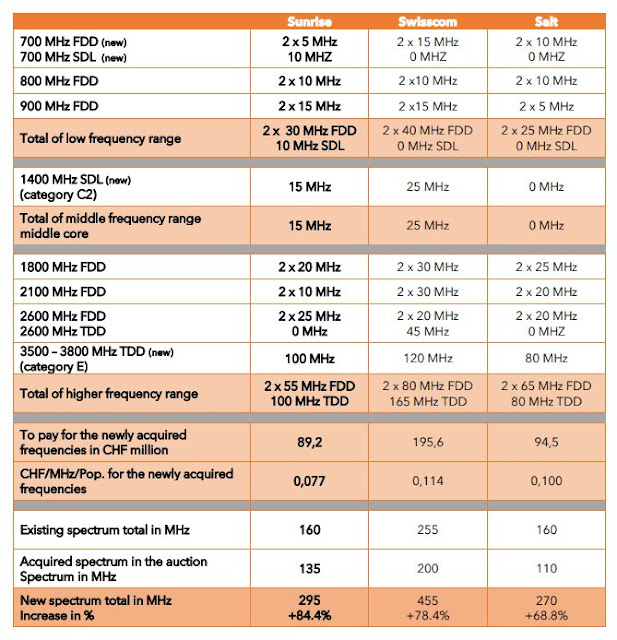 The frequencies will be assigned for 15 years, which the regulator said provides the “operators long-term planning security to develop their networks.”

Dense Air, a small cell player which launched in 2018, pulled out of the Swiss auction. Reuters noted this “removes a potential rival for the three companies in the already crowded Swiss mobile market”.

Swisscom, which paid CHF196 million, said by the end of 2019 it expects to roll-out 5G to 60 towns and communities.

Sunrise and Salt did not have such concrete plans. The former said the frequencies gained will help it to “deliver a world-class 5G network in the future” and the latter that it will “improve its high-quality mobile network” with “next-generation speed, latency and capacity”.

According to a media release by Sunrise:

At the 5G frequency auction, Sunrise has acquired the strategically most important frequencies in the 3.5 GHz band, which perfectly fit its "5G for People" strategy.

Thanks to a clever bidding strategy, Sunrise was able to acquire the most important bands at a favorable price of 0.077 CHF per MHz/Pop. With the frequencies acquired in the middle frequency range and combined with the existing frequencies, Sunrise will be able to provide the area coverage and capacities needed in the long term.


According to the chart on top (from Sunrise media release), you can see that all the three operators are well placed with a reasonable amount of coverage and capacity layer 5G spectrum. The 5G future looks good for Swiss.
Posted by Zahid Ghadialy at 08:05