Rakuten Japan: Transitioning from MVNO to MNO later in 2019

Rakuten is a Japanese giant with a turnover of over $139 billion last year. Along with all the other e-commerce and internet business, it is also an MVNO. 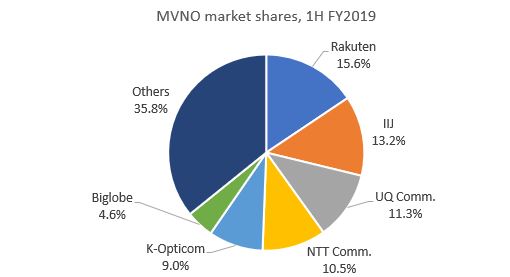 According to Smart Karma:

In the latest data, MVNOs (mobile virtual network operators) have reached 7.0% market share of Japan’s main 3G and LTE (4G) services with over 12m subscribers. Government support remains robust for the MVNOs. Mr. Suga, the Chief Cabinet Secretary, has suggested that MVNOs, in all forms, should expand to 50% of the market in the future.

As Rakuten prepares for its full MNO (mobile network operator) service launch later this year, the Rakuten MVNO services continues to execute well, taking market share and building a formidable foundation of subscribers. Rakuten is now Japan’s largest MVNO by customer numbers. We expect Rakuten will struggle to make a reasonable return on its MNO on a standalone basis, but it may strengthen the company’s overall ecosystem and create enough synergies to add positive value to the group.

Since 2014, consumers in Japan have enjoyed affordable mobile phone service through Rakuten Mobile. The service has grown to become Japan’s biggest MVNO (mobile virtual network operator), enjoying particular success attracting young people with its low fees and appealing loyalty point incentives. As an MVNO, however, Rakuten Mobile utilizes the infrastructure of other major network carriers to deliver its service – limiting its ability to launch technical innovation and provide new services to customers.

As the new mobile network will be required to provide coverage across the entire country, Rakuten has mobilized partners and its employee base to rapidly secure sites to build out the radio access network, as well as signing an agreement with KDDI Corporation to provide roaming services during its own infrastructure construction period. Nevertheless, there has been speculation about the ambitious schedule and budget Rakuten has proposed for rolling out its plans.

“How could you do this? It is not possible to build a network in only 12 months without a significant capex investment,” posed Amin during his presentation. “It is possible because we are deploying a very different architecture and leveraging Rakuten IT skills as a leading tech company.”
...

Rakuten has also been making headlines in Japan with its forays into 5G innovation, in partnership with firms such as Nokia, Altiostar, Cisco, Mavenir, Intel, Qualcomm, Quanta and NEC. According to Amin, deploying “true” 5G is an integral part of Rakuten’s mobile journey.

“What does 5G transformation for Rakuten really look like?” Amin asked the audience at the Conference. “If you look at any traditional operator, both inside and outside of Japan, it’s actually a very unnatural process to upgrade to 5G. They have to completely virtualize their infrastructure, they have to deploy new core architecture, they have to deploy new radio access. In Rakuten’s world, the entire core technology, including our Radio Access Network, is fully ready for 5G.”

The fact that Rakuten, unlike existing telecommunication companies, has no outdated and legacy infrastructure to maintain is a significant advantage. “We don’t have to worry about building and transforming our network from 3G or 4G to 5G. From day zero, Rakuten network is 5G ready.

At the same time, Amin doesn’t consider the 5G services that other telcos are launching to be “true” 5G. “If you truly want to offer functionalities and capabilities like network slicing into this new architecture, you must deploy standalone 5G core, which Rakuten is doing.”

As if a brand new cloud-native 5G-ready network wasn’t sufficiently exciting on its own, there’s another key angle to the Rakuten story. What makes it different is that the company has a strong services and applications heritage (over 70 services to date, in use by over 100 million registered members). This is not a mobile network operator that will then create and launch applications – this is an established services and apps company that is launching a mobile network. It’s an important distinction, and one which could – if successful – lead to other similar new entrants and business models in the decade ahead.
...

The RAN will initially be 4G and Wi-Fi, with the addition of 5G planned for early 2020, subject to government licensing approval. As well as consumer mobile, Rakuten also plans to offer 5G FWA and NB-IoT. 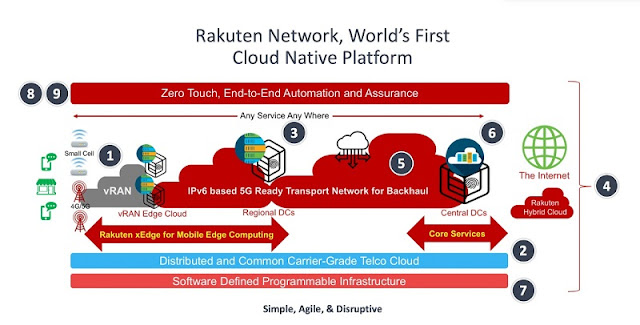 The Mobile Network has a lot of insights on the Rakuten Network here and here.

Finally, I caught up with my ex-colleague and a big supporter of 3G4G blogs, Rahul Atri at the Rakuten booth. I had to add his picture here 😉 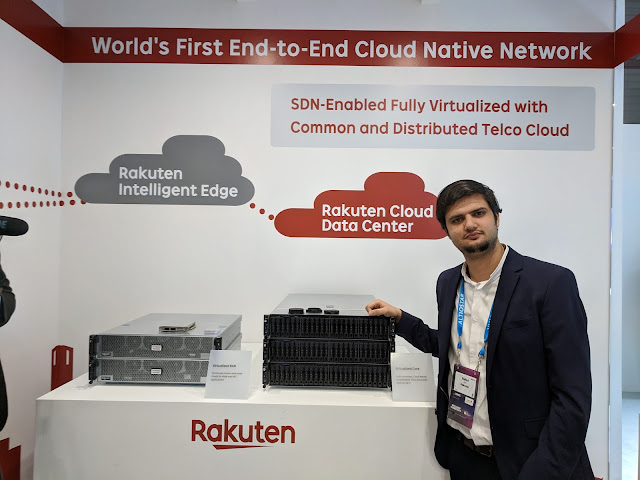 Related reading on this topic: