Before proceeding further, if you are not aware of different 5G Network Architecture Options (including EN-DC), you may want to check out our tutorial on 3G4G page here. 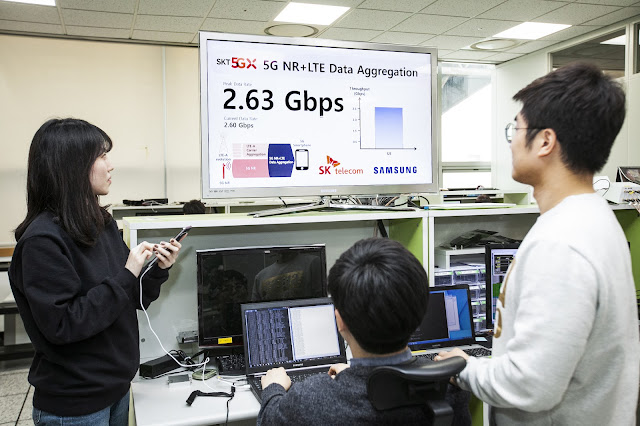 According to the Samsung press release:

During the test, both companies have successfully achieved 2.65Gbps in data speeds on the 5G smartphone, combining both 1.5Gbps in 5G using 3.5GHz frequency (100MHz bandwidth) with 1.15Gbps in LTE using 1.8GHz, 2.1GHz, and 2.6GHz frequencies (65MHz bandwidth) all of which are for commercial use by SK Telecom.

The test, carried out at Samsung Electronics located in Suwon, Korea, used Samsung’s commercial 4G and 5G NR end-to-end networks solutions which have been provided to the operator’s current service. In addition, companies used Samsung’s virtual core (vCore) that supports simultaneous 4G and 5G as well as its Galaxy S10 5G, Samsung’s first 5G smartphone which was unveiled last month.

SK Telecom, in particular, will be able to boost the overall transmission data speed by 80% by leveraging the 4G and 5G dual connectivity. It will allow users who are staying in the 5G service coverage to download UHD videos of 2GB in just 6 seconds, and large video content such as 4K VR video of 10GB in less than 30 seconds.

The two companies demonstrated the delivery of multi-gigabit speeds for 5G device, with a focus on seamless user experiences. Wherever mobile service subscribers are without being limited to 4G or 5G service areas, they can expect seamless, consistent, and stable mobile services. In the early stages of 5G era, the combined capabilities of 4G and 5G networks are important forces for mobile carriers to maximize the characteristics of the 5G network – ultra-fast speed, low-latency, and massive-connectivity by leveraging widely deployed 4G network coverage.

The success of the demonstration by SK Telecom and Samsung signifies a blueprint of early 5G deployment, spotlighting a rapid, stable and effective path to 5G service using a dual 4G and 5G approach.

This success is part of an ongoing collaboration between SK Telecom and Samsung of many years. Pushing forward early 5G commercialization, the companies have succeeded in the world’s first 4G and 5G interworking back in 2017 and world’s first 5G Next-Generation Core (5G NC) trial in June 2018, which featured control and user planes separation and VNFs implementation based on 3GPP release 15 standard. These joint forces have led Samsung to become a major partner for SK Telecom to successfully launch 5G mobility commercial service in Korea, December 1st 2018.