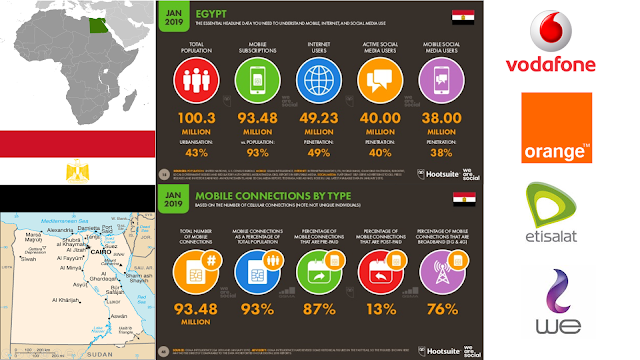 Egypt has one of the largest mobile telecom markets in Africa, with effective competition and a penetration rate of about 94%. Although the country was among the first countries in the region to launch 3G mobile services, the development of LTE services was delayed by the late issuing of licenses. Telecom Egypt (operating under the brand WE) in August 2016 received the country’s first unified services licence, which allowed it to offer LTE services, while the remaining three MNOs (Orange Egypt, Vodafone Egypt and Etisalat Misr) followed after having disputed the terms associated with the LTE licences offered. Commercial LTE services were launched in late 2017 under unified licences which also enabled the three network operators to offer fixed-line services using the infrastructure of Telecom Egypt. It has been speculated the National Telecommunications Regulatory Authority (NTRA) will start selling 5G spectra to Egypt’s four mobile network operators in 2020.

The three first providers have a similar footprint and 2G and 3G in the populated areas. Orange, once called Mobinil used to be market leader, but lost this position in recent years to Vodafone. Etisalat is the newest arrival, but almost on par in coverage now. So speed and coverage depend heavily on your local position to the closest antenna. 2G is on 900 MHz (and 1800 Mhz on Etisalat only), 3G up to HSPA+ speed on 2100 MHz.

In 2016 landline operator Telecom Egypt became the first operator to acquire a 4G/LTE concession. They've launched in September 2017 offering 2G, 3G and 4G services via Orange Egypt with whom they inked a roaming deal in 2017 for the next years. The other providers also received licenses for 4G/LTE.

According to OpenSignal report of March 2019 4G/LTE availability is around 60% through all networks with Vodafone topping the list at 67%. Download 4G speed is on average 8-9 Mbit/s with Orange topping at 10 Mbit/s.

Vodafone Egypt, half owned by Telecom Egypt, has become the biggest provider in Egypt with a 44% share of the market. It overtook Mobinil (now branded Orange) in 2011 and offers a good coverage at pretty high rates. For 4G/LTE Vodafone started in 2017 on 1800 MHz (B3) in major towns and resorts.

Vodafone has in recent years sold out of or merged with rivals in a number of countries, including India and New Zealand, to focus on expanding its European footprint.  Vodafone Egypt is the largest telecoms operator in Egypt by market share and the British telecoms company was the country’s largest foreign investor.

Egypt has been a growth engine for Vodafone in the past but they were criticised by activist groups during the Arab Spring in 2011 after their network was used to send text messages telling Egyptians to “confront the traitors and criminals” on behalf of the government, before it was turned off. The company later defended its actions saying that three of its engineers were being held hostage and that it had no choice but to comply with the law.

Orange were the biggest mobile provider in Egypt back in the days when it was still called Mobinil. In 2016 they were rebranded to the Orange label. They compete with Vodafone and Etisalat and are at no.2 position with 33% of customers They offer a good coverage in the country and 4G/LTE has started in 2017 on 1800 MHz (B3) in major towns and resorts.


It has been announced Orange Egypt will build and operate a data center and cloud computing platform for New Cairo, Egypt’s next capital city. The Administrative Capital for Urban Development (ACUD) is a state-backed company contracting the telco's regional subsidiary. Daily News Egypt reported on the signing of the contract between Orange and ACUD on January 12 2020.

According to the deal, Orange Egypt will provide the main infrastructure to help the city provide various services in conjunction with IoT solutions, cloud computing, and artificial intelligence.

Etisalat is the smallest of the three providers with a market share of 22%. It gives good coverage in some places, but has gaps and slow speeds in others. They combine their own hotspots in their products. Etisalat is said to have the lowest coverage, but are the only provider that publish+es a 2G/3G coverage map. 4G/LTE was launched in 2017 on 1800 MHz (B3) in major towns and resorts.

Etisalat Misr has teamed up with Honeywell  to support Egypt’s smart city vision and deliver world-class services for citizens at Egypt’s New Administrative Capital, which is one of the world’s largest smart city projects.

Telecom Egypt (its brand name WE) is the state-owned landline monopolist with more than 6 million customers. In 2016 it acquired a LTE license and the network has been started in autumn 2017. They provide 4G/LTE at first "experiminentally" on Bands 1 and 8 (900, 2100 MHz). 2G and 3G coverage is done through roaming agreements with Orange and Etisalat.

Telecom Egypt also has a 45% stake in Vodafone Egypt which they have stated they have no intention of selling.
Posted by Zaffareen Khan at 06:35