Iceland getting ready for the year of 5G 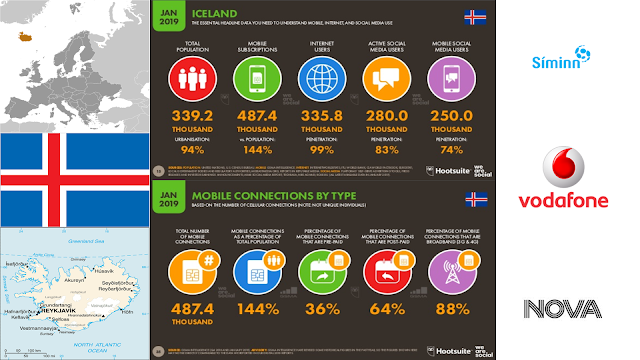 Iceland has one of the smallest yet most progressive telecom markets in Europe. There is effective competition in the mobile and broadband markets, with a number of players having emerged to challenge the dominance of the two leading players the two main players Siminn and Vodafone, which have interests in numerous sectors.

The new entrant Nova has become the leading player in the mobile market and has quickly expanded its presence in the fixed-line segment.

The island has a very good coverage on 2G and 3G given its topography and low population. Síminn is the market leader with the best coverage, followed by Vodafone (still good) and Nova in 3rd place (mainly in the southwest).

So Síminn is the costliest, but best for going to remote areas, Vodafone is cheaper and still sufficient if you stick mainly to populated areas and Nova the cheapest and good when you stay mostly in the population center around Reykjavik.

Síminn (aka Landssíminn) is the old state telco which still has the best coverage and speeds throughout the country and is market leader in Iceland at slightly higher rates. LTE coverage is at 98% of population in 2017 on band 3 /1800 MHz only.

As part of its 5G preparations, Síminn will modernise and expand its radio network and continue to deploy the 5G-ready Ericsson Radio System.

In addition to the radio network, Síminn has also chosen Ericsson to modernise its core network including Ericsson Cloud Packet Core portfolio upgrades to support the transition from 4G to 5G.

Vodafone is the biggest competitor of Síminn in Iceland. Its coverage is still good, even at some place better than Síminn, and it gives out a voice & data SIM and a data-only SIM for a better start-up price and cheaper rates. 4G/LTE is available on 1800 Mhz (band 3) and 800 Mhz (band 20):

Nova is the smallest provider and still reasonable, if you stick mainly the population center around Reykjavik, where it offers 4G/LTE too. It's very popular amongst exchange students flocking the country, because it gives out 1000 minutes of free calls and 500 free SMS per month amongst Nova customers. 4G/LTE is given out where available on LTE bands 3 (1800 MHz) and 20 (800 MHz).

Nova was the first mobile operator to launch both 3G and 4G on Iceland. They now follow their tradition by also being the first to fully test 5G locally. Huawei has been chosen to be the partner and supplier of equipment needed and the trials are expected to last several months. Nova expect 5G to be widely adopted in Iceland in 2020.

For the test Huawei have installed 5G base stations and routers placed at Nova’s facilities. Now, careful tests will commence for aspects such as quality of transmission and network security. Huawei now have over 30 commercial 5G contracts with telecommunications companies worldwide, mainly from Europe including Finland, Spain and UK.

The Memorandum of Understanding signed state that Nova and Huawei intend to strengthen and expand their strategic partnership. Both parties intend to extend cooperation on 5G technology to realize the best telecommunications network in Iceland in terms of radio coverage, stability and bandwidth which ensure the reliable service quality and the enhanced experience for Nova customers.
Posted by Zaffareen Khan at 07:35