The Afghan telecommunications market and infrastructure has suffered from extensive damage due to conflict as well as lack of investment and neglect. However, in the years following the U.S.-led invasion, the telecommunications sector has emerged as a leading component of the country’s economy.

There exist four main mobile operators in the country, Afghan Wireless Communications Company (AWCC) was re-launched in 2002 (incorrectly named as Airtel Afghanistan in table below) and a second mobile operator, Roshan, began offering services the following year. AWCC and Roshan were awarded duopoly exclusivity over the market for three years from 2003 to 2006. A third operator, Areeba, entered the market in 2006 and was subsequently renamed MTN Afghanistan after being acquired by the South African mobile group MTN in 2007. A fourth mobile operator, Etisalat, entered the market in 2007. As of 2014, Roshan had a one-third market share, MTN had a one-fourth market share, and AWCC and Etisalat each had shares of approximately one-fifth. 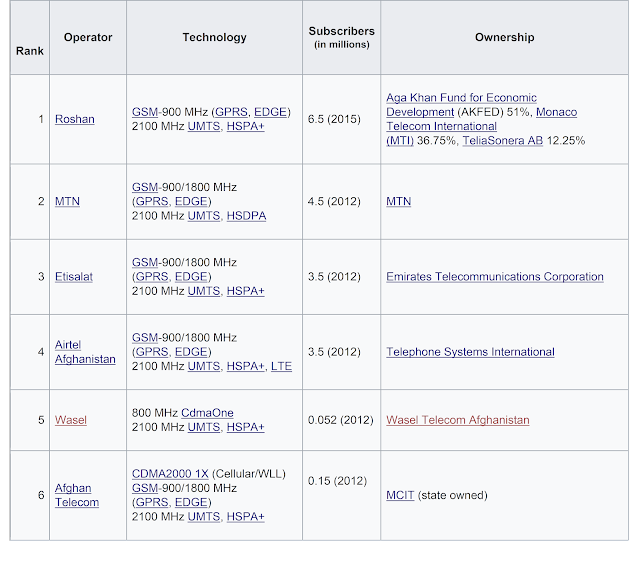 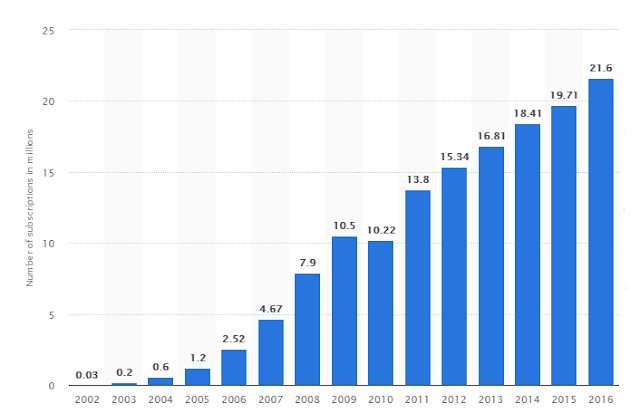 "In Afghanistan, in 2002, there was no infrastructure. We almost started from a zero base, with 20,000 fixed lines in Kabul city and some major cities. But now, we have 80% mobile penetration and 3 million people out of the 30 million population are using the Internet. "

The mobile sector has been boosted by the absence of effective fixed-line alternatives. 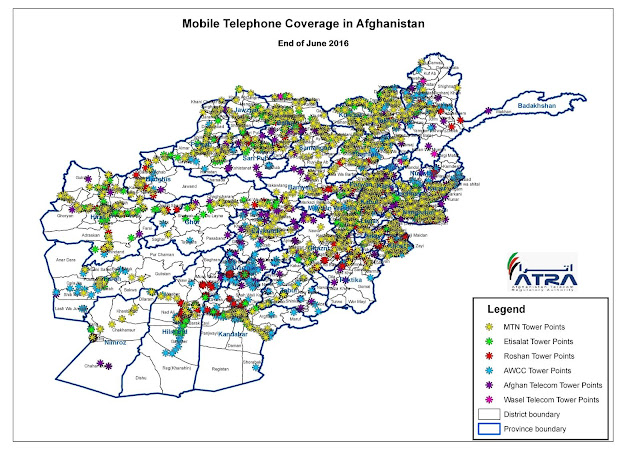 The operator with the largest number of subscribers Roshan is an Afghanistan success story, serving as a catalyst for economic growth and actively contributing to the country’s long-term development. Since its inception in 2003, Roshan has invested approximately $700 million in Afghanistan and is the country’s single largest investor and taxpayer, contributing approximately five percent of the Afghan government's overall domestic revenue. Roshan directly employs more than 700 people, 20 percent of whom are women, and provides indirect employment to more than 35,000 people. The company announced their 4G network would be launched imminently in May 2017. No further information can be found as yet.

Roshan is deeply committed to Afghanistan’s reconstruction and development. The Aga Khan Fund for Economic Development (AKFED), part of the Aga Khan Development Network (AKDN), is a major shareholder of Roshan and promotes private initiatives and building economically sound enterprises in the developing world. Also owned in part by Monaco Telecom International (MTI) and Telia, Roshan brings international expertise to the country and is committed to the highest standards of network quality and coverage for the people of Afghanistan.


Meanwhile in May 2017, Afghan Wireless launched the first 4G LTE service in Afghanistan. That service is now live in Kabul, and the company is extending 4G LTE to the entire country.

The company has invested more than $400,000,000 to build Afghanistan's largest, fastest and most reliable communications network. AWCC's network provides its 4G/LTE, 3G and 2G subscribers with data access capacity of at least 400 Mega Bytes per second—the fastest and best speed available in Afghanistan.


"We at Afghan Wireless are proud to be the first mobile communications company to provide 4G/LTE service to the people of Afghanistan,The launch of AWCC's 4G/LTE Network in Kabul—and soon, throughout the nation—is the latest example of AWCC's determination to provide Afghans with the world's best communications services.  Afghan Wireless is a company built by Afghans. And we're honored to serve Afghans, and support our country's technological development, economic and social progress."

Some interesting Tweet-observations about Afghanistan:

Met @Javidfaisal, a senior spokesperson in the Afghan government.

Interestingly I found that the active social media presence of the youthful popluation in Afghanistan is very similar to Iran.


Any chance he could explain why I could get a better 3G / 4G mobile signal in the mountains of Afghanistan than in and around Old Trafford?
— Stuart Burkhill 🐝 (@stuartburkhill7) March 12, 2018