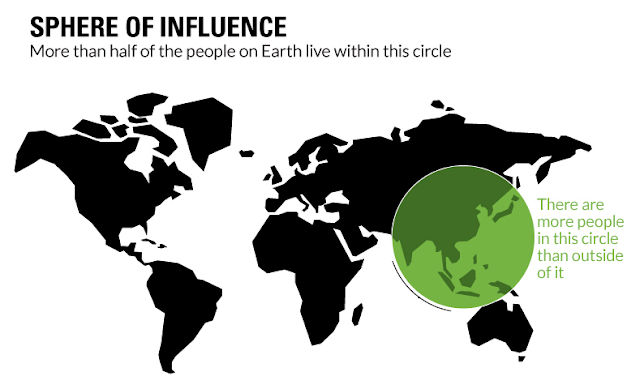 You have probably seen the map above. It shows there are more people in this circle than outside. Its also where many huge telecom operators are located. Well, Asia-Pacific or APAC is much bigger than what you see above. See this pic below. 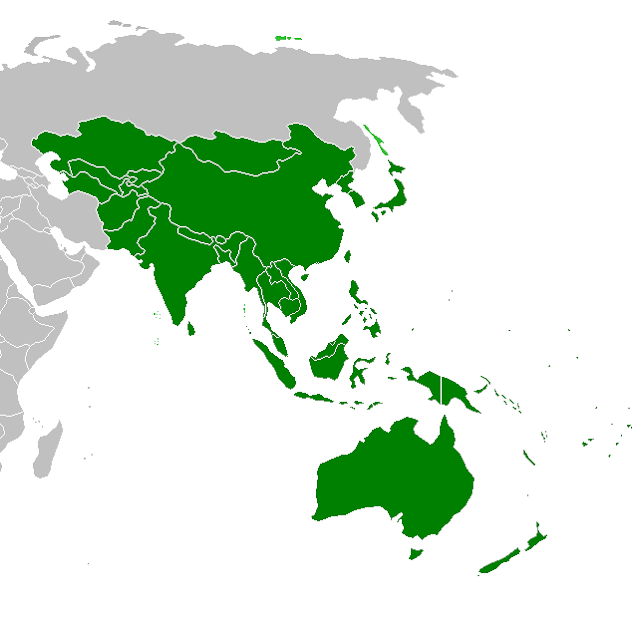 Total Telecom just published a list of 32 top operators in this region by revenue. Here is the list. 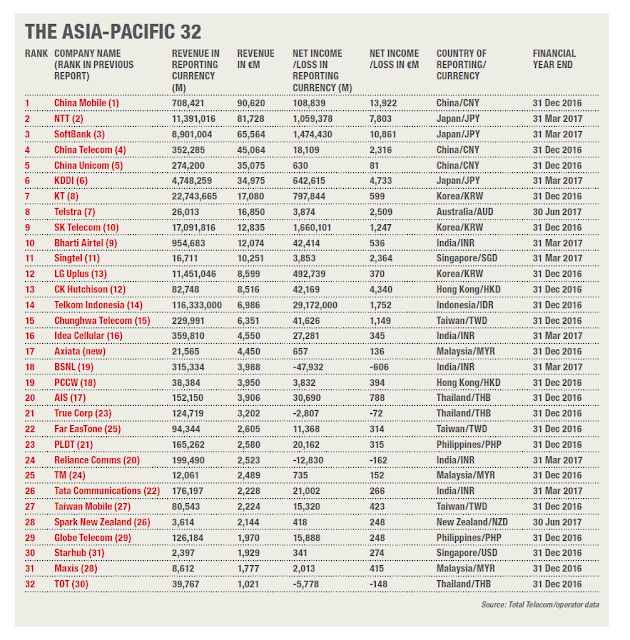 Mobile In Tokyo makes a good point (tweet below) that even though Japan is roughly 1/10th of China by population, the 3 Japanese operators generate 37% of revenue in Asia.

According to this report, three Japan telcos generate 37% of revenues in Asia, just ahead of China - considering 1/10 compared population = 10x ARPU. See 'on the Road to 5G' via @totaltelecom https://t.co/S0CMSfDlPb
— Mobile in Tokyo (@Wireless_Watch) June 26, 2018


In other interesting analysis in the article:

India contributes the most operators to the Asia 32 table with five representatives, but its revenue share is just over 5%, down slightly on the previous report. As detailed in the full Global 100 report, India's telcos are experiencing more than their fair share of difficulties, with Reliance Communications and Tata Communications both pulling out of retail telecoms on the back of fierce competition from newcomer Reliance Jio Infocomm. Jio will also be a newcomer to the Global 100 in the next report. It generated revenues of 239.16 billion rupees in the year to the end of March 2018, which equates to around €3 billion and would afford it 22nd place in the current Asia-Pacific ranking and 65th in the full Global 100.

There was a newcomer to the current Asia 32 table in the form of Malaysia-based Axiata, which ranks 17th in the Asia-Pacific and 51st in the overall Global 100. There were previously just 31 representatives of the Asia-Pacific region in the Global 100.

The region's overall revenue total came in around €1 billion higher than in the previous ranking, with the Asia 32 together generating €502.3 billion. The Asia-Pacific accounted for 36% of total Global 100 revenues, down from 38% two years earlier.

You can read the complete article here.

In related news, according to Telecom TV:

Asia Pacific is on track to become the world’s largest 5G region by 2025, led by pioneering 5G markets such as Australia, China, Japan and South Korea, according to the latest edition of the GSMA’s Mobile Economy report. Launches of commercial 5G networks in these markets beginning next year will see the Asia region reach 675 million 5G connections by 2025, more than half of the global 5G total expected by that point. Asia’s move to state-of-the-art mobile broadband networks reflects the mobile ecosystem’s growing value to the region’s economy. According to the report, Asia’s mobile industry added $1.5 trillion in economic value last year, equivalent to 5.4 per cent of regional GDP.