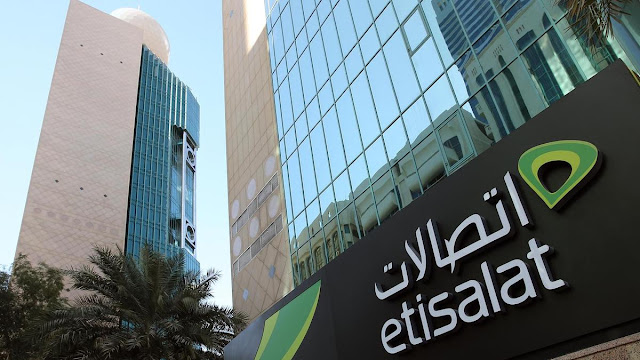 Etisalat is a multinational Emirati based telecommunications services provider, with 143 million subscribers operating in 16 countries across Asia, the Middle East and Africa. Etisalat’s current market cap is over AED 156 billion (42.5 billion USD). With reported net revenues of AED 52.4 billion and net profit of AED 8.4 billion for 2016, Etisalat ranks amongst the most profitable telecom groups in the world.

Etisalat became one of the world’s fastest growing telecom operators; with customer numbers growing from 4 million to over 140 million in less than 10 years. Its international acquisition programme began in earnest in 2004 through the award of the second mobile license, and the first 3G license in Saudi Arabia. Since then the company has witnessed rapid expansion, across the Middle East, Africa and Asia through acquisitions and organic growth. Etisalat now has access to a population of close to 700 million people, with Thuraya; its satellite network provider covering over two thirds of the planet’s surface.
Etisalat’s focuses on delivering innovative solutions to transform the communities in which it operates and fast track social development and economic growth. The telco is committed to actively develop and engineer platforms for growth within the local markets in which it operates through the deployment of advanced technologies, quality networks and customer focused services.

Etisalat launched 4G mobile services in the UAE and Saudi Arabia, and presently operates the Middle East’s largest LTE network with population coverage exceeding 82 per cent. Etisalat offers both the Middle East’s fastest fixed line broadband service with speeds of up to 500Mbps - the highest mobile broadband connectivity speeds to date. It has also launched several 3G networks in its footprint including Egypt Afghanistan; Ivory Coast and Benin. These advancements have helped Etisalat capture market share with the introduction of mobile broadband services and affordable internet access.


In May 2018 Etisalat announced the launch of the first commercial 5G wireless network in the UAE becoming the first telecom operator in the Middle East and North Africa (MENA) region to achieve this technological milestone and set an industry benchmark.

"Today's announcement is a historic moment for the company as the commercial launch of the 5G network will set a milestone for the UAE. Etisalat today is the first telecom operator in the world to provide this ultra-high 5G C-band data speed as a commercial service over the wireless network.
5G stands out as a game changer with rich potential, an evolution that would elevate services, performance, and enablement. It is the natural progression as part of our network modernization journey, the anticipated technical specifications are promising, bringing along various desirable features and functionalities."

The aim to have a fully developed commercial 5G network available to provide gigabit internet services to its customers. The network will fuel enterprises digital transformation, IoT, smart cities and the fourth industrial revolution.

Etisalat is also set to launch 5G devices by first-half of 2019.

This year at Gitex, Etisalat also has a special exhibition on the future of mobility, which is the best use case for 5G. The arrival of 5G technology will allow faster data transmissions and will prove to be game changing for the autonomous industry.

A download speed comparison between 4G and 5G live networks was showcased live giving visitors a chance to experience the "download time" difference between the two technologies by downloading a 4K HD movie/video using 4G and 5G e 5G use case that will focus on ultra-high speed and low latency. The exhibit will highlight the comparison of time to download a 4K video using 4G and 5G technology. The video(more than 1GB) download time is taken only 13 seconds as opposed to 4G, which takes approximately 2 minutes.

"This year our participation at Gitex Technology week is significant as visitors can experience live 5G giving them a preview of the digital future. Etisalat has also taken the lead in 5G this year and this showcase is a testimony to our long-standing efforts in bringing growth and innovation in the country laying the foundation for smart city development.
"The showcase is also in line with our main theme at Gitex this year 'Leading the 5G Revolution' and 'Driving the Digital Future to empower societies'. We believe 5G technologies and services will deliver capacity and connectivity along with opportunities for economic growth, education, healthcare, transportation and more."

Also on exhibited by Etisalat at Gitex is Pop.UpNext's Future Mobility Concept, an unmanned flying electric vehicle that is jointly developed by Audi, Airbus, and ItalDesign. Pop.Up Next's philosophy behind the design anticipates the challenges that the next 50 years will bring. It represents a vision of the potential offered by future technologies when it comes to transportation.

The concept aims to tackle issues linked to city planning and traffic in large urban centres that are increasingly becoming one of the priority aspects for safeguarding our planet. The Pop.Up Next system aims to free commuters from the need to drive through a flexible, shared and adaptable new way of moving within cities.

The vehicle combines the flexibility of a small two-seater ground vehicle with the freedom and speed of a vertical take-off and landing (VTOL) air vehicle, thus bridging the automotive and aerospace domains.

The car itself is a self-driving, electric vehicle, it is the first fully electric and zero-emission modular system bringing together road mobility and air transport. It combines the flexibility of a small two seater ground vehicle with the freedom and speed of a vertical take-off and landing (VTOL) air vehicle, thus bridging the automotive and aerospace domains. It can accelerate to 60mph in 9.7 seconds with a top speed exceeding 130kmph. The car features a curved 5K widescreen display that comes with voice and gesture control. The interactive display system, made by Harman, lets you do everything from watching movies to alerting you of upcoming obstacles, and even telling you when the light will turn green, through a vehicle-to-infrastructure communication system. The car also comes with a heads-up display to provide guidance when making turns when a driver is behind the wheel.

With IoT gaining popularity and the use of cyber-physical systems and advanced analytics to transform all aspects of the industry, Etisalat has also displayed tactile internet use cases where the robotic system is controlled remotely using the 5G technology. Tactile internet enables humans and machines to interact with their environment, in real time, while on the move and within a certain spatial communication range as well as enables haptic interaction with visual feedback.
These 5G powered tactile production systems showcased for the first time support increasingly flexible production lines and safer working environments that will allow industry to enhance productivity, and respond to customer needs, as they continue on their digital transformation journey.
Posted by Zaffareen Khan at 09:00