AT&T: Winning the Connected Car market in the USA 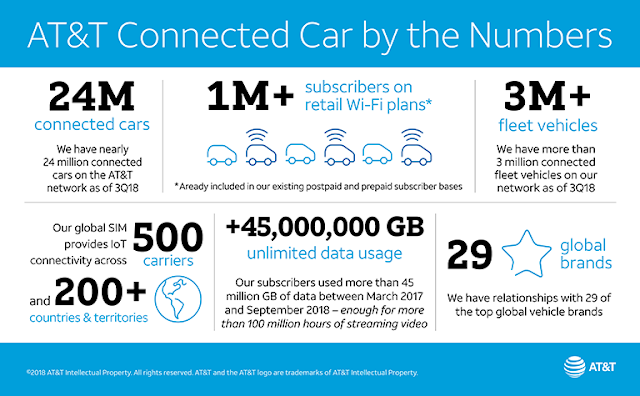 AT&T has trumpeted their connected car achievements in a recent news article on their website. Their main achievements:


According to Fierce Wireless:

A number of those automotive companies physically install an AT&T LTE modem into their cars, thus giving customers an option to pay AT&T $20 per month (or $10 per month for existing customers) in order to create a bubble of Wi-Fi connectivity using AT&T’s LTE network for backhaul. (AT&T said it may slow network speeds for customers who use more than 22 GB per month.)

For those motorists who don’t have a car equipped with an AT&T modem, the company recently introduced the Harman “Spark” device that plugs into the on-board diagnostics port (OBD II) in most vehicles built after 1996 and provides Wi-Fi connections alongside vehicle diagnostics and security. (AT&T’s Spark arrived on the market years after Verizon launched its similar Hum device and T-Mobile began selling its SyncUp Drive device.)

In addition to the above achievements, AT&T are very active in V2X standardisation and implementation. Here is what they say:

We’re serving in leadership positions across the industry, joining with other tech leaders to resolve key standards issues. This includes 5GAA, a cross-industry association between the cellular and automotive industries, the Automotive Edge Computing Consortium  of automotive, information technology, telecommunications, and cloud computing sectors, and the Auto-ISAC for automotive cybersecurity information sharing.

We expect vehicle-to-anything (V2X) connectivity technologies will help driverless vehicles to make virtually real-time decisions based on information that goes beyond the individual sensors onboard the vehicle itself.

Vehicles will be able to “see” around corners, in front and behind other vehicles – and at greater distances. This will eventually allow vehicles to quickly make sense of their surrounding environment as well as road ahead to help guide safe and efficient operations on the road.

For self-driving cars to interoperate with their environment and surrounding areas, it will be critical to have connectivity between vehicles, roadside units, pedestrians, and other infrastructure elements while navigating the roadways. Data analysis and decision capabilities will be largely processed onboard the vehicle utilizing various data sources from the vehicles and the surrounding intelligent transportation system.

But one of the most exciting aspects of automated vehicles is their ability to learn from other vehicles’ driving experiences in ways that human drivers simply cannot. This is where our 5G network comes into play. 5G will eventually allow for the necessary distribution of processed data to meet and exceed the needs of the automated vehicle.

The algorithms that govern AV operation can be continually improved as automated vehicles encounter new driving situations. For those improvements to be made, data must be collected, analyzed, and synthesized into improved algorithms to then be distributed to other vehicles. 5G will ultimately help create faster and more efficient exchange of this data, allowing these automated vehicles to distribute and receive data and function even better.

5G multi-gigabit speeds, distributed edge networks, and low latency services can help these capabilities to become a reality in years to come.

And self-driving cars and 5G will ultimately usher new opportunities for in-vehicle entertainment and engagement when drivers have more time on their hands.
Posted by Zahid Ghadialy at 09:00