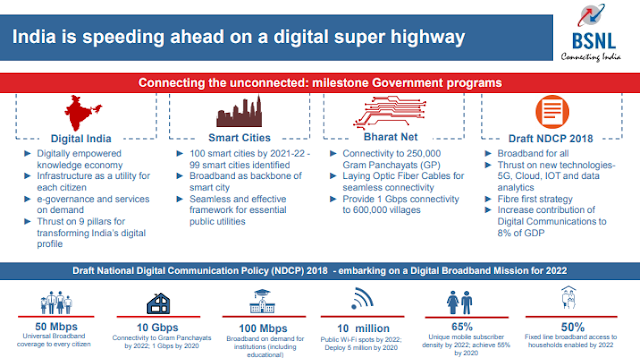 a. Provide Universal broadband coverage at 50 Mbps to every citizen
b. Provide 1 Gbps connectivity to all Gram Panchayats of India by 2020 and 10 Gbps by 2022
c. Enable 100 Mbps broadband on demand to all key development institutions; including all educational institutions
d. Enable fixed line broadband access to 50% of households
e. Achieve ‘unique mobile subscriber density’ of 55 by 2020 and 65 by 2022
f. Enable deployment of public Wi-Fi Hotspots; to reach 5 million by 2020 and 10 million by 2022
g. Ensure connectivity to all uncovered areas 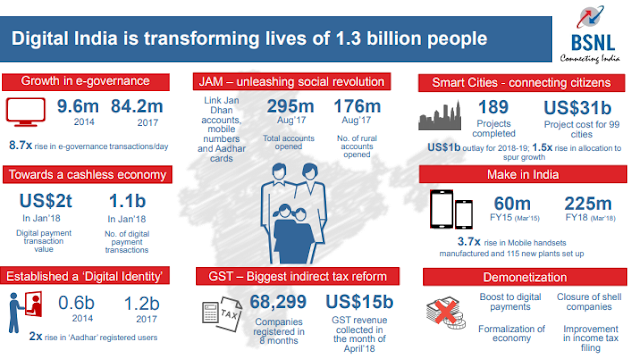 Digital India is already transforming the lives of 1.3 billion people. There is growth in e-governance, there is some progress towards cashless society, smart cities are growing and 'Made in India' smartphones are growing. 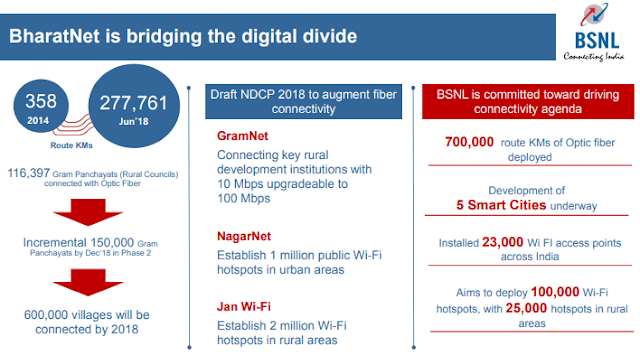 With a view to narrow the digital infrastructure gap with the developed economies, the government is looking at establishing a ‘National Broadband Mission – Rashtriya Broadband Abhiyan’ to secure universal broadband access. The Draft NDCP 2018 has the following clauses:

(b) Implementing a ‘Fibre First Initiative’ to take fibre to the home, to enterprises and to key development institutions in Tier I, II and III towns and to rural clusters:  i. According Telecom Optic Fibre cables the status of Public utility  ii. Promoting collaboration models involving state, local bodies and private sector as necessary for provision of shared duct infrastructure in municipalities, rural areas and national highways  iii. Facilitating Fibre-to-the-tower programme to enable fiberisation of at least 60% base stations thereby accelerating migration to 4G/5G  iv. Leveraging existing assets of the broadcasting and power sector to improve connectivity, affordability and sustainability  v. Incentivising and promoting fibre connectivity for all new developmental construction  vi. By making requirement for telecom installations and the associated cabling and in-building solutions mandatory in in all commercial, residential and office spaces by amending National Building Code of India (NBC), through Bureau of Indian Standards (BIS)

(d) Facilitate the establishment of Mobile Tower Infrastructure by:  i. Extending incentives and exemptions for the construction of telecom towers  ii. According accelerated Rights of Way permissions for telecom towers in government premises  iii. Promoting deployment of solar and green energy for telecom towers

(e) Improve international connectivity and reduce the cost of international bandwidth by facilitating setting up of International Cable Landing Stations by rationalising access charges and removing regulatory hurdles  i. Encourage sharing of active infrastructure by enhancing the scope of Infrastructure Providers (IP) and promoting deployment of common sharable, passive as well as active, infrastructure; 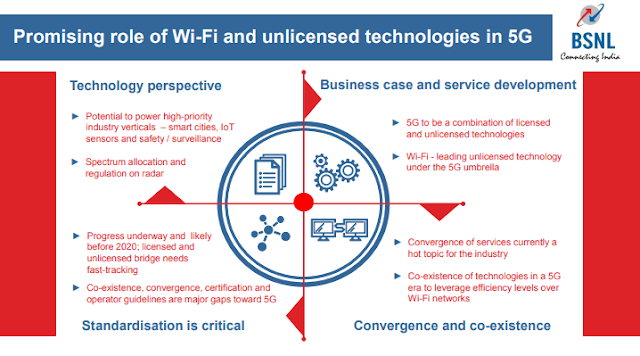 State owned Indian telecom corporation Bharat Sanchar Nigam Ltd (BSNL) announced in March of this year that they had deployed 18,000 hotspots around the country and planned to deploy a total of 1,00,000 Wi-Fi hotspots across India by the end of 2018.

On that day BSNL, in partnership with QuadGen,  launched free wi-fi services at Udwada village, Valsad district in Gujarat. The village has been adopted by Information and Broadcasting (I&B) Minister Smriti Irani under Sansad Adarsh Gram Yojana.

Speaking on the occasion, Irani - who is also Minister for Textiles - said,


The hotspots cover nearly 90 per cent of the village and will service multiple concurrent users at any point of time.

Telecom Minister Manoj Sinha hoped this service as part of the Digital India programme will fuel the availability of affordable data and voice services in the country. He asserted:


"The Digital India movement has ensured that the country has the cheapest data and voice services in the world. Today, India uses more data than the US and China, combined."


More recently  BSNL has entered into a deal with Japan’s Softbank and NTT Communications to rollout 5G and internet of things (IoT) technology in India.


“We have signed an agreement with Softbank and NTT Communications to roll out 5G and IoT products and services in India. Under the agreement, we will look at solution specially for the smart cities,”

Stated BSNL chairman and managing director Anupam Shrivastava in an interview.
He said most of the BSNL competitors are still looking at monetising their 4G services and hence leading companies have started looking at the State-run firm for 5G services roll out. According to Mr Shrivastava:

“We have benefited by lead taken by our minister (Manoj Sinha). He has held various meetings at global level on 5G. We capitalised on those opportunities and signed agreement for the next generation technology. 3G was launched in India after seven years the technology was available in other foreign markets and 4G services after four years’ lag but 5G will be launched in India in 2020 as soon the standards are freezed by ITU."

Telecom minister Mr. Sinha has said that 5G service launch in India will happen at par with other leading nations.

Mr Shrivastava insists BSNL is working to finalise test cases where 5G can be used in India:

“We are in advance stages of starting 5G field trials. Government is in agreement to provide us 5G spectrum for trials. We expect to start field trials very soon,”

The Telecom Regulatory Authority of India has recommended the auction of about 8,644 MHz of telecom frequencies at an estimated base price of ₹ 4.9 lakh crore. The government is yet to finalise details of allocation of spectrum for 5G services.

Under the agreement with Softbank, BSNL will look at collaborating with the Japanese firm for its satellite constellation which will have around 900 satellites to provide high speed internet services across the globe.

BSNL has signed an agreement with Nokia and Cisco as well for developing 5G ecosystem.

BSNL has also and Swedish telecommunication gear maker Ericsson have signed a Memorandum of Understanding (MoU) over 5G and Internet of Things. The two will create a joint roadmap for the development of 5G and IoT in India, a joint statement to the media said. This new partnership with see BSNL and Ericsson develop “5G use cases, knowledge sharing on 5G technology concepts, industry and innovation trends including 3GPP standardisation progress.”

Meanwhile a week ago Nokia announced that it will supply, install, commission and maintain the Smart Telecom Poles across India in all of BSNL's telecom circles.

Under the contract, Nokia will also integrate the poles with smart LED lighting systems, CCTV cameras, digital billboards and environmental sensors that provide strong revenue generation potential for the operator.
The smart pole has been designed for emerging markets and built in India based on Nokia's global services expertise. With its Smart Telecom Pole and services expertise, Nokia will help BSNL provide access to mobile connectivity and smart solutions for citizens while ensuring the poles meet the aesthetic and spatial needs in modern cities. Nokia will optimize the telecom infrastructure to provide a shared, secure and scalable platform that ensures the best use of urban resources and prepares BSNL for the needs of new technologies such as IoT and 5G. The pole can be adapted to diverse geographical environments and climate conditions. It also houses a custom-designed power backup solution to provide continuity of services during power outages.

No doubt with these ambitious deals and plans BSNL is very much competing with Reliance Jio and not taking the roll out of Jio GigaFiber lightly and is doing its bit to maintain its market share in the fiber to the home (FTTH) segment.

BSNL Broadband has apparently once more revised its FTTH broadband plans to now offer more data and faster broadband speeds. BSNL Broadband is offering up to 100Mbps speeds till 750GB, and up to 2 Mbps speed beyond that limit at Rs 1277 monthly and Rs 14,047 annual charges. This facility is available for all users in all circles.

Jio GigaFiber is offering 100Mbps speeds as well but for free for a period of three months at a onetime security deposit fee of Rs 4500.

BSNL Broadband too is taking no charges for activation and installation, but users are required to pay onetime security deposit fee of Rs 500 and ONT along with ADSL WiFi Modem charges come at Rs 200 rental per month and security deposit charges (refundable) of Rs 1500.

However, what may give Jio GigaFiber the edge is the fact that they are offering a ‘connected home’, which means that Jio GigaFiber router will be able to connect with the Jio DTH and Reliance Jio enabled smartphones, thus converting a house into a smart home. Reliance Jio is also expected to offer all this at prices as low as Rs 500 per month.

Ultra HD entertainment, multi-party video conferencing, virtual reality gaming, shopping and smart home solutions at an affordable price is what is being offered by Jio GigaFiber. So, how existing broadband players adapt to this challenge can be seen after the commercial rollout of Jio GigaFiber.