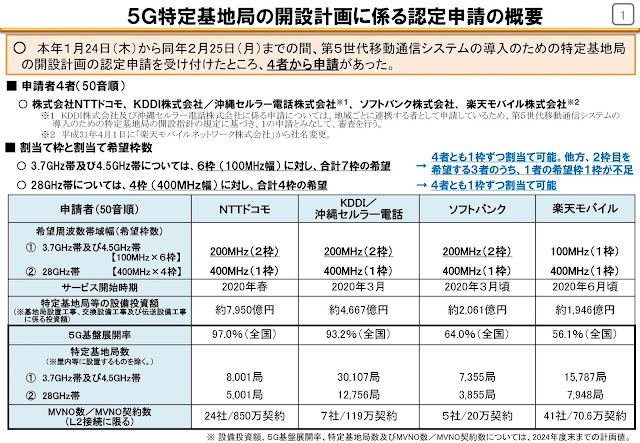 The MIC also published on the ministry website its approvals relating to 5G BTS deployments for all four companies. Based on a report from the Radio Frequency Control Council, 5G frequency authorisations are as follows:

The MIC’s conditions will likely require the four MNOs to balance sizeable investment programmes against the need to remain profitable, and with new competition looming in the shape of Rakuten Mobile – which is set to kick off its fledgling 4G network this October, targeting 15 million subscribers in the medium-term – price competition is expected to intensify.

All four firms aim to commercialise 5G services in 2020, with KDDI and Softbank pencilling in launches in March and Rakuten in June 2020, and taken together the big four will invest JPY1.6 trillion (USD14.4 billion) in the five-year deployment phase, of which at least JPY795 billion is being spent by DOCOMO, JPY466 billion from KDDI, JPY206 billion (Softbank) and JPY194 billion (Rakuten).

This is a big win for Rakuten, Japan's newest mobile operator and their CEO H. Mickey Mikitani was quick to announce this win on Twitter.


It was also interesting to see NTT Docomo get the 4.5 GHz band. They are pioneers of this band and have worked with NEC, Nokia, Huawei, etc. on trials in this band. They have also conducted URLLC tests in 4.5 GHz band. An NEC press release back in January talked about providing 5G base stations to NTT Docomo supporting 4.5GHz and 28GHz bands. 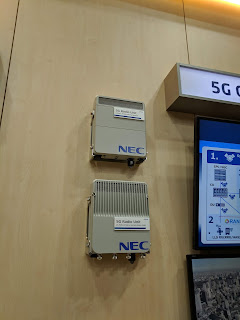 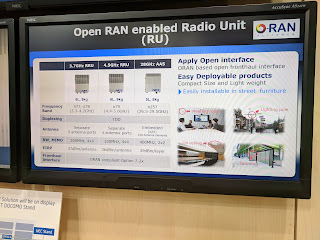 NEC was showing its Open RAN (O-RAN) enabled Radio Unit (RU) at MWC 2019 which are planned to be used with NTT Docomo 5G base staations.

NTT Docomo 5G plans can be seen in their MWC 2019 5G presentation that was being shown on their booth and is also available online here.

In a report by Reuters:

One of the conditions from the telecoms ministry was to “take sufficient cybersecurity measures including responding to supply chain risk”.

Japanese operators are required to install 5G base stations in half of 4,500 blocks, or districts, established by the ministry within five years, Nikkei Asian Review said. Docomo and KDDI both target 90 per cent coverage by 2024; SoftBank and Rakuten are aiming for 64 per cent and 56 per cent respectively.

All four operators are targeting the launch of  mobile 5G services sometime in 2020. In December 2018 they stated they have no plans to deploy gear from Huawei and ZTE in the networks, following a ban on the use of Chinese telecoms equipment by government agencies in the country.

Docomo, KDDI and SoftBank are also working toward launching limited commercial 5G services in 2019, with pilots due to take place at the Rugby World Cup.