Cambodia Getting Ready for 5G 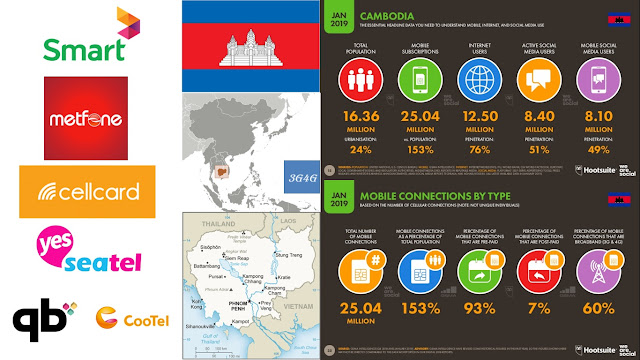 UN-OHRLLS report on Cambodia provides a good summary of current state of play in Cambodian Telecoms market. From the report:

Cambodia has a history of a highly competitive telecommunications market characterized by on-going mergers and acquisitions. It also has the distinction of being the first country in the world where mobile subscriptions surpassed fixed telephone lines (in 1993). There are presently six active mobile operators, up from three in 2000 but down from a peak of nine in 2012. Given the number of active operators in relation to its population, Cambodia has been cited as the "most saturated market in the world." The largest largest operator (by subscriber share) is Smart, majority-owned by the Malaysian AXIATA group. AXIATA is active in nine other Asian nations.

VIETTEL, the Vietnamese mobile group, is the second largest following the purchase of Beeline in 2015 and uses the Metfone brand. Viettel is active in nine other countries including neighboring Lao PDR.

CAMGSM, operating under the brand CELLCARD is one of the oldest operators, in service since 1996 and 100% locally owned. These three account for 98% of the market.

GSM mobile coverage covers 99% of the population and subscription penetration crossed the 100% mark in 2011. Home availability of cell phones is high for an LDC, standing at 87% including 96% in urban areas and 86% in rural ones according to the 2014 Demographic and Health Survey.17 By 2016, 97% of the population owned a mobile phone.

Mobile broadband has developed rapidly due to the scarcity of wired infrastructure with the first 3G network launching in 2007. SMART was the first to launch fourth generation (4G) Long Term Evolution (LTE) technology in 2014, and it is available across 25 provinces covering over half the population. It also introduced so-called 4.5G in 2017 achieving speeds of up to 600 Mbps in selected areas. The other operators launched 4G/LTE in 2015. Of note is there are seven mobile broadband operators compared to six mobile operators as Kingtel operates a fixed wireless 4G/LTE network (Figure 0.1 above, right). Most Internet access is via mobile phones and almost half the population (48%) had a smartphone in 2016. 3G covered 66% of the population and 4G/LTE 58% in June 2017. The main constraint for extending mobile broadband coverage is the lack of low frequency spectrum which has a wider coverage area than higher frequency and hence results in lower investments costs. It is expected that this will be made available upon the completion of the transition to digital broadcasting when lower frequency (700 MHz) will be freed up. 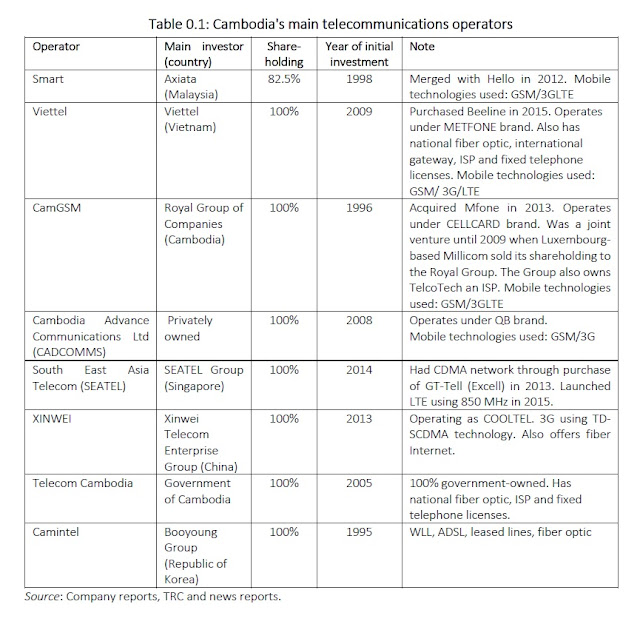 State-owned Telecom Cambodia is the main fixed telephone service provider. In addition, there are seven other operators licensed using either copper lines or wireless technology to provide fixed telephone service. Due to the popularity of mobile, fixed telephone subscriptions have been in decline since 2012. Fixed broadband is provided through a mixture of technologies including ADSL (a technology that uses the copper telephone line going to the premise), fixed wireless, cable modem and fiber. There are over 30 Internet Service Providers (ISPs) including mobile operators with the top ten capturing 98% of the market (Figure 0.1, right). There were 117,049 fixed broadband subscriptions in June 2017, just over 1% of total Internet subscriptions in the country. Nevertheless, Cambodia ranks 12th among LDCs in fixed Internet penetration. Spider web tangles of overhead fixed broadband wires are quite visible in urban areas and the city of Phnom Penh has ordered the wires to be buried underground.

Back in Jan 2019, Telecommunication Regulator of Cambodia (TRC) reported that the number of registered mobile phone SIM cards reached more than 19 million in the first 11 months of last year, an increase of more than three per cent compared with the same period in 2017. The number of registered SIM cards provided by six mobile operators reached 19.3 million at the end of last year, up 3.78 per cent on 2017. The number is equivalent to 120.11 per cent of Cambodia’s total population of more than 16 million, and it was an 800,000 increase on the 18.5 million subscribers over the same period in 2017.

The report shows that mobile internet usage also showed a rapid increase, with 12.9 million subscribers using their mobile phones to access online content last year – an increase of 22.79 per cent – while 34 operators provided fixed-internet to 147,596 users – up 9.16 per cent. The report also showed that Cambodia currently has seven fixed-line operators – companies offering a telephone landline service – with 91,331 users, down 27.46 per cent from 125,908 users in 2017.

Nikkei Asian Review reported back in May, The buzz around 5G mobile technology is building in Cambodia as major carriers plan to try out services this year and a state-owned telco teams up with China's Huawei to roll out a network in 2020. Three major carriers are expected to launch trial services this year, including Cellcard, a telco owned by Royal Group, one of the country's biggest conglomerates.

Cellcard CEO Ian Watson told the Nikkei Asian Review that the company will choose network vendors by the end of next month and launch a 5G service on the 3.5GhZ frequency in the last quarter of 2019. Watson said Cellcard's current network vendors, Nokia and ZTE, were options for the rollout, with the Finnish telecom giant likely to "get some of the work."

The first stage would include about 1,000 5G base stations across Phnom Penh, Siem Reap and Sihanoukville, he said. Watson added the company will continue to "maximize" its 4G services and plans to invest $250 million over the next three years in its network.

Viettel, busy pursuing its own 5G service in neighboring Vietnam, was less forthcoming about its plans for the technology in Cambodia.

Despite the flurry of activity, industry analysts reckon it could be several years before serviceable next-generation data networks cater to ordinary consumers across the developing country. They point to the scale of investment needed, the high cost of the few 5G-capable handsets currently available, and Cambodia's nascent mobile internet penetration relative to bigger regional economies.

Smart itself conceded that there are concerns over how to monetize the new technology.

Keen to see 5G adopted in Cambodia, the government is also pursuing a 5G network through an agreement with Huawei Technologies, signed last month in Beijing.

The memorandum of understanding will see the Chinese tech giant work with state-owned Telecom Cambodia, or TC, in a bid to launch services starting next year. 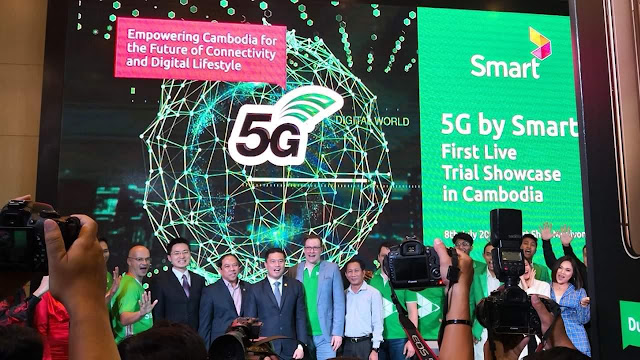 Last month, Reuters reported that Cambodia’s Smart Axiata said it had begun 5G trials in partnership with China’s Huawei Technologies on Monday and could start rolling out the mobile network by this year. “It will not be a nationwide coverage from day one, it will be hot spot first, it will be an urban areas first and then we will gradually expand,” Smart Axiata’s chief executive Thomas Hundt told reporters after the trial.

Metfone is the market leader with a 48 per cent share by subscribers, Q2 data from GSMA Intelligence showed. Nearly 11 per cent of its more than 10 million subscribers are on 4G plans. 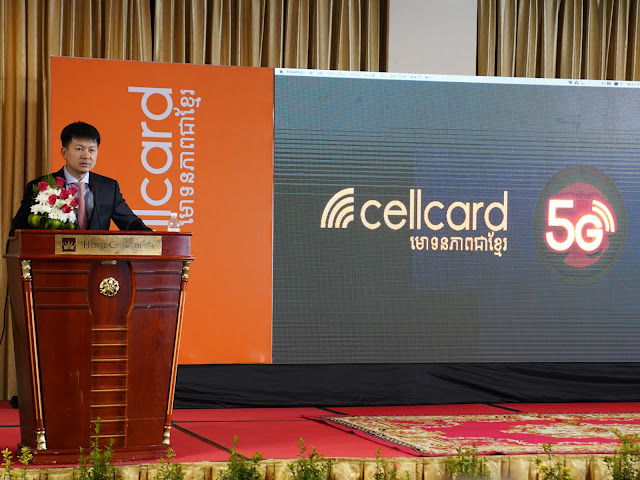 Cellcard tested 5G back in October 2018, making first 5G call over our 3.5 GHz frequency and hitting an impressive 1.5 Gbps. Their 4.5G LTE customers receive up to about 137 Mbps.

It's interesting to see that Cambodia is going to jump the 5G gun. We will have to wait and see what kind of success they achieve with it.