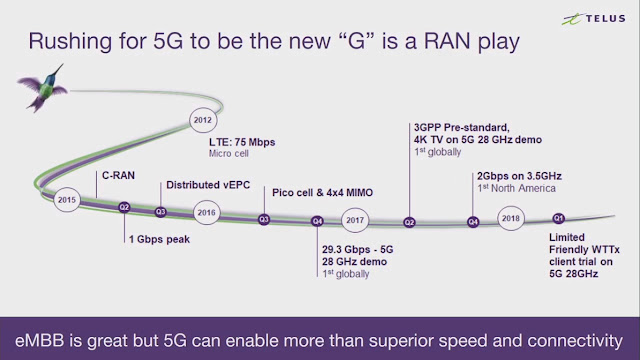 Ibrahim Gedeon, CTO of Telus, Canada said that and he's not happy with the industry's focus on speed. "We just spend more money and don't make more money," he said during a keynote presentation at Big 5G Event in Denver (embedded below). "5G is letting us down."

According to this Light Reading report:

Gedeon clearly isn't a fan of some of the more advanced "use cases" that are typically associated with 5G, either. "Can you please raise your hand if you would like to be one of the first people in the world to have a surgeon operate on you using a reliable network?" he joked. He seems equally unconvinced by talk of 5G-powered autonomous cars. Everyone appears to be doing their own thing, he said, perhaps alluding to some of the recent battles involving carmakers and telecom players over the technologies that will ultimately be used.

So what does Gedeon recommend? In a nutshell, he thinks there should be less focus on the radio side and more on how 5G will affect other parts of the telco network, and specifically the "edge" -- a promised land of opportunity for telcos that has been somewhat overlooked.

At least, it has been overlooked in some critical ways, according to Gedeon. While operators such as Verizon, in the US, and Deutsche Telekom, in Germany, are busy talking about their edge plans and trialing new services, the industry has yet to address some critical edge-related issues. Above all, if the edge means deploying the telco cloud and IT resources at customer premises, such as a sports stadium, then where is what Gedeon calls the "demark?" What does the customer actually own?

"We need to think of the demark. We need to think about APIs and gateways … Everyone talks about cloudifying, but everyone is busy doing EMBB [enhanced mobile broadband] and autonomous vehicles," said Gedeon.

It should be noted that Telus acquired reasonable amount of 600 MHz spectrum in Canadian spectrum auctions last month. Unfortunately that is the coverage layer spectrum and won't give good speeds.

The talk from Big 5G event can be viewed here.
Posted by Zahid Ghadialy at 08:05