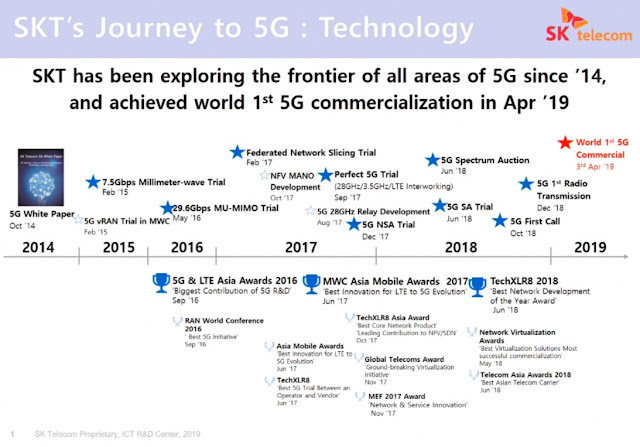 No doubt SK Telecom is one the operators leading the way on 5G. Here we look at some of their exciting upcoming initiatives that will change the everyday lives of their customers.

Firstly regarding autonomous driving: SK Telecom and Seoul Metropolitan Government have entered into an agreement to jointly develop and verify HD Map technologies for autonomous driving. They will cooperate on the development of services for HD Map covering a total of 121 kilometers of public roads. These roads have been selected by Seoul’s Cooperative-Intelligent Transport System (C-ITS) project, by installing 5G Advanced Driver Assistance Systems (ADAS) to 1,600 buses and 100 taxis. This project is designed to develop a transportation system infrastructure, including a 5G network and V2X system, on major roads of Seoul. In January this year, SK Telecom won a contract to deploy 5G infrastructure and services in the area. A total of 1,700 units of 5G ADAS installed in buses and taxis will collect 124 different types of road/traffic information and transmit the data via 5G network to support real-time update of the HD map. 5G ADAS, installed in public transportation vehicles, are designed to support vehicle-to-everything (V2X) communication. 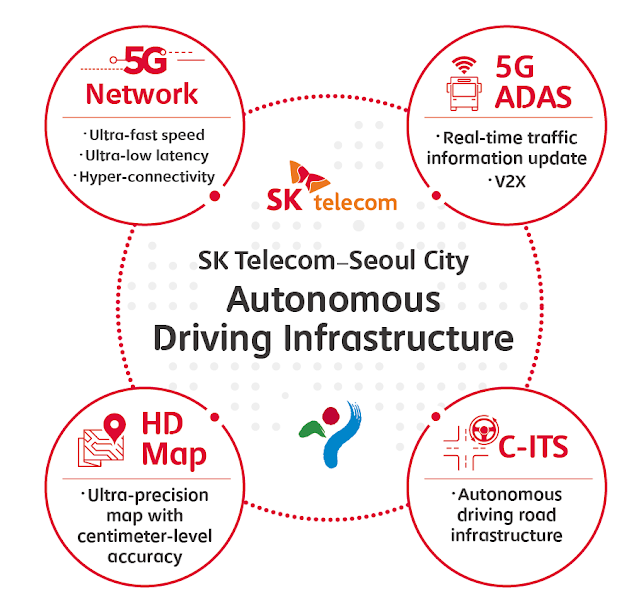 SK Telecom and the Seoul Government also intend to create an autonomous driving ecosystem by opening up related infrastructure such as HD maps and data collected by 5G ADAS. The operator has announced a collaboration with three Korean cities — Songdo, Yeongjong, and Cheongna — to use 5G for “HD maps” that will cover 132.9 square kilometers down to the centimeter, including lanes, road slopes, and speed limits. They expect that the maps will be updated in real time with changes including road conditions, all in the service of enabling self-driving vehicles to safely travel the roads.


Regarding the introduction of 5G technology into hospitals; SK Telecom has signed a MOU with Yonsei University Health System to provide digital solutions across 5G, artificial intelligence (AI), augmented reality (AR), and the Internet of Things (IoT) for their hospital intended to open in February 2020.

According to SK Telecom:

"The 5G-powered digital hospital will be equipped with SK Telecom's AI speaker NUGU to enable patients with physical difficulties to easily control their beds, lighting, and TV with their voice. They can even use NUGU Call service to get medical assistance in case of emergencies. Moreover, the 5G-powered digital hospital will offer AR-based indoor navigation service through the application of indoor positioning and 3D-mapping technologies to enhance the convenience of patients and visitors."

Patients in isolation wards will also be able to receive visitors via holographic projections, the carrier said, while facial recognition technology will be used for medical workers to improve security. 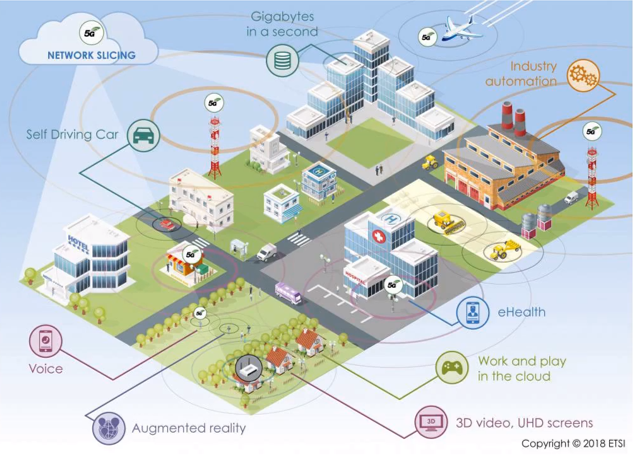 Regarding augmented and virtual reality these are key areas of focus for the operator. Using augmented reality technology, the large fire-breathing dragon was streamed flying around the SK Happy Dream Park during the opening day of the Korea Baseball Organization.

The dragon was streamed both to the LED baseball scoreboard installed at the stadium and via sports broadcasting channels for fans watching the game on TV and smartphones.

The demonstration arose from SK Telecom's focus on the development of 5G-based services to support its commercial network, which launched in December last year.

Another major way SK Telecom want to incorporate this new technology into everyday life is through 5G-powered offices.

One such technology applied to the 5G smart office is a “5G walking-through system,” where people can pass through the entrance via face recognition. Employees had been required to carry identification tags to get through security at the entrance.
Workers are also able to convene remote conferences similar to those seen in sci-fi movies. While not as advanced as creating holograms in the real world, attendees could talk to each other’s avatars in cyberspace.

The telecom company said it established the smart systems at its office in Seoul and has been operating it as a test bed. It plans to develop and specify business models in cooperation with cloud service providers as well as hardware and software partners.
SK Telecom said it installed IoT sensors at places such as ceilings and corridors of the office to collect information on temperature, brightness and humidity. Such information is delivered to servers in real time, and air conditioners and other devices are controlled automatically.

The 5G virtual desktop infrastructure (VID) docking system enables to workers to do their work even if they do not have a laptop or PC by connecting their smartphones to the docking pad. "T real telepresence" is a system combining VR and AR technologies, enabling workers at different locations to have a meeting and watch visual materials together though simultaneous log-ins. The 5G cafeteria offers an unmanned vending machine powered by AI technology as well as a barista robot.

In fact the South Korea’s government recently announced that it expects its robot industry to grow to 15 trillion won ($12.6 billion) by 2023, from 5.7 trillion won in 2018. On March 21 it said supporting the industry is a key national goal. Some of the growth will come from the use of robots in elder care, medicine, and logistics, as well as in entertainment and other service industries.

SK Telecom is making an AI speaker that will project holograms of K-pop stars and other celebrities. The technology is being developed for use in concerts and other performances.

“AI would become like friends that could be accessible anywhere and anytime,” says Cho Ikhwan, a leader of the augmented-reality and virtual-reality development team at SK Telecom. “It’s a totally new experience to feel AI robots come alive.”

In the Brooklyn 5G Summit Recently, Mr. Jong Kwan Park, SK Telecom, gives a snapshot of the Korean 5G customer and the achievements of the company regarding its 5G journey and deployment specifications. The talk is embedded below: