EE: 5G is going to change everything all over again

EE was the first of the UK operators to launch its 5G network in six UK cities on May 30th 2019. Belfast, Birmingham, Cardiff, Edinburgh, London, and Manchester, were the first cities to get 5G, and later this year will also see additional rollouts in Bristol, Coventry, Glasgow, Hull, Leeds, Leicester, Liverpool, Newcastle, Nottingham, and Sheffield.

BT / EE is launching their 5G network in the UK tomorrow. You can learn more about the architecture details of this #5GEE network from the annual IET lecture by @960sutton here 👇. It's one of the very popular posts on 3G4G blog 💯 #5GTheAdvent #3G4G5Ghttps://t.co/EB3yp8NuXR pic.twitter.com/RWRXbaGStX
— 3G4G (@3g4gUK) May 29, 2019

EE's device range will include the currently-delayed Samsung Fold, Oppo Reno 5G, Samsung Galaxy S10 5G, LG V50 ThinkQ, and the Huawei CPE Pro and HTC 5G smart hub. It doesn't include any Huawei handsets in its current 5G line-up. EE CEO Marc Allera said EE had put the Huawei 5G devices "on pause" until it has more information and confidence that the handsets would be supported for the lifetime of the devices. But the vendor's equipment is still in EE core network; the UK government is currently deciding whether Huawei kit should be allowed in the nation's 5G networks.


"We have worked for decades with the government and our security services collaborating on our networks both fixed and mobile. We agree and sign off our architecture and how we design and build those networks with their support. At the moment we have no instructions to change our plans but it's important to say that we have also have a multi-vendor policy and architecture. Our core and our radio access network, will be made up of a number of providers Huawei will be part of that but not the only part."

While some people may wonder why they need 5G, Allera said people said the same thing about 4G "and look how much has changed in the way people live their lives". He said that 4G has sparked a huge shift and said "5G is going to change everything all over again." 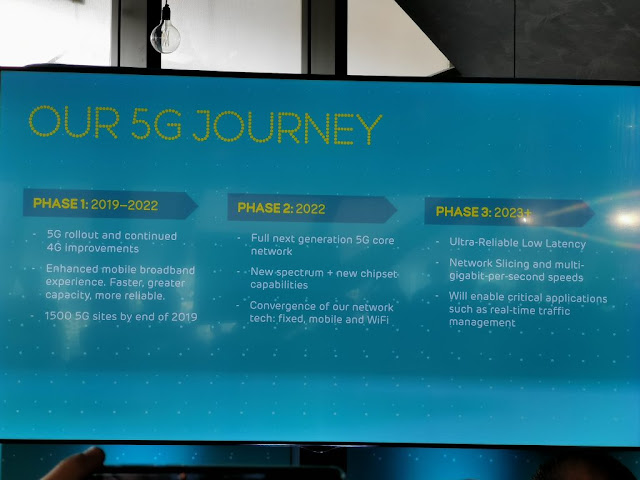 EE said its 5G strategy has three phases; 2019 to 2022 sees 5G rollout and a ‘non-standalone’ deployment focused on using the combined power of 4G and 5G to give customers the fastest, most reliable mobile broadband experience they’ve ever had and 1,500 5G sites by the end of this year.

Phase 3, from 2023, will introduce Ultra-Reliable Low Latency Communications (URLLC), Network Slicing and multi-gigabit-per-second speeds. This phase of 5G will enable critical applications like real-time traffic management of fleets of autonomous vehicles, massive sensor networks with millions of devices measuring air quality across the entire country, and the ‘tactile internet’, where a sense of touch can be added to remote real-time interactions. 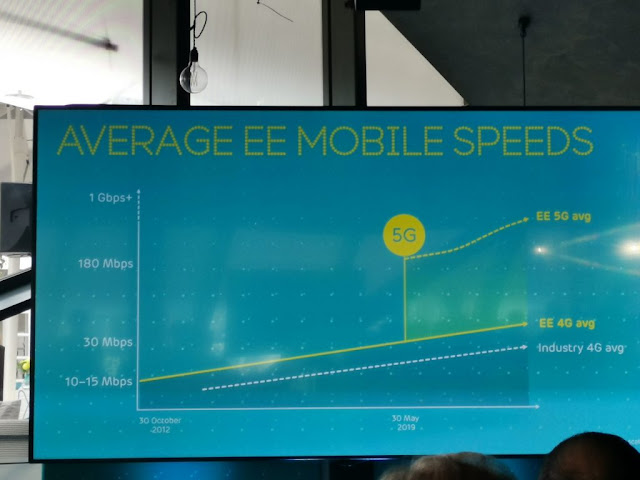 EE CEO Marc Allera said that he expects users to hit speeds of 150Mbps on average, and is confident that some customers will even break the fabled 1Gbps milestone on 5G, as some early users of Verizon’s 5G network have managed in parts of the US. 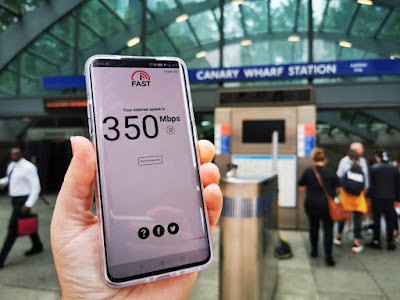 JComms blog did speed tests on the EE network in both London and Birmingham (two of the launch cities) with the OnePlus 7 Pro 5G  he wasn't able to get results approaching or exceeding 1 gigabit. However, he did get – between 300 and 600Mbps – which are more than required for most needs. Speeds in excess of 300Mbps in city centres, in particular places like Canary Wharf, are particularly impressive.

EE came out of Ofcom’s first 5G spectrum auction with 40Mhz of 3.4GHz spectrum, specifically the 3540MHz – 3580MHz part of the band. They paid £302,592,000 for that.
They won more of the 3.4GHz band – which is ideal for 5G – than Three (which won just 20MHz), but the same amount as O2 and less than Vodafone, which came away with 50Mhz. However, EE also has 255MHz of immediately useable spectrum in other bands less suited to 5G, which means it has more spectrum overall than any other UK network.

It’s also worth noting that there are set to be future 5G auctions for spectrum in the 3.6GHz - 3.8GHz bands and the 700MHz band, as well likely as the 26GHz and 8GHz bands, and potentially others, which Ofcom is set to discuss at WRC-19, so there’s time for EE to collect more spectrum, and it already has more overall than any rival – albeit less that’s ideally suited for 5G than some.
EE will also be transforming Glastonbury 2019 into the UK’s first 5G-connected festival.
The 5G network will mean festival-goers stay connected with superfast phone charging and power bar swapping at the EE Recharge Tent, as well as helping to develop the official Glastonbury 2019 app.

To keep music fans connected throughout the weekend, EE will be installing five temporary masts across the 900-acre Somerset site broadcasting 2G, 3G, 4G and 5G for the first time. Those lucky enough to be at the festival will be able to share their unforgettable moments with friends and family back home via our 5G-powered WiFi – meaning they won’t need a 5G-compatible phone to experience our brand-new 5G network technology.

In 2017, an incredible 54 terabytes of mobile data was used over the festival weekend by Glastonbury-goers sharing photos and videos of their favourite festival moments, streaming content and keeping up to date with events away from the festival.

But EE think Glastonbury 2019 will dwarf that, with up to 40% more data being used over the festival weekend. That’s a staggering 70 terabytes of data – enough to download Stormzy’s hit song ‘Shut Up’ 19 million times or post 784 million times on Instagram.