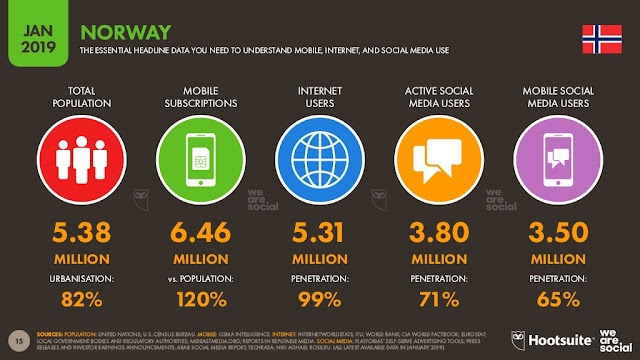 Norway has a population of 5.4 million with a mobile market dominated by Telenor Mobil and Telia, the only two operators with national coverage. Telia Norway has 2.3 million mobile subscriptions, while Telenor roughly 3.1 million mobile subscriptions.Both Telenor and Telia have outstanding 4G availability across the rest of the country, and as a result, Norway had the highest percentage of 4G use of any of the Scandinavian countries.

Ice is the third network upsetting this duoply, a much recent entrant, having only started commercial sales in 2015. They had 422 thousand smartphone subscribers as of 30 June 2018 and operate their own 4G network in some regions of the country, most notably major cities such as Oslo and Bergen, and claim to cover around 80% of the population with their own infrastructure. 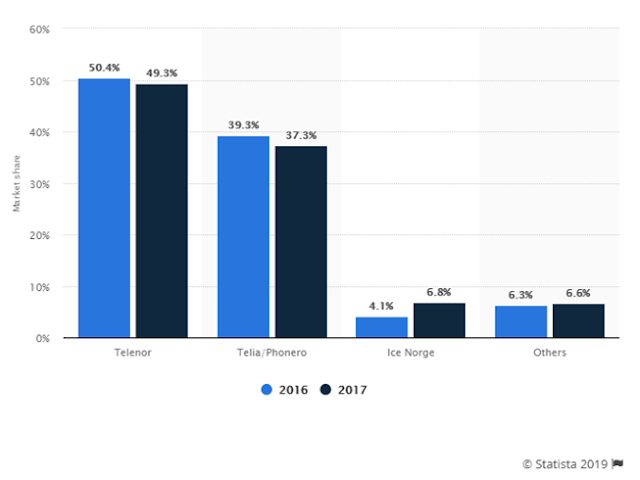 Norway has completed an auction of mobile spectrum in the 700 MHz and 2.1 GHz bands. The smallest operator Ice was the biggest spender, acquiring frequencies in both bands, and Telenor and Telia also bought licences for the 700 MHz band. In total, the auction raised NOK 735 million (€75 million / $85 million).

Ice acquired the 2x15 MHz offered in the 2.1 GHz band for the minimum price of NOK 75 million (€7.7 million / $8.7 million) as well as 2x10 MHz in the 700 MHz band for NOK 262 million (€26.8 million / $30.4 million). The operator is still building out its mobile network in Norway and noted that the new frequencies are a "bonus" not included in its original plan. As a result of the opportunities with the 700 MHz band, it will be able to reach the target of 95 percent population with fewer base stations, reducing capex in 2019 and 2020 compared to previous estimates.

The 700 MHz spectrum will be available from 01 November 2019 and is expected to be a key component of 5G network roll-outs as well as boosting 4G capacity. The operators will be required to cover 40 percent of the population within five years with speeds of a minimum 5 Mbps with the new frequencies.


“With ice, Norway is at the forefront of the development of 5G network and services. ice is building a brand new 5G-ready mobile network with Nokia, one of the world’s leading suppliers of mobile technology. We continue to invest in and expand our national 4G network, even as we prepare for the next generation of mobile networks. We will always ensure Norway gets top quality services, and we look forward to exploring the new services we can introduce with 5G technology.”

And until 5G can be deployed in Norway, Ice subscribers will still benefit from optimized 4G performance, coverage and capacity due to the technology upgrade. Under the same agreement, Nokia will also further expand ice’s current 4G network towards nationwide coverage.


“5G is not just approaching fast – it is here already. With the deployment of Nokia 5G-ready RAN and Cloud Core technology, ice is making a big step towards 5G and, together, we are ready to unleash its power. As a long-standing partner and network supplier of ice we have a deep understanding of the network and a long track record of successful projects. We look forward to continuing to support Ice on their journey.”

Ice have already delivered the highest levels of Consistent Quality in testing across all operators in the Nordics, delivering a high quality cellular connection capable of delivering HD video calls more than 90% of the time.

For users outside of ICE’s own coverage, the network has a roaming agreement with Telia. According to Tutela’s data, ICE subscribers are on Telia’s network around 1/3rd of the time.

When roaming on Telia’s network, Ice users do benefit from Telia’s superior coverage, although data speeds appear to be a little slower for Ice users compared to Telia users. Ice users see download speeds 17% slower than Telia users in the same areas, although the speeds are still far in excess of the consistent quality threshold.

.@iceno_ks is the mobile data usage leader in Norway with 5,0 GB per SIM per month in 2018. Narrowly ahead of @telianorge, much ahead of @TelenorNorge. @Chilimobil is an MVNO, but since it was first with unlimited, its uptake in average usage from 0,3 to 4,8 GB is interesting. pic.twitter.com/bp2FOSV2Vk
— tefficient 🚥 (@tefficient) May 13, 2019