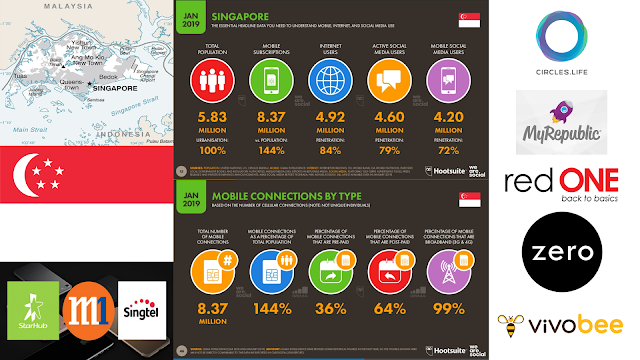 Back in 2016, there were three major Singapore operators— Singtel, StarHub and M1. The cheapest SIM-only plan with 3GB of data cost $20 from Singtel, whilst users on M1’s network had to pay $125 for 13GB.

In 2016 the mobile virtual network operator (MVNO) Circles Life entered into the market. Since then, more MVNOs have flooded the scene. MVNOs do not own or operate any network infrastructure and have to lease it from Singtel, M1 or StarHub at a cost. For example MyRepublic and VivoBee use StarHub’s network, while Zero Mobile and Zero 1 are hosted on Singtel. Circles.Life, the first MVNO in Singapore, has a partnership with M1.

Fast forward to 2019, and prices have fallen. That same $20 will buy you 20GB of data on Singtel’s network, with similar deals available from the other operators. However, operating a wireless network hasn’t suddenly got cheaper; in fact, with the deployment of LTE-Advanced technology and new spectrum requiring more equipment and cell sites, capital expenditure has been up for Singtel and M1 since 2015.


This decreasing price pressure has been led by this emergence of mobile virtual network operators (MVNOs), which buy wholesale capacity from the network operators and resell the service to consumers. Through aggressive price points and novel rate plans, MVNOs have been able to target particular niches, and have carved out a small but significant market share – the biggest, Circles.Life, claims a three to five percent market share.

The 3 newest MNVOs that have joined the fray mid-2019 are: redONE, ViViFi and Grid Mobile.

Different MVNOs have different market strategies targeting various market segments, such as the lifestyles of various age groups. Circles.Life major selling point was that they offered off-contract data plans. They were more cost-effective than the three big telcos, and able to offer more competitively priced plans than them. Therefore they have become Singapore’s fastest growing MVNO, gaining market share at the MNOs expense and insisting they “gave power back to the consumers”.Circles.Life, MyRepublic and Zero Mobile all target data heavy users who prefer the contract-free route.

VivoBee, which has partnered StarHub, also offers low-cost plans with flexible overseas top-up schemes catered for the foreign workforce. Grid Mobile appeals to millennials with a points system that rewards consumers for loyalty and helps offset their spending.

So is this fierce competition a positive phenomenon? Many analysts seem to think so. For consumers, competition from MVNOs and new entrants should keep prices low, and Singapore’s networks are well-positioned for a rapid transition to 5G, which will enable even lower prices and larger data plans.

For operators, the short-term pain from MVNOs will help protect their long-term positions, and the experimentation with pricing schemes and data plan features can help hone a more sustainable business into the 5G era and beyond.