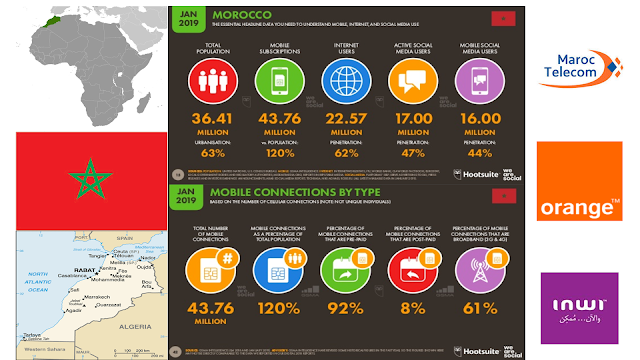 Morocco’s mobile market is one of the more mature in the region, with a penetration rate of about 125%. All three mobile network operators offer fixed-line or fixed-wireless services and have developed mobile data services based on the extensive reach of LTE infrastructure. Growth in mobile data traffic is supported by the popular use of smartphones, which account for about 80% of all mobile phones in use.

The mobile operators are the main providers of internet services, accounting for the great majority of all internet connections. The issuing of LTE licences in 2015 included conditions to ensure that services covered at least 65% of the population by 2020, while the promotion of broadband accessibility nationally is also supported by the National Broadband Plan through to 2022 and by the Maroc Digital 2020 strategy. The extensive deployment of mobile broadband infrastructure will further consolidate the dominance of mobile players in the broadband sector in coming years.

Maroc Telecom, a.k.a. IAM is the biggest mobile provider, mostly owned by UAE-based Etisalat, with the best coverage . In 2015 they have started with 4G/LTE with speeds up to 225 Mbps in major towns that is available for prepaid without surcharges.

A live 5G demonstration was organised at Maroc Telecom headquarters  in partnership with Ericsson  in Rabat earlier this year, showcasing the capabilities of the next-generation mobile technology.

The demonstration showcased several 5G use cases using a standalone end-to-end 5G system from Ericsson, including a prototype radio, baseband, and prototype UE device. The demo delivered 5G throughput, achieving speeds up to 25.8 Gbps, which is the highest speed reached in Africa to date.


Orange is the second provider in the country and mostly owned by Orange in France (formerly called France Télécom). That's why it was decided to rebrand it from the original brand of Méditel to Orange starting in December 2016. Coverage is not as good as Maroc Telecom but still reasonable. 3G is available in most towns, 4G/LTE has been started in 2015 in about 8 towns so far.


Inwi is the smallest provider in Morocco but still reasonable, if you stick to the towns mainly. 4G/LTE has started in 2015 in 26 cities.

Inwi is also conducting 5G trials in collaboration with Huawei and is installing new equipment on its radio to expand its backhaul fibre backbone network.