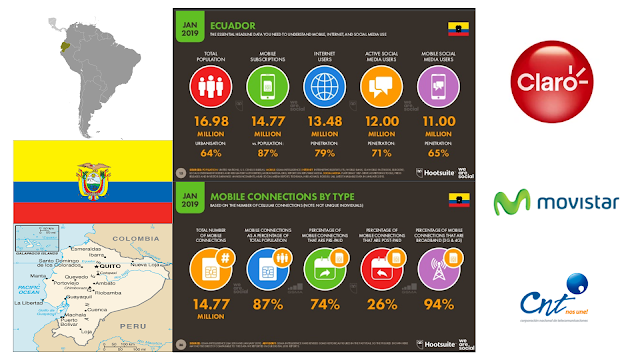 Ecuador has a small telecom market dominated by the mobile sector. The evolution of the market has suffered due to poor infrastructure, topographical challenges and the deploying of networks to remote and mountainous areas is very expensive. Unfortunately there has been a legacy of under investment in telecoms infrastructure.

The mobile sector is shared by América Móvil’s Conecel (trading as Claro), which has a 52.5% share of the market by subscribers, Telefónica’s Otecel (trading as Movistar) with about 30% of the market, and CNT (previously Telecsa/Alegro) with a share of 17.6% share. Thus far the MVNO sector has been slow to develop, partly because the incumbent operators also have their low-cost brands and thus there is little business case for new market entrants. Virgin Mobile is expected to launch a service in Ecuador, following on from similar launches in Mexico, Chile and Colombia.


Claro the leading mobile network operator by subscribers has the best coverage especially in remote areas. 4G/LTE has started in 2015 in Guayaquil, Quito, Cumbayá and Sangoloquí and is rolled out in other regions available for prepaid.

Claro have demonstrated 5G technology at an event organised by the Ministry of Telecommunications in Guayaquil to promote its ‘Digital Ecuador’ strategy. In a statement, the company said interactive exhibits would enable users to experience the faster download speeds enabled by 5G, as well as applications such as virtual and augmented reality, and the Internet of Things (IoT). The operator, which recently announced plans to invest USD500 million in network upgrades over the next three years, also revealed it will soon begin 5G technology tests in Quito in partnership with hardware vendor Huawei. Ecuador’s government outlined plans in July to allocate 3.5GHz spectrum in 2020 in preparation for the launch of 5G services.


Movistar (brand name of Telefonica) is the 2nd network in the country, giving even better speeds in the cities, but a lower coverage: coverage checker outside. 4G/LTE is open for prepaid and available in Guayaquil, Salinas Quito, Cuenca, Azogues, Ambato and Tonsupa in 2016.

Back in September, Commsupdate reported that Spanish telecoms group Telefonica has begun exploring the sale of its Ecuador unit for as much as EUR800 million (USD881.8 million) as part of its ongoing debt reduction efforts, reports Spanish daily El Economista citing unnamed sources. Although talks with potential buyers have yet to begin, the group is studying market conditions ahead of a sale which could attract interest from Millicom (Tigo) and Entel Chile, claims the report. Telefonica Ecuador (operating under the Movistar brand) reported EBITDA of EUR75 million and revenue of EUR252 million in the first six months of 2019.

Back in August, Telefonica did 5G demos with ZTE to prove the benefits of 5G. According to Ecuador TV, the organizers were looking to share with the community the importance, advantages and benefits that will be had with the new 5G technology. Several virtual reality posts were exhibited in which the user can observe the augmented reality in real time. For example, a camera was placed on the eighth floor of the building and when putting on the glasses one could feel the vertigo of the height.

CNT or Corporación Nacional de Telecomunicaciones is the public provider in Ecuador. They focus mainly on ADSL and landline phone connections. It has a mobile network too, but this is rather limited in coverage. 4G/LTE is open for prepaid and gives the best speeds in cities of all operators in the country.

Ecuador Mobile Network Experience Report July 2019 from OpenSignal listed Claro as a winnder of their 'Download Speed Experience' award, following a draw with Movistar six months ago, as the Telefónica subsidiary's growth in this metric has stalled. It was a similar story in Upload Speed Experience, where static growth from Movistar allowed Claro to surge ahead and grab the award. But in both speed metrics, CNT's users saw the greatest improvement.

The 'Video Experience' award was shared jointly by Claro and CNT, as both these operators pulled ahead of Movistar, whose score dropped after winning this metric six months ago. All three of Ecuador's operators now have Fair ratings as CNT's Video Experience score jumped by 13 points (out of 100). Movistar kept hold of our 4G Availability award, but statistically saw no growth in its score over the past six months. CNT increased its score by 8 percentage points to tie for second place with Claro — and both operators are now within 5 points of the leader.

In the cities analysis, CNT managed to win three of the awards in Quito — 4G Availability, Video Experience and Download Speed Experience — while it drew with Claro for Latency Experience. State-owned CNT has also shown the greatest improvement across its scores in this report, and is fast becoming a serious challenger to its bigger rivals.

You can read all details here.
Posted by Zaffareen Khan at 07:35