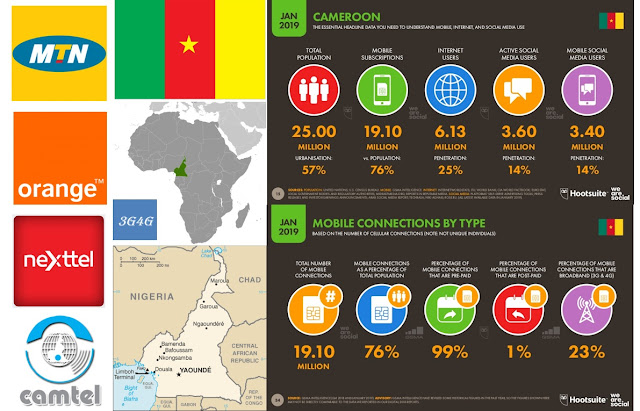 Cameroon was for many years one of the few countries in Africa with a duoply of competing mobile operators. After some delays, Nexttel Cameroon (majority-owned by Viettel) launched a third network in late 2014, including the country’s first 3G mobile service. The three operators serve more than 99 per cent of the country’s 21.9 million connections between them.

LTE services have also developed strongly, with Orange Cameroon securing revised concessions to its existing 3G licence to enable it to launch LTE services and so compete more effectively with MTN. These developments were the catalyst for a fast-developing mobile broadband sector. The investment programs among operators over the next few years will considerably boost mobile broadband services in rural areas of the country, many of which are under-served by fixed-line infrastructure.

MTN is the market leader in the country with a 50% of market share. It has the best coverage and highest speeds. 4G started in 2015 on the very unusual TD-LTE frequency of 2500 MHz (band 41) and is available in all major towns and cities.

Orange is the clear number two in the country with approx 30% of market share. They bought this network from Airtel some years ago. They have launched 4G/LTE too, but have limited it to a much smaller area than MTN so far.

Nexttel (owned by Viettel Group) started in 2014 in Cameroon. Two years later it had already 2.5 million subscribers and is the fastest growing network. It launched the country's first 3G network in 2014, but its 4G/LTE is still in trial mode. It has the most aggressive pricing.

Camtel is Cameroon’s fixed line monopoly operator which has a limited network based on CDMA/EVDO called Fako that is migrating to GSM. In 2016 they rolled out their 4G/LTE network called "X-TremNet" on 1800 MHz (band 3).

Their Fako network is quite unreliable, based on CDMA, not compatible to GSM devices and can't be recommended. However, their 4G/LTE XTremNet network can be a cheap option, if you have coverage. Douala and Yaoundé are covered only so far: 4G coverage list. Because of the limited coverage, it can't be an option for travelling, but may be an option for stationary use in Douala and Yaoundé. Speeds of around 50 Mbps have been reported. They have no fallback or roaming on 2G/3G networks.

Orange received a XAF1.5 billion fee, while the other two operators were charged XAF1 billion each by the country’s Telecommunications Regulatory Agency.

In a statement, the regulator said all three operators had failed to comply with rules set out in September 2015 related to the registration of SIM cards and identification of customers.


It added operators had also been warned for not honouring commitments to improve the quality of their networks, claiming they were “still deteriorating”. The country’s authorities also demanded wholesale rates were cut in some areas, with the aim of reducing consumer prices.

In recent years, Cameroon has come down harder on telecoms operators for failing to comply with regulation, with Vodafone shuttering operations in 2017 due to licensing issues. A year earlier, MTN was hit with allegations of corruption by the country’s National Anti-Corruption Commission.

The only Central African country in the top 10, Cameroon outperformed the average on the four criteria taken into account for the ranking, the report said. These include the number of online shoppers, the security level of servers, the ease of payment and delivery.

According to experts, through this ranking, Cameroon is reaping the benefits of the high penetration of smartphones in recent years, which boosted online shopping to the extent that, the e-marketer Jumia says, 65% of online orders in the country now go through mobile phones. A survey by French agency Mediametrie, let’s recall, showed the smartphone penetration rate improved from 68% in 2013 to 72% in 2016.

Another reason for this good performance by the Central African country is the rapid deployment of the internet over the past 10 years (from 2% to more than 20%). 23% of Cameroonians use this tool while three quarters of the African population do not yet have access to it.

But beyond these structural realities on ICT development, the growth of e-commerce in Cameroon was motivated by the arrival of international operators such as Jumia, which has been leading the market since 2013 when it settled in the country.

Digital 2019 Cameroun, published by Hootsuite has some interesting statistics on Cameroon, the report is embedded below