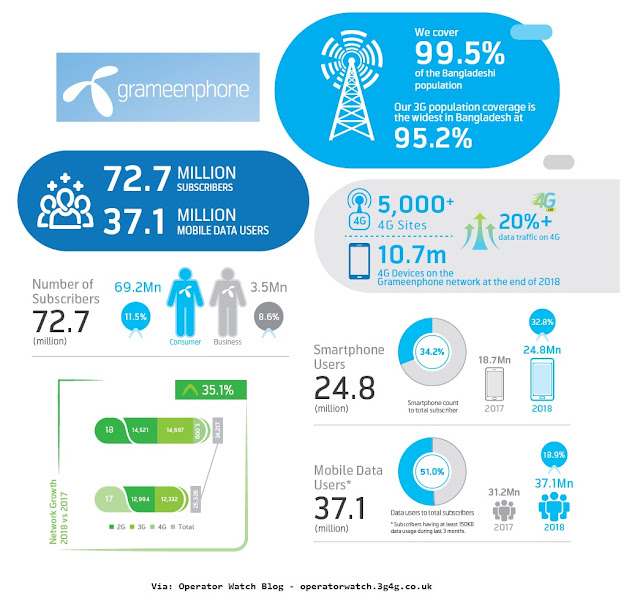 Grameenphone's annual report had some interesting details about the network footprint expansion, especially the 2G and 3G network. Here are the details:

Bangladesh Mobile Sector At A Glance

Bangladesh has made significant progress in growing its economy and improving the lives of its people in the last few years. The country is now working to reach upper-middle-income country status by 2021- the year that marks the 50th anniversary of its independence. It has been able to maintain a sustained economic growth rate of 7.86% in the last fiscal year.

Backed by this impressive economic growth, the Telecom sector of the country has made remarkable progress throughout 2018. At the end of 2018, there were 88 million unique mobile subscribers in Bangladesh, making it the fifth largest mobile market in Asia Pacific and ninth largest in the world. With subscribers owning on average 1.8 SIM cards, there were a total of 159 million connections in 2018, representing connection penetration of 94.5%. The Data market has also seen significant growth of around 15% and the total mobile internet connections stood at 87 million. With 45.3% unique mobile internet subscriber, there is still potential for further growth in data services. 2018 was an eventful year for the Telecom Industry in Bangladesh. A lot of initiatives have been taken and implemented by the Government and from the Industry side as well. The Government was very keen to introduce 4G service in Bangladesh and 4G licences were offered in the beginning of 2018. All the Mobile operators launched 4G services in the 1st Quarter of 2018. At the end of the year, the 4G subscriber base reached 5.5 million, with 3G and 2G subscriber base at 61 million and 89 million respectively.


The Government released more spectrum through the auction process in the 900, 1800 and 2100 MHz band and the long expected Technology Neutrality was sold to operators across the spectrum band upon payment of a one-time fee. Mobile Number Portability (MNP) was another agenda of Government that has been implemented in the 4th quarter. The country has sent its own satellite into orbit. A test trial of 5G network was also run in 2018.

One of the most important foundations upon which we deliver services to our customers is our network. In 2018, Grameenphone made significant investment in new 4G technology, spectrum acquisition and network capacity building. The Company invested BDT 34.0 billion to rollout more than five thousand 4G LTE sites, to expand 2G and 3G coverage, to effect capacity enhancement, as well as to build higher IT readiness. In total the Company has invested BDT 347.4 billion in Bangladesh since inception.

As one of the largest contributors, Grameenphone contributed BDT 84.2 billion to the national exchequer in 2018 which represents about 63.4% of Grameenphone’s total revenue for the year. By the end of 2018, the total contribution to the state by Grameenphone since inception reached BDT 669.5 billion.

In 2018, we launched our high-speed 4G LTE network. Data consumption has almost doubled since 2017 and 20%+ of our data volume is now being carried on the 4G network. 7 million unique users latched onto 4G LTE, which has an average speed of ~10 Mbps.

Grameenphone acquired new spectrum, a 4G licence and Tech neutrality on existing spectra. It was the first to launch 10MHz LTE immediately after licence was awarded by the regulator. By the end of 2018, Grameenphone rolled out ~ 5,009 LTE sites all across the country which has led the rapid growth in data consumption.

In 2018, Grameenphone reached the 72 million subscribers milestone, a true testament of the trust the people of Bangladesh have in the Company. Grameenphone was the first operator to launch a 4G network in 2018. This is a result of Grameenphone’s determination to serve its customers in the best possible way, ushering in new avenues for empowering societies by building and strengthening the country’s communication and connectivity with the rest of the world. Despite the fiercely competitive market, Grameenphone continued to contribute to its iconic status in the Bangladesh communications industry.

Overall, the year was marked by significant changes in the industry. Among these, Grameenphone closed 2018 with 3.4% year-on-year revenue growth over 2017. Strong drive in all segments of the business recorded consolidated revenue of BDT 132.8 billion for 2018. In the same timeframe, Grameenphone earned a yearly average Daily Subscription & Traffic Revenue of BDT 336.9 million, which is 7.0% up from that of 2017. The Company ended the year with 72.7 million subscribers, which represents a 11.3% sub base growth from last year.


In the framework of significant investment in new 4G LTE technology, spectrum acquisition and network capacity enhancement, data revenue continued its strong pace during the year to record 21.0% YoY growth. Rapid rollout of 4G data networks, fast proliferating mobile applications along with affordable smartphones in the market enabled internet to enter the customers’ everyday lives in newer ways. With more than five thousand LTE sites, Grameenphone received the recognition of the fastest internet network in the country by Ookla, the global leader in internet testing and ended the year with 37.1 million internet subscribers. 2018 also resonates Grameenphone’s passion for driving its vision towards inclusive empowerment of communities by leading the growth of technological services that are relevant and affordable to communities.

During the recent world cup, Grameenphone subscribers were able to watch Bangladesh matches on their phone. Here is an advert promoting it. We will soon find out what impact this made on the subscriber growth.