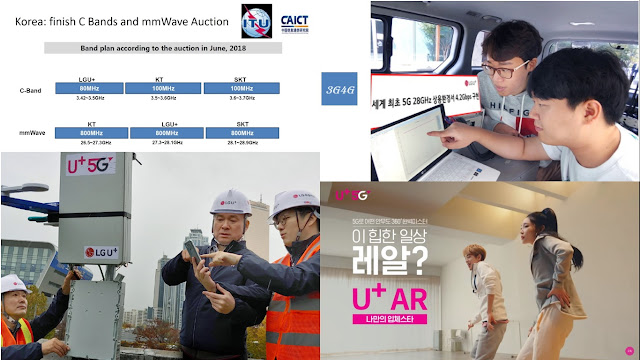 In a recent press release (no shareable link but press releases are here - see 27 Sep), LGU+ announced that they have tested 5G commercial environment in the 28 GHz band using 800 MHz bandwidth. I am assuming this means Carrier Aggregation. With this they have successfully verified 4.2 Gbps DL and 1 Gbps UL speeds.

This test is based on the 3GPP standard based on the 28GHz frequency bandwidth 800MHz allocated by LG Uplus, and tested by applying the terminal specifications expected to be released next year.

At the end of 2017, LG Uplus conducted a speed verification of 20Gbps maximum speed by combining 28GHz and 3.5GHz as non-standard equipment.

28GHz is installed in hot spot areas such as Hongdae and Gangnam, shopping malls and stadiums, and has a large amount of data and a large number of floating populations to provide stable high-speed services. do.

In particular, the maximum upload speed is 10 times higher than the existing LTE and 3.5GHz 5G speed 75 ~ 85Mbps, smart factories that require a lot of upload capacity. It is expected to provide a new service environment in the enterprise and industry areas such as 200 cars can be accommodated) and personal service areas such as real time live broadcasting and customer video transmission.

As 28GHz uses high frequency, it has high straightness and is affected by obstacles and has a small coverage, so it needs more careful base station location design and more time and effort for quality stabilization.

LG Uplus Sang-Heon Lee, NW Development Officer, said, “This test was conducted to prepare for commercialization, and to improve cell design and mobile / boundary quality advancement at the optimal location.” 28 GHz is one of the core values ​​of 5G. It is an important technology that provides ultra high speed, but it is difficult to handle, so we will thoroughly prepare to satisfy both speed and quality from the customer's point of view. ” 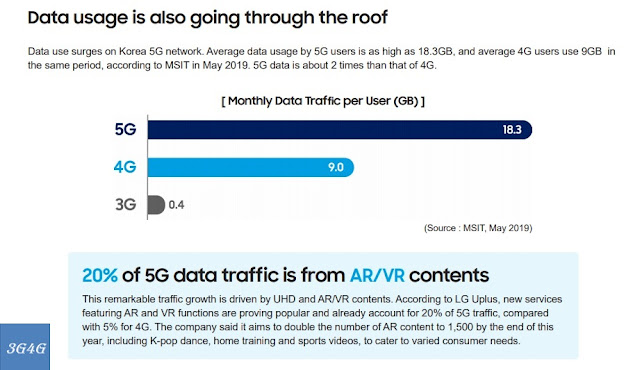 Average data usage by 5G users is as high as 18.3GB, and average 4G users use 9GB in the same period, according to MSIT in May 2019. 5G data is about 2 times than that of 4G. This remarkable traffic growth is driven by UHD and AR/VR contents. According to LG Uplus, new services featuring AR and VR functions are proving popular and already account for 20% of 5G traffic, compared with 5% for 4G. The company said it aims to double the number of AR content to 1,500 by the end of this year, including K-pop dance, home training and sports videos, to cater to varied consumer needs.

The above video is one of the adverts for the LG Uplus AR K-Pop (Korean popular music) app. K-Pop is a musical genre consisting of pop, dance, electropop, hiphop, rock, R&B, and electronic music originating in South Korea. In addition to music, K-Pop has grown into a popular subculture, resulting in widespread interest in the fashion and style of Korean idol groups and singers.

While it looks like 5G is making an impact for the operators and the users in South Korea at the moment, the real challenge is to see if this trend continues. Also, it may be a bit difficult to replicate this success in other countries. We will have to wait and see.
Posted by Zahid Ghadialy at 11:00