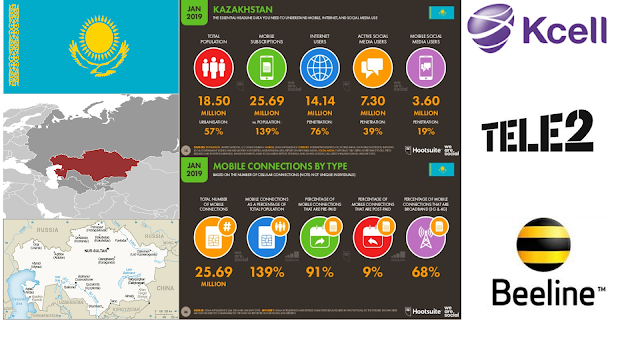 There are three mobile operators in the Kazakhstan market following the merger of Tele2 and Altel. The number one and two providers by market share, GSM-Kazakhstan (K'Cell) and Beeline dominate the mobile market. Kazakhstan's mobile market has reached saturation point. The number of fixed telephone lines in Kazakhstan, is slowly declining as the mobile segment continues to expand.

Kcell is the leading mobile provider in the country caring for 41% of mobile users. It's operated by GSM Kazakhstan Ltd. under the Kcell and Activ trademarks. It's partly owned by Swedish TeliaSonera and has the best coverage. Kcell’s 2G network covers 96% of the population and 47% of the territory, while its 3G services are available to around 70% of the people: Coverage map by region. Kcell launched 4G/LTE in 2016 in Almaty, Atyrau, Aktau and Shymkent and through network sharing with Beeline in further 9 towns, open for prepaid. It's on 800 MHz (band 20) and 1800 MHz (band 3).

Beeline is run by Kar-Tel under the license of Veon in Kazakhstan. Beeline charges lower prices than Kcell while it's network is almost as good as Kcell's. In 2016 it launched 4G/LTE in the cities of Almaty, Aksay, Uralsk and Astana on 800 MHz, 1800 MHz and 2100 MHz (Bands 1, 3, 20) opened for all users. Customers need to have one of the new 4G-enabled USIMs for LTE. By the end of 2017 they had covered 47% of population by 4G.


Tele2 used to be an operator solely owned by the Swedish Tele2 Group. It had about 4000 base stations covering 85% of population making it one of the smaller networks in the country. In 2015 they agreed to a merger with Kazakhtelecom, owner of the Altel network. The new company is now a joint venture of Tele2 and Kazakhtelecom.

Interesting and funny ad from them


Kazakhstan is one of the most advanced telecoms sectors in Central Asia. Their mobile market remains highly competitive, but rather than a focus only on growth in subscribers the market has shifted to value-added. All Kazakhstan’s major mobile operators are well on the path towards launching 5G services.

In mid 2017 the Kazakh government announced it will launch its Digital Kazakhstan program between 2017 and 2021, which aims to strengthen the national digital infrastructure and drive economic growth and competitiveness. The scheme is intended to raise internet penetration by 2021 and see the ICT sector contributing significantly to annual GDP by that time.

International Internet bandwidth capacity increased dramatically between 2014 and 2015, almost doubling to 850,000 Mb/s. The market is predicted to continue to grow strongly over the next five years to 2022.

Kazakhstan may become the first country in the Caspian region to launch fifth generation, or “5G,” wireless services. Bringing wireless, high-speed internet and mobile services to the vast plains of what is the world’s ninth largest country isn’t easy. Communications specialists will launch a pilot project later this year in the capital city of Nur-Sultan (previously known as Astana), as well as in the southern city of Shymkent and in Almaty – Kazakhstan’s former capital and largest city.
The goal is to digitize housing and public utilities, along with sectors like agriculture and health.