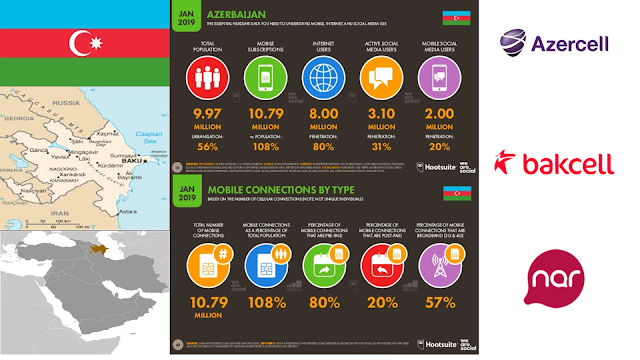 There are three major mobile operators in the Azerbaijan market. Azercell dominates the market. Bakcell and  Nar (Azerofon) account for the majority of the remainder of the market.  Mobile broadband subscribers have grown very rapidly over the past five years supported by widespread rollouts of 4G infrastructure and the release of a growing range of mobile broadband packages by the major mobile operators. Market penetration has increased from 107% in 2013, to over 110% by 2017. Moderate growth is predicted over the next few years to 2023. The mobile broadband market will be driven by increasingly faster speeds offered by the mobile operators as they roll out their 4G and 5G networks and falling prices due to growing competition.

Azercell is Azerbaijan’s largest mobile operator by subscribers, it is still owned by Swedish Telia group and Turkish Turkcell. Currently, 4.8 million subscribers choose Azercell services they control 49% of market share; while its geographical coverage constitutes 99.2% (excluding the occupied territories); and population coverage 99.8%.  But some of them are on 2G. 3G had started in 2011, to be followed by 4G/LTE in Baku and the Absheron Peninsula with 79% coverage of the capital and Absheron in 2017 and new in Ganja, Barda, Shamkir and Lankaran.

Azercell has selected Ericsson to modernise its radio access network (RAN), under a two-year programme including the nationwide supply of multi-standard radio equipment from Ericsson Radio System and a comprehensive set of services. Based on Ericsson’s RAN and services portfolios, Ericsson will evolve Azercell’s mobile network to be 5G-ready.

Bakcell was the first provider in the country established in 2002. It's partly state-owned and today no.2 in the market with a 30% user share.Today, Bakcell has the largest 4G network in the country in terms of coverage area and capacity, covering almost 91 percent of the country’s population and the central parts of all the regions of Azerbaijan (excluding Nakhchivan AR and occupied territories).

With more than 8000 base stations, Bakcell network covers 99 percent of the population and 93 percent of the land area of the country (except for the occupied territories). In 2017, Bakcell network has been recognized as the “Best in Test” in Azerbaijan by P3 Communications, being one of the most trusted independent authorities in mobile benchmarking. Bakcell has been recognized as the Fastest Mobile Network in Azerbaijan. This award, presented by world-famous “Ookla” company, recognizes Bakcell’s commitment to delivering fastest speeds to customers all across Azerbaijan.

Bakcell, recently entered into an agreement with Kazakhstani Transtelecom and KazTransCom to build a fiber-optic cable line stretching over nearly 400 km (249 mi) along the bottom of the Caspian Sea, which will help increase regional capacity and global connectivity. The initiative is a part of the Trans-Caspian ambitious project implemented by AzerTelecom within its “Azerbaijan Digital Hub” program. With the full completion of the Digital Hub program, Azerbaijan will shift from a local center to a regional hub in greater geography that includes the South Caucasus, the Middle East, and Central and South Asia regions, in which 1.8 billion – one-fourth of the world’s population –  lives.

Azerfon launched its activities in 2007 under brand name Nar mobile. Azerfon claims to reach 80% of the territory which is almost all given that some 15% of the territory is 'under occupation'. In certain remote areas Nar is the only provider offering service, but generally coverage is lower. In 2015 4G/LTE was launched in the city of Baku and 3G extended, but they remain at no.3 with a 25% user share. In 2019 they announced to have covered 97.6% of the country’s population by 3G.

Nar continues to expand its high-speed 4G network across the country. As a result of improvement and expansion works, 4G network now covers 91,5% of the population in the country. The mobile operator has successfully installed LTE base stations in 53 districts so far. Currently, every third customer of Nar is an active 4G user, while the total number of 4G users exceeds 850,000.

Nar provides its customers with the high-speed network with over 2740 4G base stations, including 1018 LTE-A type installed in 2019, as well as 2722 3G base stations. Currently, the mobile operator provides high quality service for more than 2,3 subscribers through over 8500 base stations.