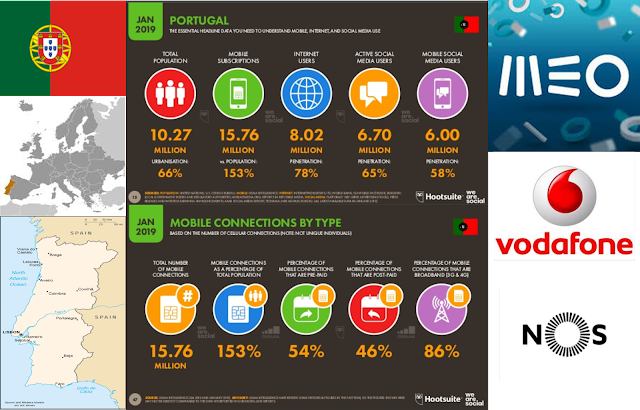 The mobile market is dominated by the incumbent Portugal Telecom, owned by Altice Group and operating as Meo, followed by Vodafone and NOS.

MEO now owned by Dutch Altice Group is the market leader with a 40% share. However the market share held by Meo has fallen steadily in recent years. Altice Labs began working with Ericsson to develop 5G services and applications in 2017.

They recently hosted an event (see video below) which was staged using an experimental network, in collaboration with Ericsson, and simulated a car crash to demonstrate how 5G’s lower latency, higher bandwidth and faster speeds can support emergency workers.

This demonstrated how 5G can support drone footage from accident sites and the delivery of vital information about victims and their condition in real-time.This event also marked the launch of the 5G experimental network for the City of Aveiro, which is aiming to be fully covered by 5G by 2020.

Altice Labs insist technology has no meaning if it is not for improving people's lives and they wish want to demystify 5G. The intense deployment of fibre optics and the modernisation of base stations in recent years across the country puts Meo in a more comfortable position in the evolution to 5G.


Vodafone Portugal is the major competitor of MEO in the country with a 33% share and according to Open Signal the best coverage and highest speeds on both 3G and 4G. It lets prepaid customers join their 4G network as part as an ongoing promotion for free. Also on top of 2100 MHz they also have 3G on 900 MHz allowing for better indoor coverage which is rare in Europe and not carried by all devices.

NOS, previously called Optimus, has the smallest network with a 20% share, but still gives a good performance.Vodafone and NOS recently signed an agreement to share fibre infrastructure, which pushed Vodafone’s addressable market to some four million premises. As a result of these efforts DSL is no longer the dominant platform for broadband access.