Tanzania has a Wide Choice of Operators 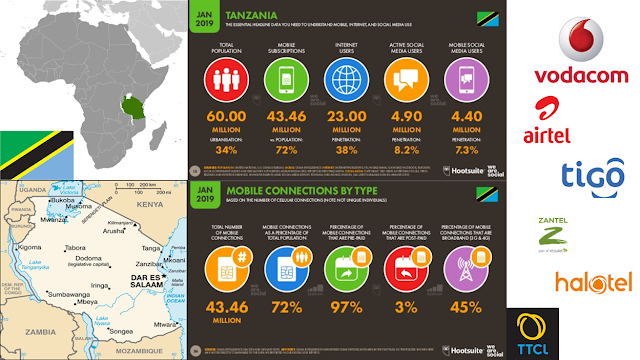 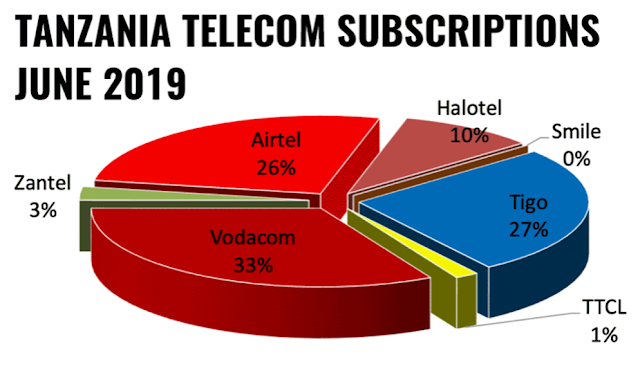 Vodacom  also intend to roll out 4G services  on the island of Zanzibar, off the coast of Tanzania in 2020.

Tigo has become the 2nd provider in Tanzania by market shares when it overtook Airtel in 2016. It's run by the Millcom Group that acquired the 4th provider Zantel  in 2015, but markets both brands separately. It was the first to start 4G/LTE on 800 MHz (B 20) in Dar es Salaam and is available for prepaid (coverage map) in Dar es Salaam, Morogoro, Dodoma, Tanga, Arusha with plans to extend connectivity to Mwanza, Zanzibar (Stone Town) and Kilimanjaro (Moshi). By 2017 it has been spread to 23 towns so far.

Halotel backed by Vietnamese Viettel entered the market in 2015. It's their 4th venture in Africa after Mozambique, Cameroon and Burundi under different brand names. Halotel covered more than 95% of the population in 26 provinces by 2500 antenna towers on 2G or 3G in 2017. They've reached a market share of 10% now and are planning to launch 4G/LTE.

Zantel used to be the local provider on the island of Zanzibar. That's why it has a good coverage there, but had almost no coverage on the mainland. It used to belong mostly to UAE-owned Etisalad, but was sold in 2015 to Millicom who runs Tigo. In 2016 it underwent a massive network overhaul. All clients can now roam on the Tigo network for free giving it a good coverage on the mainland. 4G/LTE started in Zanzibar on 1800 MHz (B 3) and roaming on Tigo on the continent.

Indian Bharti Airtel has falllen back as 3rd provider in the country. It has now a market share of 26% and a lower coverage than Vodacom, at slightly lower rates. Their coverage in Northern Tanzania, particularly Ngorongoro and Serengeti,  is superior to that of the other carriers. 4G/LTE is still in testing phase and not yet commercially launched.

TTCL for Tanzania Telecommunications Company Ltd. is the state-owned monopoly landline provider in the country. TTCL launched its 4G/LTE mobile data network in 2015 with a five-year rollout plan to cover all regions and main roads in the country called T-Connect. It started in Dar es Salaam on 1800 MHz FD-LTE (band 3) and 2300 MHz TD-LTE (band 40).

In 2016 they announced to deploy 4G/LTE services countrywide by 2018, as they intend to accelerate coverage. A number of regions that will benefit from the initiative in phase one: Arusha, Iringa, Mbeya, Dodoma, Morogoro, Mtwara, Mwanza, Tanga, Kilimanjaro and Unguja. Their products are more directed to home users in lack of a stable landline connection than to mobile internet users.

Recently the Tanzania Communications Regulatory Authority (TCRA) has threatened to disconnect over 39 million mobile phone subscribers who fail to register their SIM cards via the country's mandatory biometric system by 31 December 2019.

According to the regulator, to date only 5.2 million mobile phone users (12%) of the total number of subscribers have complied.

Vodacom Tanzania managing director Hisham Hendi has warned that the directive could negatively impact the company's operations, with the company so far having managed to register 2 million of the 14 million customers currently on its network.