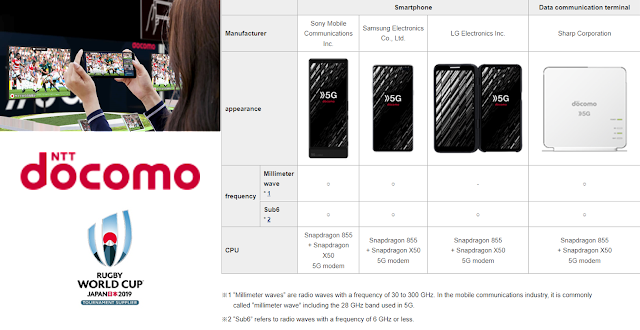 NTT Docomo has recently launched a pre-commercial 5G service in select areas of major cities in Japan, delivering on its commitment to provide trial coverage at stadiums for the currently ongoing Rugby World Cup. The stadiums at eight venues nationwide will be converted into 5G areas.

The pilot service in 11 locations, including Tokyo, Nagoya and Osaka, is designed to give customers a preview of the capabilities of the technology. A total of 7,000 5G-compatible devices will be available at the operator’s experience centres at stadiums and in some cities for visitors to try out. The devices from Sony, Samsung, LG and Sharp are not for sale.

Docomo which is Japan's largest mobile operator by subscribers (78.45 million as of February 2019) said it won’t be offering 5G smartphones from Chinese vendor Huawei because of concerns about restricted access to Google services.

There will be various initiatives at the Rugby World Cup 2019 for example Docomo will provide a multi-viewer that can simultaneously watch the game from multiple viewpoints at the stadiums of eight venues nationwide where the `` Rugby World Cup 2019 Japan Tournament '' is held and docomo's live viewing venue. They are offering new watching styles such as “Angle Viewing” and “Live Viewing” as well as news and broadcast styles as part of “5G Pre-Service”.

“5G Pre-Service Presentation” was held by NTT Docomo yesterday to show some of the services 5G will enable. Embedded below is a small clip showing how 5G devices will make an impact in sports, watching live and replays whenever you want pic.twitter.com/eEP03J4GEb
— 3G4G (@3g4gUK) September 19, 2019


While those outside the stadium can enjoy a innovative and powerful game watching experience due to Docomo transmitting multiple high-definition video and audio information via 5G communication.

Japan’s three major mobile operators – Docomo, KDDI and SoftBank – all aim to launch commercial 5G service in March or April 2020, in time to have their networks up and running for the Summer Olympics in Tokyo.

Docomo says they will expand 5G coverage by combining 5G networks with existing 4G networks using equipment from multiple vendors. They plan to deploy about 10,000 base stations by June 2021. The operators also aim for 60% population coverage by 2023.

While Japan was one of the leading voices in the 5G during the early years despite continued progress of the Japanese telcos, they have been overshadowed by others around the world have been much more vocal and ostentatious.

Also it doesn't matter how quickly 5G networks are switched-on whats more important is how  quickly the operators can provide the country-wide coverage.

This is a challenge which will be faced by every nation around the world, though with the Rugby World Cup and the Summer Olympics next year, Japan has an excellent opportunity to stake a claim for global leadership.