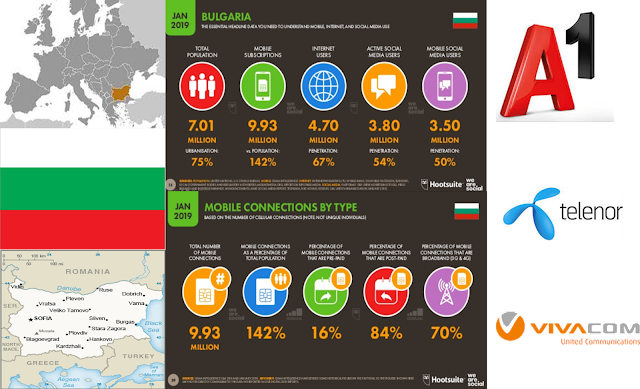 A1 Bulgaria is owned by Telecom Austria and was rebranded in 2018 from Mtel (Мтел), and before that Mobitel (Мобилтел).

A1 Bulgaria  has commenced trials of 5G technology, following the activation of one base station at the National Palace of Culture in Sofia. The trial, utilising spectrum in the 3.6GHz band and equipment provided by Nokia, will run for six months. The operator is aiming to commence commercial operations over its 5G network in 2020.

Telenor commenced its series of practical 5G technology tests by introducing the first remote medical exam over 5G in Bulgaria. The examination of a patient was held by Prof. Asen Baltov, Executive Director of “N. I. Pirogov” Hospital, who was at the Telenor headquarters in Sofia,
During the event, Telenor also made its first 5G video call in Bulgaria. Telenor also intends to  perform demonstrations of 5G technology beyond Sofia covering numerous other geographic locations across Bulgaria. These tests will be related to virtual reality and the streaming of video content and gaming which will be made publicly available. To make this possible, Telenor will use Huawei equipment, which includes both fixed base stations, as well as a mobile base station that can be transported across the country.


Vivacom (vivatel or BTC, BTK) is the 3rd provider in the country, but still has a good coverage in 3G in Bulgaria. In 2015 they were sold to Russian-backed Spas Roussev.

4G/LTE started in 2016 on 1800 MHz (B3) in the towns of Sofia, Pernik and Vratsa. The 4G network was extended to Varna, Bourgas, Ruse and Plovdiv. The operator has the country’s largest towns within its LTE footprint and 2100 MHz band is added.

In other 5G developments the European Commission has stated that the Bulgarian and Greek transport ministers, Ivaylo Moskovski and Nikos Papas, and Tatjana Matić of the Ministry of Trade, Tourism and Telecommunications of Serbia, have signed an agreement at the Digital Assembly 2018 in Sofia to develop an experimental 5G cross-border corridor that will test driverless vehicles.

They agreed to work together on the Thessaloniki – Sofia – Belgrade corridor, which will provide a technologically neutral hub for industry, research centres, academia and any other stakeholders for testing and evaluating innovative mobility technologies.

Mr Moskovski stated that Bulgaria is now preparing its infrastructure to accommodate a 5G network for ‘connected driving’. European Commissioner for Digital Economy and Society Mariya Gabriel added that “we have agreed that the digital transformation has its challenges, such as cyber attacks and the online spread of misinformation” and that “people need to trust and be able to take advantage of this digitalisation.”
Posted by Zaffareen Khan at 07:35