Serbia is Gearing up for 5G 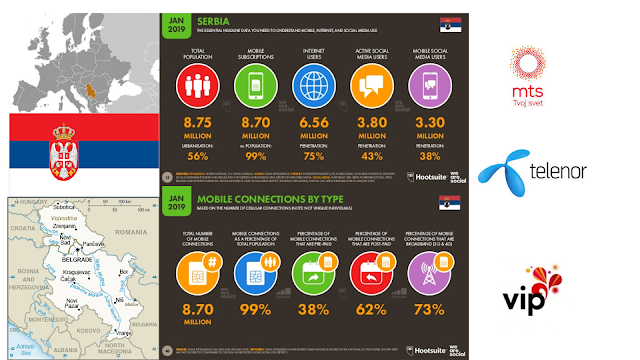 MTS (Mobile Telephony of Serbia - not related to MTS Russia) is a consumer brand of state-owned Telekom Srbija under which it offers and provides all of its services to both private and corporate users. At present they have 2129 LTE base stations and are the market leader in Serbia with 45.5% of all mobile SIM cards as of 2018.

MTS have carried out 5G tests in cooperation with Ericsson:


Telenor, formerly called Mobtel Srbija, was sold by the Norwegian operator in 2018 to the Czech PPF Group. It's the 2nd provider in the country with a 31% market share in 2018 and a good coverage.

4G/LTE has started in the two largest cities Belgrade and Niš and has spread to 41 cities in 2016 and currently is available for prepaid trough 1955 LTE base stations country-wide.

On the 22nd June 2019 Telenor launched the first 5G base station in Serbia in Science
Technology Park Belgrade, creating a 5G test environment that can be used by domestic and
foreign companies, startups and students of technical faculties to develop technological solutions
for the future.

Vip Mobile, owned by Telekom Austria, is the smallest provider in the country by customers. Nevertheless, it gives a good coverage. In 2016 Vip opened its 4G/LTE network which is the most widespread in the country right now to prepaid users trough 1912 LTE base stations. Netherthess they are the smallest network with 23% of all mobile SIM cards in 2018.

Serbia has also joined a European project to establish 5G corridors to test driverless cars.
Posted by Zaffareen Khan at 07:35