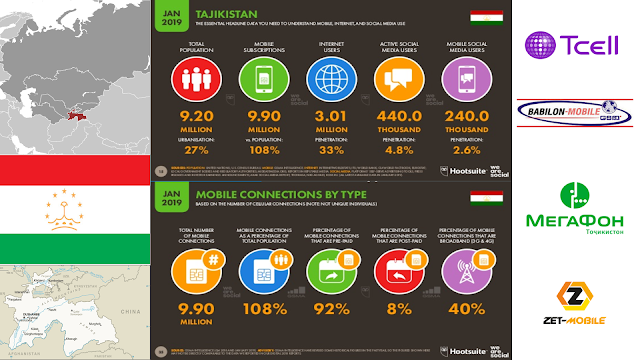 Tajikistan’s telecommunications infrastructure is arguably the least developed of all the previous Soviet republics,  With a telecom network that was near total collapse, the government had the daunting task of bringing it up to modern standards. Despite the launch of 4G/LTE services, the overall the telecom sector has continued to struggle. Tajikistan still has one of the lowest fixed-line penetrations in the Asian region and one of the lowest broadband levels of broadband penetration.

The mobile sector has been on a strong growth path for over a decade. It continues to be the standout feature of the country’s telecom industry. However, as the market has moved closer to a saturation phase there has been an inevitable slowing in the growth rate.They have seen a strong increase in mobile broadband penetration over the past four years however the mobile broadband market is still at an early stage of development and penetration remains relatively low compared to other Asian nations. Very strong growth is predicted over the next five years to 2023. The mobile broadband market will be driven by a rising level of mobile subscribers, increasingly faster speeds offered by the mobile operators as they roll out their 4G networks and improving tariffs due to strong competition.

Tajikstan is ranked 31st with a Telecoms Maturity Index score of 12. This places it in the Market Emergents category. BuddeComm’s “Asian Telecoms Maturity Index”, is an index (on a scale between 0 and 100) that measures and ranks the relative maturity of the telecoms industry in all of the 34 countries in Asia). Compared to other Asian nations, it has very low fixed-broadband penetration and very low mobile broadband penetration.

According to a World Bank Report despite modest improvements to international bandwidth (to about 6-8 Gbps), Tajikistan’s data transmission speeds remain the slowest among regional peers and other small, landlocked countries. Such slow international bandwidth speeds cannot support significant increases in trade in services, the development of a knowledge economy, or reposition Tajikistan as a regional hub. Though Tajikistan’s difficult geography is a factor in the slow technological development, a lack of adequate government initiatives/planning do not help either. For example earlier this year, the state anti-monopoly agency announced that mobile telecommunication services providers would be permitted to sell online data for no less than 5 dirhams per megabyte. With sales taxes and surcharges factored in, that would have amounted to $6.50 per gigabyte of traffic (up from the previous ceiling of $3.40), but the proposal was dropped after much public indignation.

Tcell is the dominant mobile provider in the country. It has more than 2/3 of the national subscribers. It was owned by Swedish Sonera group, who decided to exit their Asian markets and divested it to the Aga Khan Fund for Economic Development (AKFED) in 2016.

It has the best coverage in 2G and 3G. 4G/LTE started in 2014 in the capital of Dushanbe and Ghafurov, Chkalovsk, Khujand and Kayrakkum on 800 MHz. By 2019 Tcell claimed to have the widest 4G coverage in Tajikistan, having reached seven major cities plus several other towns by the end of 2017.

Tcell has announced that it is the first operator in the country to receive a commercial 5G licence, also claiming that it will ‘launch the first 5G network in Central Asia’. A company press release lacked details such as 5G spectrum band(s) allocated or launch timeframe, however. The release highlighted how ‘the introduction of 5G technology will allow Tcell to create a new technological basis for Tajik society’, supporting ‘government e-services, smart cities and innovative entrepreneurs’, adding that ‘for the full implementation and development of  5G services. Tcell has to do a lot of work and make considerable investments to prepare the existing platform. Tcell claim they have already started this investment.

Tajikistan-based mobile operator Babilon-M is the 2nd provider in the country. It was the first to launch 4G/LTE in 2012 using 1800 and 2100 MHz in Dushambe. Recently it has expanded the coverage of its LTE network for the first time. New cities covered by the expansion include Khujand, Qurghonteppa (formerly known as Kurgan-Tyube) and Kulob.

Russian-owned MegaFon operates 2G and 3G networks in Tajikistan. As of 2014 it was the country’s 3rd largest mobile service provider in terms of subscribers with a 20% market share. In 2014 MegaFon’s 4G LTE pilot network covering the cities of Dushanbe and Khujand was started available over its 800 MHz LTE test network. The 4G network is now available in the cities of Dushanbe, Khujand and Kurgan-Tube.


Beeline is the smallest operator in Tajikistan now with a 2G and 3G network, but no 4G/LTE: 2G/3G coverage area. It has the lowest coverage in the country at the lowest prices too. In 2018 Russian-backed, Amsterdam-headquartered VEON agreed to sell its stake to Tacom which is 100% owned by ZET Mobile, itself reportedly owned by Hasan Asadullozoda, the brother of President Emomali Rahmon’s wife. It was announced that it will rebrand as ZET-Mobile on 1 June 2019. The operator has begun replacing its logo at its offices, shops and service outlets and has launched a new tariff plan under the ‘Z’ banner.