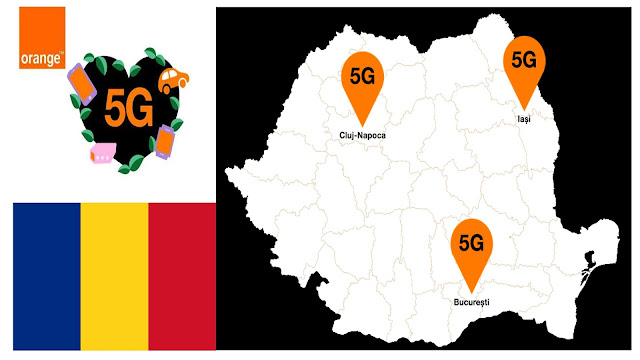 Orange has entered the 5G fray with the launch of its first commercial network within its footprint, deploying the technology in three major Romanian cities. The operator launched 5G services in capital Bucharest, Cluj-Napoca and Iasi, with other Romanian cities to follow from 2020 onwards. At a launch event Ramon Fernandez, deputy CEO for Finance, Performance and Europe, explained the country was a natural choice to lead the operator’s 5G charge, having been a key part of its footprint since 1997. He also said the operator had invested “more than €3.5 billion” in its Romanian operations over the past 22 years.

Fernandez explained the operator deployed 115MHz of spectrum in the 3.4GHz to 3.6GHz bands, “more than double” the amount available to competitors. Orange stated the network offers peak download rates of 1.2Gb/s, with average rates of 600Mb/s.


Orange is the largest operator in Romania with 10.3 million connections according to GSMA Intelligence, just ahead of rival Vodafone’s 10 million.Vodafone and number four player Digi launched 5G earlier this year.

This launch and this network is the result of an attractive exclusive partnership with Samsung. An interesting partnership which works both ways. Samsung devices can only be sold by Orange, and Orange 5G tariffs can only be run through Samsung devices. It might sound unusual that two companies would want to limit this potential in this manner, but considering Orange is the market share leader for 4G (roughly 40%) while Samsung is the devices market share leader (estimates range between 50-55%), there are attractive gains for both parties.


The second interesting element of this announcement is the focus on Fixed Wireless Access (FWA). Orange has never been shy about its convergence ambitions, the success of bundling is evident in numerous markets but with no fixed assets in Romania it becomes difficult. There is a wholesale agreement in place with Telecom Romania, however this is far from an ideal position.

With 5G, FWA becomes a much more apparent opportunity to compete with the fibre services which are being offered by competitors. It certainly isn’t perfect by any means, but if Orange can deliver the promised gigabit speeds over the air, there will certainly be demand from increasingly speed obsessed consumers.

The final interesting aspect of this story could count against the Orange. After performing a number of speed tests across Bucharest, it became very apparent, very quickly, that the 4G network is excellent (60-96 Mbps), providing speeds which even the most demanding consumer could not make use of. In delivering such eye-watering speeds over 4G, one should ask whether this weakens the selling point of 5G. As attractive as 1.2 Gbps download speeds are, who actually needs that much power right now?

Despite the number of features and wild promises here, the success of Orange Romania in the 4G era might undermine the pursuit of early adopters for 5G. This is a difficulty which only remains while the operators discuss little more than speed upgrades, though as the ecosystems develop new services will be pushed at the consumer.