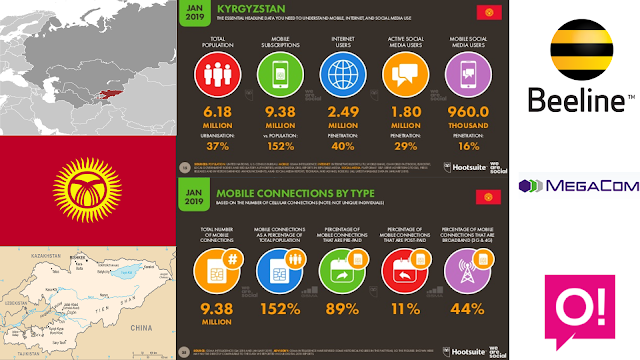 The mobile subscriber growth rate in Kyrgyzstan has slowed considerably over the past four years due to a mature mobile market. Mobile broadband continues to grow strongly in Kyrgyzstan. The mobile broadband subscriber penetration has grown strongly over the past five years. 4G networks now cover over 50% of the nation as the major mobile operators gain momentum in their rollouts.

Strong growth is predicted over the next five years to 2024. The mobile broadband market will be driven by increasingly faster speeds offered by the mobile operators as they roll out 4G and eventually 5G networks and improving tariffs due to strong competition.

There are three GSM-based operators in Kyrgyzstan: Beeline (by Sky Mobile), MegaCom (by JSC Alpha Telecom) and O! (by Nur Telecom).

Beeline operated by Sky Mobile is the biggest competitor of MegaCom in the country and has a 36% market share. It has a limited 3G coverage shown. In 2016 it added 4G/LTE on the 800 MHz (B20) frequency.

MegaCom, owned by JSC Alpha Telecom, is the market leader in this country with 37% customer share. It has the best coverage: 98% of the population are covered by 2G and about 2/3 of the populated areas by 3G in 2015. This means that you have good coverage in the cities, but it can become patchy elsewhere.

In 2017 3G frequencies on 900 MHz were added for more coverage. They started 4G/LTE in the cities of Bishkek, Osh and Jalal-Abad in 2016 and started in regional cities in 2017, partly open for prepaid.

MegaCom has launched a ‘Safe City’ project in the capital Bishkek in collaboration with Russian company Vega with applications to include video surveillance of road traffic.

Kyrgyzstan has also seen growing interest from China’s tech giants, with Huawei now connecting eight in every 10 Kyrgyz residents to the outside world. The company has been making significant strides to secure lucrative deals as first supplier for the country’s top telecommunications providers such as Sky Mobile.

However its usually the security services that China targets most directly in order to win a place in Central Asia. Since May, China has provided buses, minibuses, SUVs, armored police cars totaling about $4.3 million to Kyrgyzstan’s Ministry of the Interior. At the same time, an agreement was concluded on the introduction of video surveillance systems in the country.

For Central Asia’s fragile states, the technology is a welcome boost in monitoring their own populations. But it’s also a dangerous entanglement with a power that has already used that technology to imprison and oppress at home. Debt to Beijing, meanwhile, continues to pile up.

Smart cities are part of a strategy formulated in 2015 to turn China into the world’s foremost tech superpower by 2025. Packaged as the Digital Silk Road, the initiative aims to boost the country’s tech giants worldwide, construct China-centric digital infrastructure, and gain a monopoly over the global data supply chain. Chinese companies have been buying footholds in the region’s digital infrastructure. Huawei, the beleaguered 5G giant, is a key player in China’s smart cities program.

There are genuine civic benefits from the smart cities program, such as traffic safety and law enforcement. While the project could enhance digital connectivity in developing states such as Kyrgyzstan, critics point out that it may also spread authoritarianism and increase dependence on Chinese loans.