Oman: On course for 5G 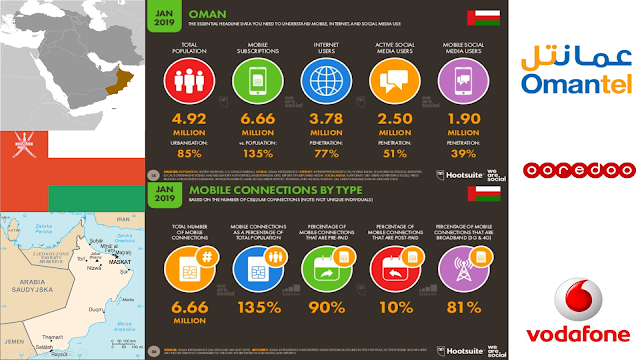 The Sultanate of Oman has established a progressive mobile sector which comprises substantial coverage of both 3G and 4G LTE networks. There have also been trials conducted, networks upgraded, and spectrum allocated, in readiness for 5G.

The mobile sector in Oman is led by Omantel and Ooredoo, and both operators have a similar, and sizeable, market share. The two mobile network operators (MNOs) were awarded 15 year licenses in 2019.The mobile industry became more competitive in the last decade or so, due to the introduction of MVNOs, which have captured around 11-12% market share.

Omantel is the Sultanate’s incumbent telecoms operator and primary provider of internet in the country on landline and ADSL. It's mostly state-owned and market leader in mobile networks too. In 2018 it reached 56% of the market.

It has the best coverage and speeds and most customers. It's mobile branch is also known as Oman Mobile. Its 4G/LTE reaches most populated areas

In 2019 Omantel, announced that its network was 5G ready. Ericsson in association with Oman Telecom Authority and Omantel hosted an event in Muscat highlighting how 5G connectivity is making the future a reality. During this technology event, visitors experienced a range of 5G use cases from smart cities to virtual, augmented and mixed reality. The demos displayed how 5G-capabilities such as low latency and high data rates, combined with Augmented Reality (AR), can enable new and innovative real-time applications and services.

Use cases included 5G Football demo highlighting how 5G will transform gaming. In addition, City Model demo presents flexible and cost-effective solutions for businesses, charting the potential of using today's infrastructure to build tomorrow's 5G networks. Other exciting demos included the Augmented Reality Carousel, which outlines how the digital transformation of different industries will be powered by 5G and IoT using simple, intuitive yet powerful tool like AR.

Ooredeoo is the 2nd provider in the country still giving good coverage in 3G and 4G. 3G covers 90% of the population and has reached 96% coverage of the Sultanate’s population with its ‘SuperNet’ 4G/LTE mobile network in 2019.

Ooredoo from Qatar has acquired the majority of the operator which was called Nawras before and renamed it to Ooredoo in 2014. It's the no.2 slightly behind Omantel at 46% share of the market in 2018. Generally Ooredoo has lower prices than Omantel at a slightly lower coverage.

The launch of a third mobile network operator in Oman in 2020 will increase competition further. Oman’s Telecommunication Regulatory Authority (TRA) recently signed a strategic MoU with The Vodafone Group, along with a local consortium of investors, to form a third mobile network operator in Oman which will be branded as Vodafone. This new company will develop “new services … to drive the next stage in the development of the country’s telecommunications market”, the joint statement said. The new operator is expected to begin commercial operations in the second half of 2020.

According to the Oman TRA, it has begun early preparations to enable companies to provide 5G services and exempt companies from annual frequency usage fees for one year to encourage investment in the sector. In the next five years, 4400 stations will be constructed by Omantel and Ooredoo and they will conduct workshops to inform relevant government agencies of the applications in preparation for their readiness to use it.

Oman is well positioned to be a technology hub in the Middle East as it is well located between Asia, Africa and Europe and has access to several submarine cable systems.
Posted by Zaffareen Khan at 07:35